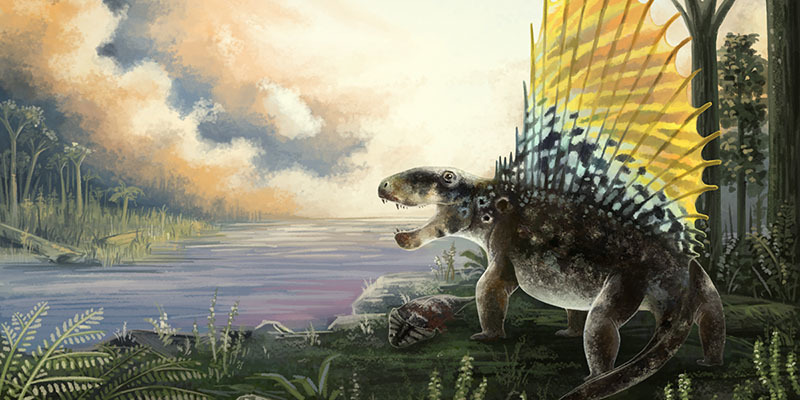 Dimetrodon and its sail

about 3 years ago by Katherine Kurowski

All Posts
Sometimes in a toy dinosaur set you’ll find Dimetrodon, the one with the massive sail on its back. But Dimetrodon doesn’t belong with the dinosaurs. In fact, it’s not even a reptile. Although misidentified, Dimetrodon ranks as one of the most recognizable of extinct animals because the form of its sail is quite memorable. But it’s the sail’s function that is the real mystery.

Dimetrodon belongs to a group called the synapsids, which includes all living mammals and a menagerie of extinct animals extending back to about 305 million years ago. Being an ancient animal that looks different from modern-day mammals, non-mammalian synapsids are often mistaken for reptiles, and dinosaurs. Although synapsids and reptiles descend from a common ancestor, neither group is directly ancestral to each other. Plus, Dimetrodon became extinct about 60 million years before the first dinosaurs even evolved. That’s almost the same amount of time that separates humans from Tyrannosaurus.

Dimetrodon was extremely successful. Its fossils have been found in many locations including the United States, Canada, and Germany, and throughout many different layers of rock, suggesting a long history. Since the first description of the genus Dimetrodon in 1878, both researchers and the public have wondered about the purpose of the massive sail.

Because of the sail’s size and imposing appearance, scientists proposed that it could have been used for intimidation or defense. However, these theories don't hold fast when you consider that Dimetrodon species were medium- to large-sized carnivores and the apex predators of their communities. The different species ranged in length from 1.7 to 4.6 meters (5.5 to 15 feet) and weighed between 30 and 250 kg (65 and 550 lb). They were the predators of such large prey as the amphibians Diadectes and Eryops, the latter could reach about 90 kg (200 lb) in adulthood. In addition, the sail was a relatively weak structure; the upper parts of the spine were embedded in a thin, soft tissue and lacked muscles. So, it seems unlikely that the animal would develop such a defense mechanism that couldn’t really defend against predators that, well, didn’t really exist. 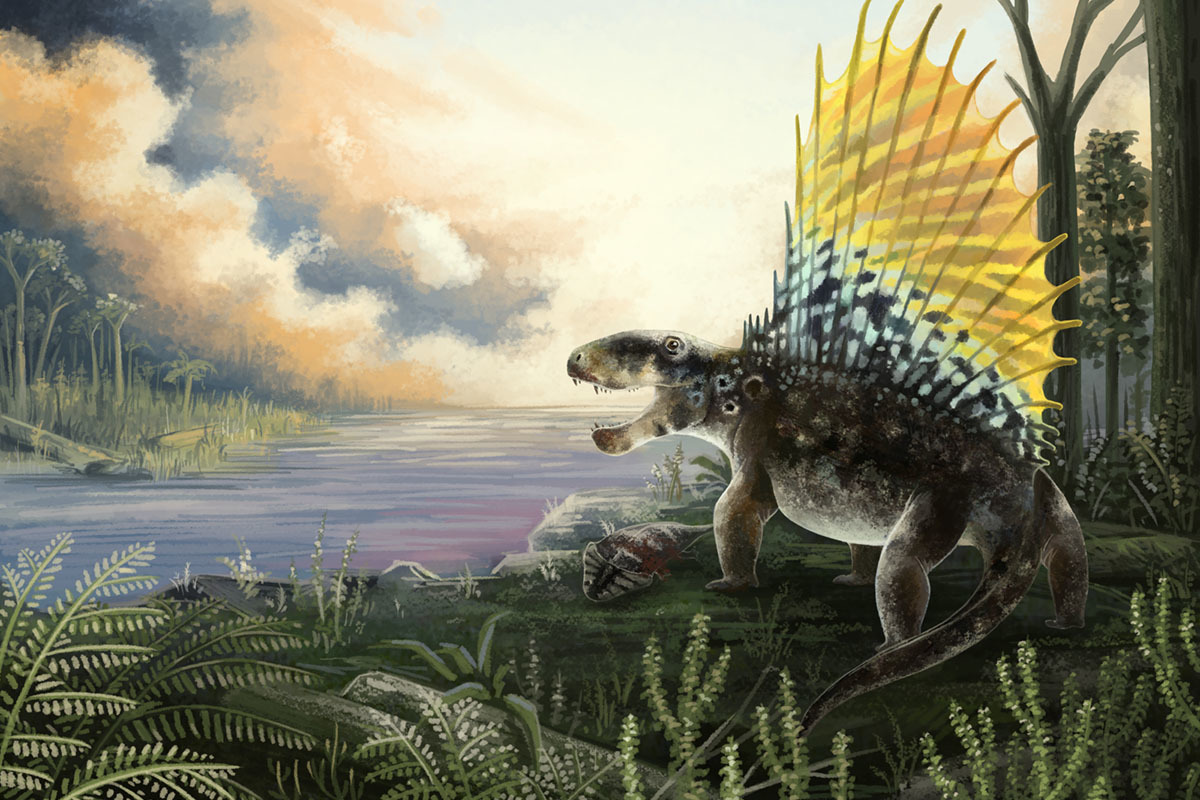 This sailed reptile-like animal is not a dinosaur, or not even a reptile. In fact, it’s a distant cousin of mammal and lived over 40 million years before the first dinosaurs appeared.
Franz Anthony

When hunting, Dimetrodon may have been an ambush predator—waiting for its food to come along—so maybe the sail helped with camouflage? However, it seems odd that an already large animal trying to hide in the foliage would sport a “billboard,” advertising its presence. Camouflage would have been much better achieved without the sail.

The word sail typically conjures sailing ships, so perhaps the sail’s function was similar to the one used on a boat, to help navigate through the water. However, using the sail as a sail would cause too many disadvantages and not enough to compensate for any usefulness while in the water. Other hypotheses have included the sail as a hearing support, like the tympanic membrane in our ears, or as having no function at all, instead representing “excess vitality.” These hypotheses, especially the latter, seem unlikely. Why expend so much energy to create something useless?

There are two contending hypotheses that hold some promise. They are the regulation of body temperature and display variations between the sexes. All sorts of animals have evolved exuberant appearances to attract potential mates, and the sail is believed to have served a similar purpose. Although both females and males had sails, the sail could have possibly changed color during the mating season. However, testing for display function is difficult, and any remnants of such superficial features haven’t been found in fossils.

Curiously, Dimetrodon was not the only sailed-back animal of the Permian Period. The herbivorous synapsid Edaphosaurus also had a sail but with crossbars. Although Dimetrodon and relatives (sphenacodontids) and Edaphosaurus and relatives (edaphosaurids) are closely related, their sails evolved independently. This coincidence of sail evolution in separate groups suggests that something the two groups shared in common must have triggered this feature. The environment, perhaps? 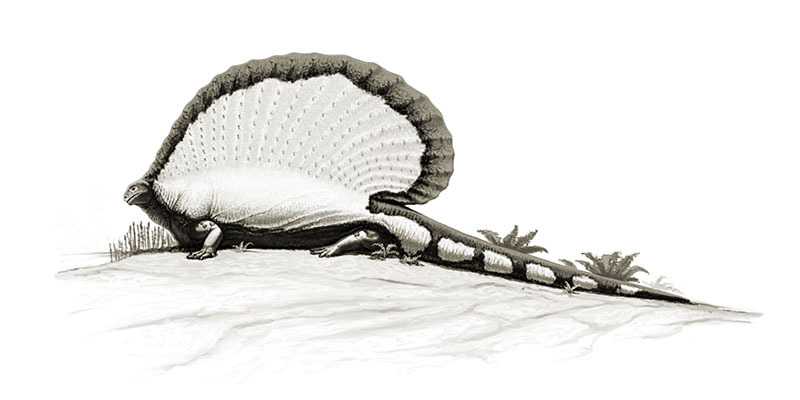 Like Dimetrodon, Edaphosaurus was a close cousin of mammal’s ancestors. Interestingly, the two aren’t closely related and had evolved their sails independently around the same time in history. Image by Andrey Atuchin.


The Permian Period was a “chilly” time, with temperatures ranging between 9°C (48°F) and 19°C (66°F). There is also a widespread perception that Dimetrodon and its closest synapsid relatives had reptile-like cold-blooded, or ectothermic metabolism. That means Dimetrodon would have needed to bask under the sun to reach a certain body temperature to be productive. The sail, which was rich in blood vessels as evident in fossils and which greatly increased the animal’s surface area relative to its volume, could have likely helped Dimetrodon quickly warm up in the cool mornings and cool down during the hot middays. Being able to regulate its body temperature, and to do so quickly, gave Dimetrodon the advantage as a predator. In the morning, it could hunt while its prey was still groggy, thus avoiding the need to subdue the intended meal and the risk of injuring its own fragile sail.

Numerous researchers used models of Dimetrodon to test the effectiveness of the sail as a portable heating and cooling unit. The results varied widely. Some researchers concluded that the sail was good at both absorbing heat and cooling. Others concluded that the sail was only good at absorbing heat. Estimates of the timing it takes for body temperature to increase by 11°F (6°C) differed between studies, from 80 minutes to 4 hours. The ability to lose heat was said to be “not impressive,” even detrimental on very hot days when overheating may occur. This risk of overheating is what some think may have contributed to the animal’s extinction when the world got warmer.

This lingering uncertainty of whether the sail was for heating or cooling and its effectiveness for either renders thermoregulation as the primary function to be dubious. It is likely that the sail served a multi-purpose function instead. These sails, after all, were large, intimidating, energy-expensive structures that increased the apparent size of the animal.

Despite synapsids having been the most successful land animals of their time and Dimetrodon’s fame, synapsids are largely unknown to the public. Further research into these animals will not only make these animals known but also illuminate the evolution of mammals.

References
Angielczyk, K. D. (2009). “Dimetrodon Is Not a Dinosaur: Using Tree Thinking to Understand the Ancient Relatives of Mammals and their Evolution.” Evolution: Education and Outreach, 2: 257–271.


Related Stories
Dimetrodon relative shows warm-bloodedness is older than we knew
Lesser-known mass extinction event killed three-quarters of land animals
Cockroaches shall not inherit the Earth, beetles shall
Terror birds had booming calls
Animal may be earliest known to walk upright on all fours
//sulc.us/jht8t
/articles/dimetrodon-and-its-sail/