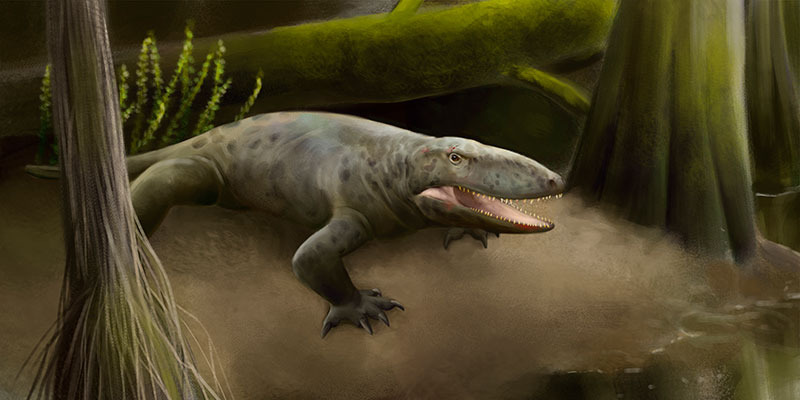 Dimetrodon relative shows warm-bloodedness is older than we knew

All Posts
Ophiacodon was a reptile-like cousin of mammals that lived around 300 million years ago, but surprisingly an analysis of its bones indicates that it was already warm-blooded long before true mammals evolved.

Generally speaking, animals today can be divided into two groups: “cold-blooded” and “warm-blooded”- or in technical terms, ectotherms and endotherms respectively.

Invertebrates, fish, amphibians and reptiles fall into the former category, while mammals and birds fit into the latter. While there are some oddballs that don’t fit into this black-and-white categorization, like tuna fish and leatherback sea turtles, the rule of thumb is usually applicable.

Ectothermic animals depend on the environment to regulate their body temperature. They need to seek shade when it’s too hot or sunbathe when it’s too cold, and often go dormant for long periods of time to conserve energy. This may seem like a disadvantage at first, but cold-blooded animals need a lot less food to survive and so can withstand periods of scarcity more easily.

Endothermic animals, on the other hand, can convert the energy from the food they eat into internal heat. That’s why even little mice can survive a snowy winter, while lizards either avoid cold places altogether or are forced into hibernation when the temperatures drop too much.

Traditionally, scientists believed that the first true warm-blooded animals were mammal ancestors that appeared around 270 million years ago. Birds would evolve from non-avian dinosaurs a bit later, independently evolving a similar metabolism. An ancient relative of the famous sail-backed Dimetrodon has challenged this assumption, suggesting that a warm-blooded metabolism evolved much earlier in the mammal lineage.

Of course, it’s not possible to directly measure the body temperature of long-extinct animals, but having a warm-blooded metabolism leaves clues in an animal’s skeleton that can be used by paleontologists to determine whether they were closer to reptiles or mammals in terms of metabolism.

Mammals can use their natural generators to fuel a fast growth. In contrast to most reptiles that grow more or less steadily throughout their whole lives, mammals tend to have a period of fast development until they reach maturity and stop growing. This is enabled by a special type of bone called fibrolamellar, that can grow rapidly while maintaining a stable structure.

Now, a study led by Prof. Martin Sander from the Steinmann Institute for Geology, Mineralogy and Paleontology at the University of Bonn has found this same fibrolamellar bone in the humerus and femur (the upper arm and leg bones) of Ophiacodon, a very early mammal relative that looked somewhat like a lizard or a sail-less Dimetrodon.

The discovery of this special kind of bone in Ophiacodon fossils is evidence that it could also grow rapidly, which in turn means that it probably had an endothermic metabolism to sustain this growth spurt.

Ophiacodon lived 300 million years ago, during the Carboniferous period. That was at least 30 million years before the appearance of the first true known mammals, indicating that the furry creatures did not invent warm-bloodedness but rather inherited it from their more reptile-like forefathers.

This discovery is already remarkable in showing that a higher metabolism may have evolved earlier that we thought, but the authors of the study also speculated about another possibility.

Ophiacodon appeared on Earth very shortly after the time when the ancestors of mammals and reptiles diverged. This means that it was closely related to the last common ancestor between the two groups, which explains why it looks so reptilian while technically being closer to us humans than to lizards in the tree of life.

So the fact that it was already warm-blooded means that it could potentially also have inherited this trait from this last common ancestor, which was one of the first land vertebrates to evolve. This would mean that all cold-blooded reptiles today actually developed their ectothermy as an adaptation, rather than having it as the primitive condition. This may sound counter-intuitive, but if we remember that they can survive on less food and go dormant during harsh periods, this could have been an advantage.

For now, however, this is just speculation. Until we find conclusive evidence for this theory, it’s safer to assume that Ophiacodon was one of the first creatures to develop this breakthrough that allows us to playfully make angels in the snow rather than having to sleep throughout the whole winter.


Related Stories
Dimetrodon and its sail
Lesser-known mass extinction event killed three-quarters of land animals
Cockroaches shall not inherit the Earth, beetles shall
"Scissor-tooth shark" Edestus thrashed its prey to death
Animal may be earliest known to walk upright on all fours
//sulc.us/t0r9g
/articles/dimetrodon-relative-shows-warm-bloodedness-is-older-than-we-knew/