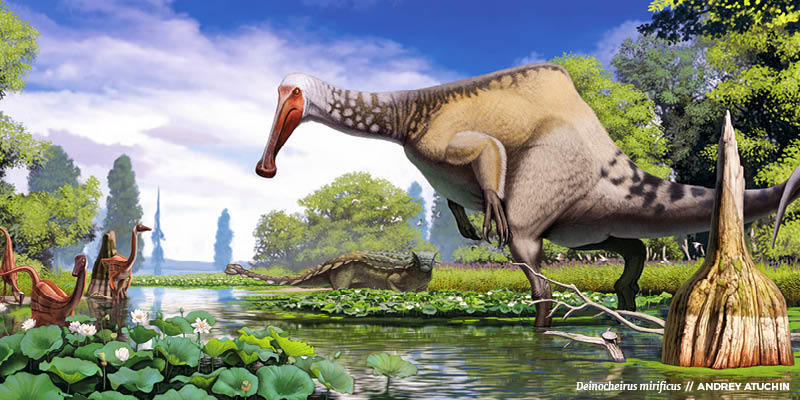 All Posts
In 1965, a pair of arms as long as a full-grown ostrich's height were discovered in Mongolia. For more than 40 years, the rest of the animal remained a mystery.

The Polish-Mongolian team, not to be outdone, also found some extraordinary dinosaur fossils including a pair of giant arms from a theropod, or bipedal carnivorous dinosaur. The arms were named Deinocheirus mirificius, whose name means “marvelous terrible hands.” Each arm measured 240 cm (nearly eight feet) from shoulder joint to finger tips; the longest arm of any dinosaur that stood on two legs. The hands had three long fingers tipped with claws, making Deinocheirus seem like a horrifying monster. 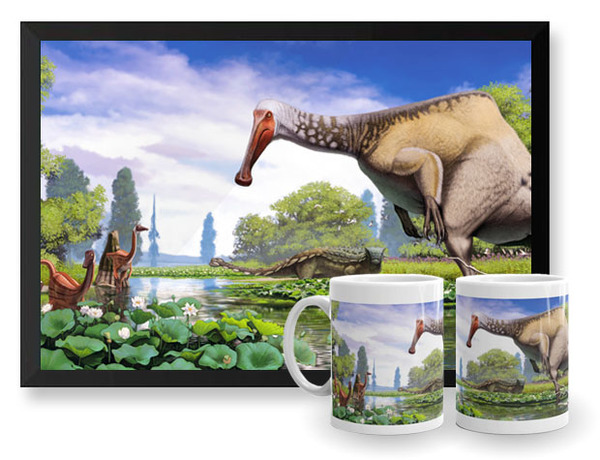 Get Andrey Atuchin's Deinocheirus as an art print or merchandises from 252MYA.com 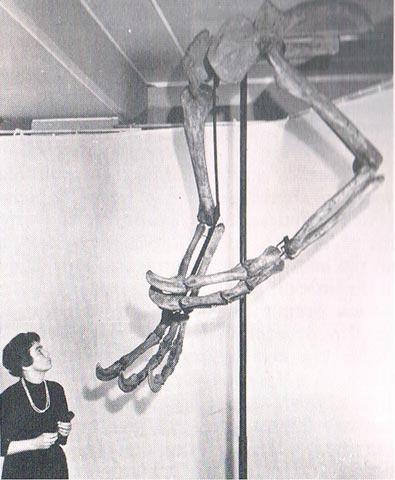 ”Terrible hands” Image by Everything Dinosaur
The original specimen of Deinocheirus with Zofia Kielan-Jaworowska, the leader of the Polish-Mongolian team.

Early depictions of Deinocheirus imagined an enormous long-armed carnivore as large as Tyrannosaurus. Subsequent research suggested that Deinocheirus was an ostrich-like dinosaur, technically known as an ornithomimosaur, based on the proportions of the bones of that hand. Still, the dinosaur remained a great mystery for decades.

That all changed in the early 2010s. Rumors circulated of new material in private hands that had been illegally exported from Mongolia. These rumors were later confirmed when the fossils were repatriated to Mongolia. This was followed by a 2013 presentation and a 2014 publication by Yuong-Nam Lee and colleagues revealing two newly discovered specimens of Deinocheirus. Both specimens had been partially collected by the previously mentioned poachers, but Lee's joint Korean-Mongolia team also excavated what they left behind in the ground. The two new specimens show that Deinocheirus was indeed an ornithomimosaur, but also one of the most bizarre dinosaurs known.

An adult stood 5 meters (16 feet) tall, and measured more than 10 meters (33 feet) in length. The skull was very long, narrow, and tall, with a wide bill at the end. Viewed in profile, it might resemble a toucan with an ice scraper on the tip of the bill. The jaws had no teeth, but instead bore a beak. The enormous head and long neck led to a sail-back pot-bellied torso atop stout legs that did little running. The sail-back was formed by long spines on its vertebrae and form a point over the middle of the back making it look like a hump-back. Round stones discovered in the rib cage have been interpreted as gastroliths – stones that are swallowed and held in the gizzard to to grind tough food. Other ornithomimosaurs and their closest relatives are known to be feathered, so it's likely that Deinocheirus was feathered too.

Deinocheirus mirificus, by Andrey Atuchin
Deinocheirus was a giant ostrich dinosaur with a bizarre and unexpected anatomy.

Deinocheirus is known from the 70-million-year-old Nemegt Formation, one of the world's most productive dinosaur graveyards. The Nemegt Formation was formed by an inland delta – a river that drains into a shallow basin within a desert but evaporates rather than forming a lake. The Okavango Delta in Botswana is a modern example of an inland delta, and shows a large concentration of animals living in and around a seasonally swampy environment. A huge number of herbivorous theropods including many other ostrich dinosaurs and several cassowary-like oviraptorosaurs lived in the swampy Nemegt environment. Other theropods include sickle-clawed raptors and tyrannosaurs.

Although ornithomimosaurs are generally considered to be herbivores, this isn't certain for Deinocheirus. In addition to gastroliths, Lee and colleagues report that fish-scales were found in the belly, showing that Deinocheirus may have been an omnivore. Although it was not a fast runner, its large size and long-clawed arms show that it was no pushover. Healthy adults were unlikely to have any predators except possibly tyrannosaurs.

The 40 year old mystery of Deinocheirus has been solved by the eventual discovery of more complete specimens showing an animal that no one imagined. A great number of dinosaurs are known from partial remains, and paleontologists all hope for future amazing finds.