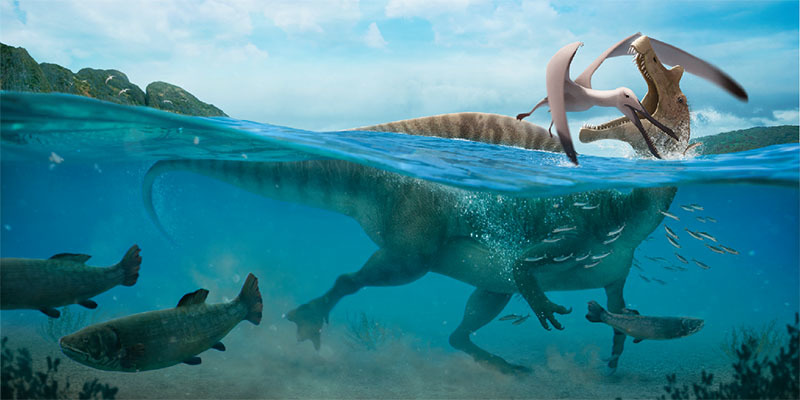 almost 3 years ago by Franz Anthony

The sail-backed Spinosaurus from Africa is one of the best-known dinosaurs in popular culture. Its large size and semi-aquatic lifestyle sets it apart from other predatory dinosaurs. Unfortunately, their patchy fossil record hides so many secrets about Spinosaurus and its close cousins, collectively known as spinosaurs.

But a broken leg bone, a tibia, from Araripe Basin in northeastern Brazil might reveal more about this elusive family of dinosaurs. The two continents may now be an ocean apart, but these separated cousins are a reminder of a time when the two landmasses were joined back in the Early Cretaceous Period. Though incomplete, this particular fossil tells an interesting story about South American spinosaurs.

First of all, a slice of this bone reveals that the animal was heavy-boned. The wall of the bone has thickened, leaving very little gap in the middle that’s typical of land-dwelling dinosaurs. Such adaptation is commonly found in other terrestrial animals that went back to live in shallow waters such as manatees, platypuses, and marine sloths. It is expected that the extra density prevents the animal from floating at the surface like ducks — or even us humans— when it’s not actively trying to dive. 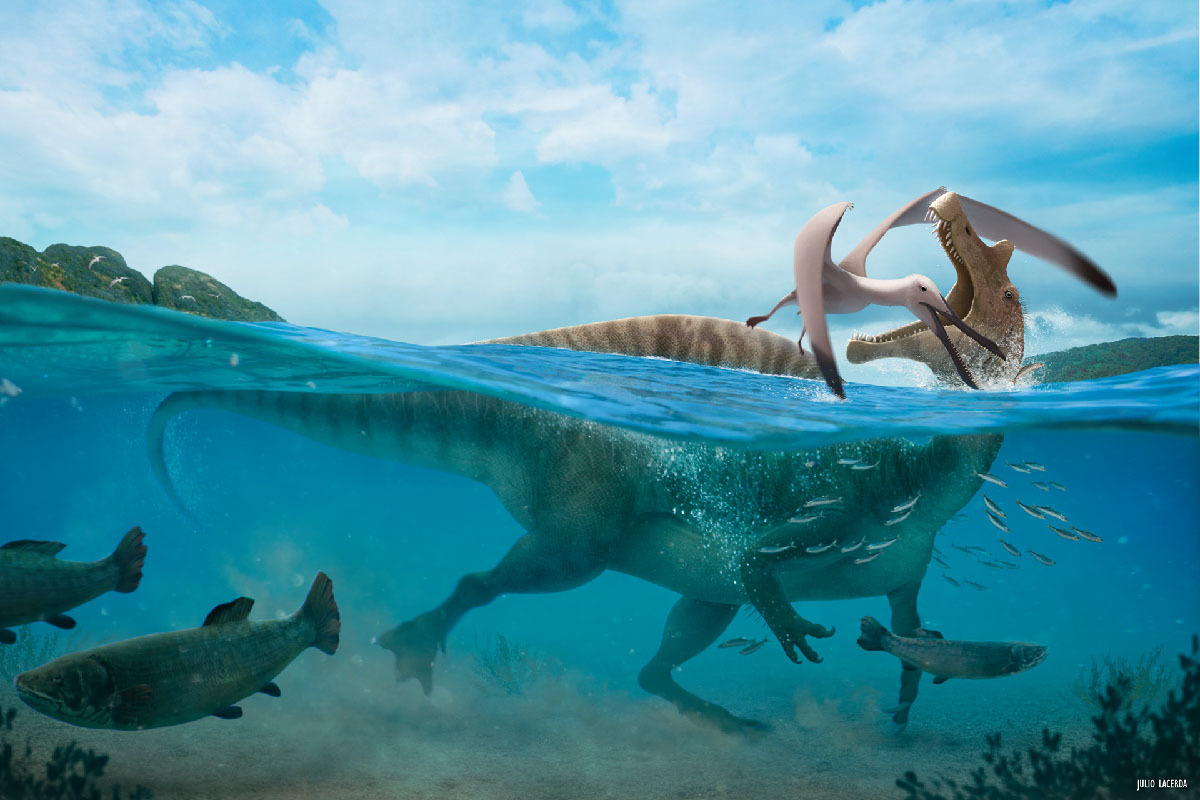 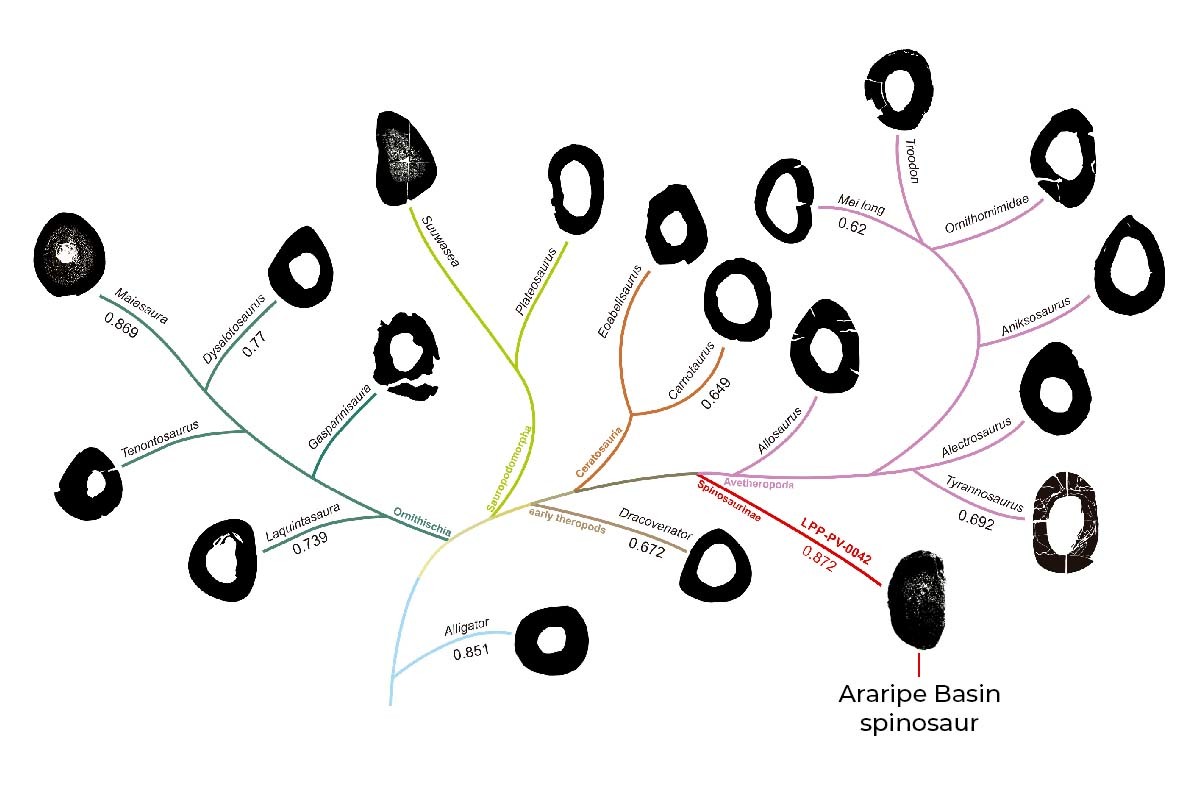 The slice of the spinosaur's bone, marked with red, is denser compared to other dinosaurs in the family tree (and an alligator, marked in blue)
Aureliano et al. 2018

This increased bone density echoes the suspected aquatic lifestyle of the African Spinosaurus, even though the Brazilian fossil lived ten million years earlier. It means the affinity for swimming might have run deeper in the family tree than previously observed.

Another notable quality about this fossil is its size. When compared to other spinosaurs, it’s likely that this particular animal was around 10 m (33 ft) in life, making it among the largest spinosaurs found in South America. Interestingly, the bone’s structure suggests that the animal wasn’t fully mature at the time of its death, so it could have grown even larger had it lived longer.

In life, the animal would have patrolled a coastal lagoon rich in fishes and other marine creatures. Unlike Spinosaurus, however, it was not under the pressure of competition from other large predatory dinosaurs on land, making it the potential apex predator of its environment. Although it lived with other fish-eating animals like pterosaurs and crocodile relatives, their size differences allowed them to coexist by taking on different prey objects.

At this point, it’s hard to tell the true identity of the animal based on a single bone. In the area, there are two different spinosaurs recognized by paleontologists, named Irritator and Angaturama. To make things complicated, Irritator’s skull is missing its snout, while Angaturama is only known from a broken snout. This minimum overlap prevents paleontologists from telling with certainty whether Irritator and Angaturama belonged to the same species or not, let alone comparing them with a broken leg fossil.

This unfortunate situation seems to be a common issue in the region, where most of the fossils are unearthed illegally. When they end up in a researcher’s hands, not much is known about where exactly they came from and the environment the fossils are found in.

Regardless, this broken fossil helps us piece together the life history of the iconic sail-backed dinosaurs. By looking into several other spinosaur fossils from the region that haven’t been studied, we will one day get to know their family even better.

A video summary of this study is also available as a video.