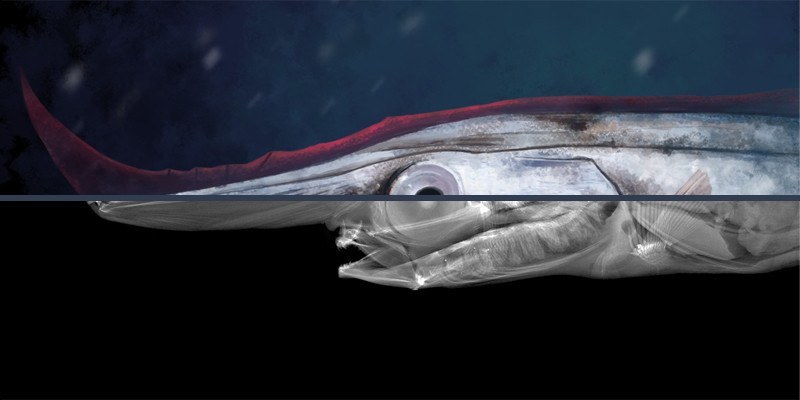 A bare-bones look at bizarre fish

All Posts
Modern fish make up a huge part of Earth’s ecosystems, and cover a lot of niches. Predators, omnivores and herbivores are all found in this diverse group. Millions of years of adaptation has sculpted their bodies into the various forms and shapes we see today.

Think about hammerhead sharks, whose modified heads are used to scan the sandy bottom of the sea, or pipefish that mimic sea grass in order to survive. Today there are 33,100 different species of fish in our rivers, canals and seas. To fit all of the different niches, fish have evolved in a lot of different ways. Why is one species very spiky and the other one fully streamlined? And why do some fish have a flat body and are others eel-like?

Looking at the skeletal morphology – or shape – of the fish provides us new insights into their lifestyles. This story highlights some species that were displayed during the X-ray Vision: Fish Inside Out program organized by the Smithsonian’s National Museum of Natural History and the Smithsonian Institution Traveling Exhibition Service (SITES). Artist Franz Anthony has reconstructed the fish as you would see them in life and you can pull the slider back and forth to reveal both images. 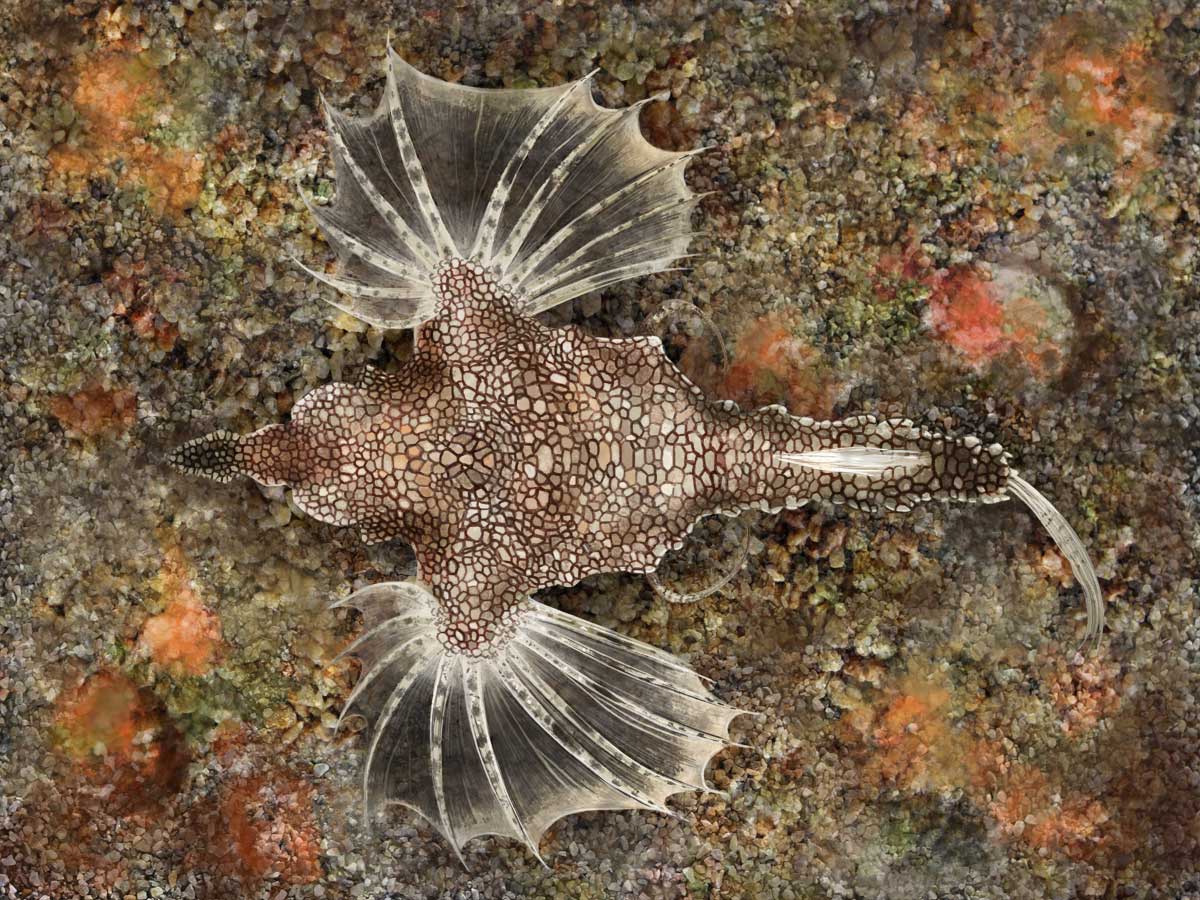 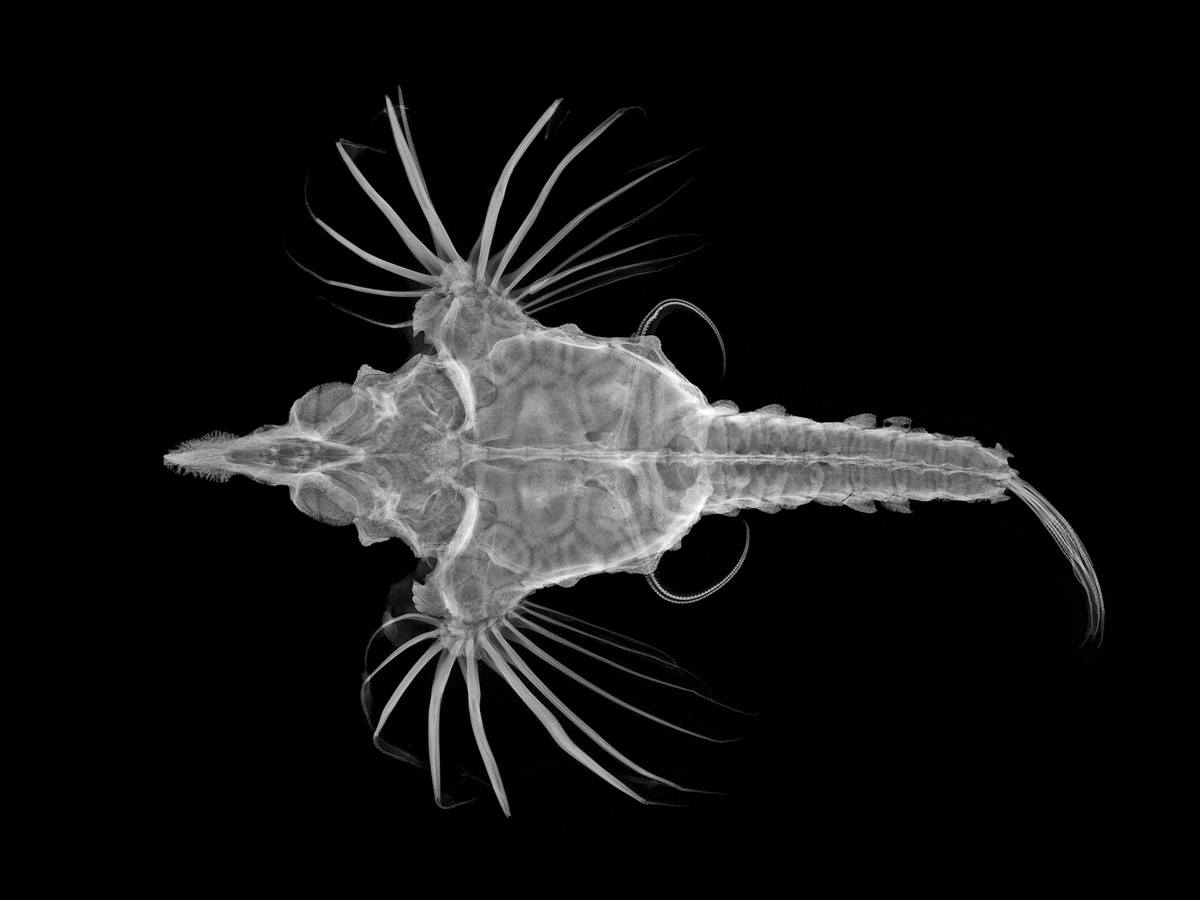 Classified under the family Pegasidae (named after the Greek mythological creature Pegasus), sea moths are bottom-dwelling fish found from the Red Sea to the central Pacific. This camouflaged fish is characterized by its big pectoral fins that help it glide through the water, a big “snout” for sucking up prey, and strangely formed pelvic fins. Pegasids tend to keep as low to the ground as possible, only swimming when provoked. This is why the pelvic fins have evolved into hook-like structures without a swimming function. The fish “crawls” on the seafloor with these hooks and remains as still as possible to ambush small prey. Sea moths have been observed changing their color and shedding their skin completely, which may happen once every few days. 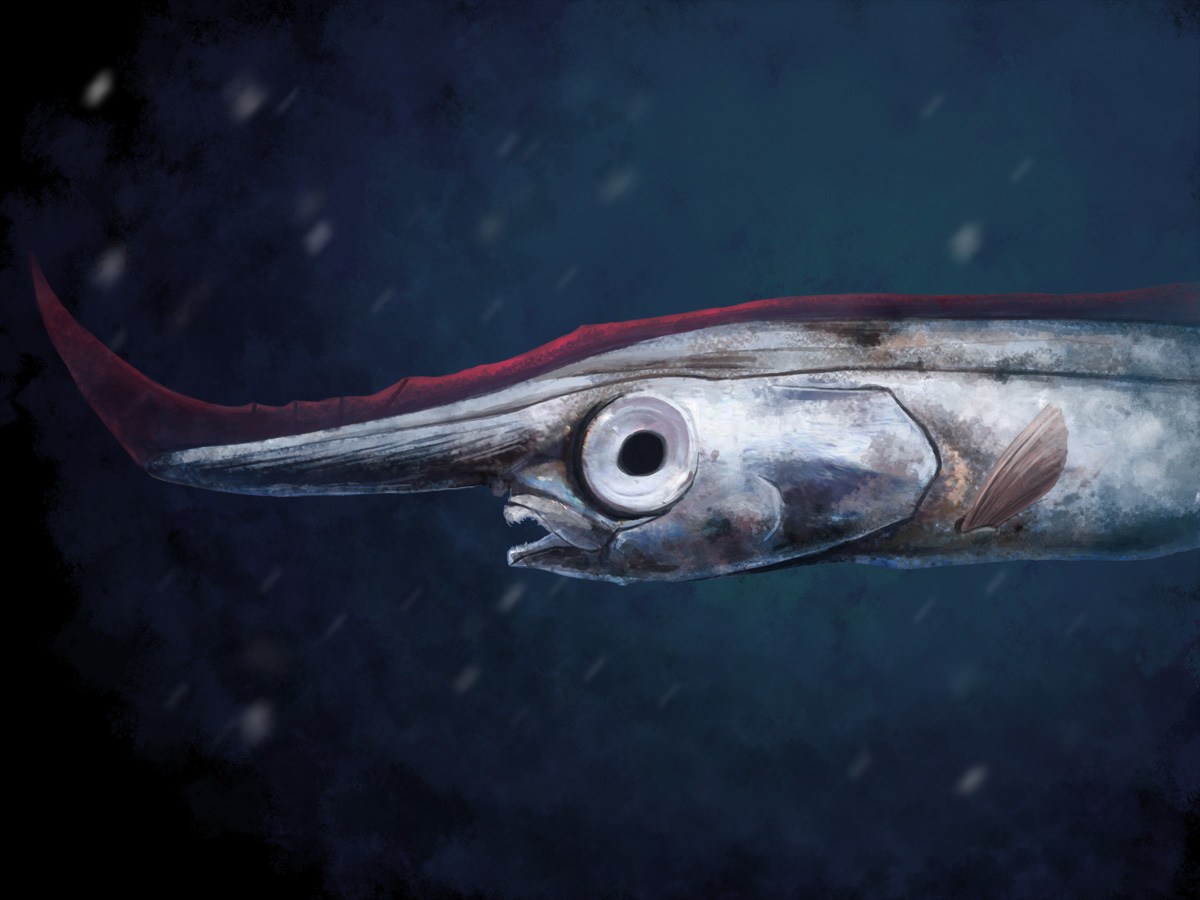 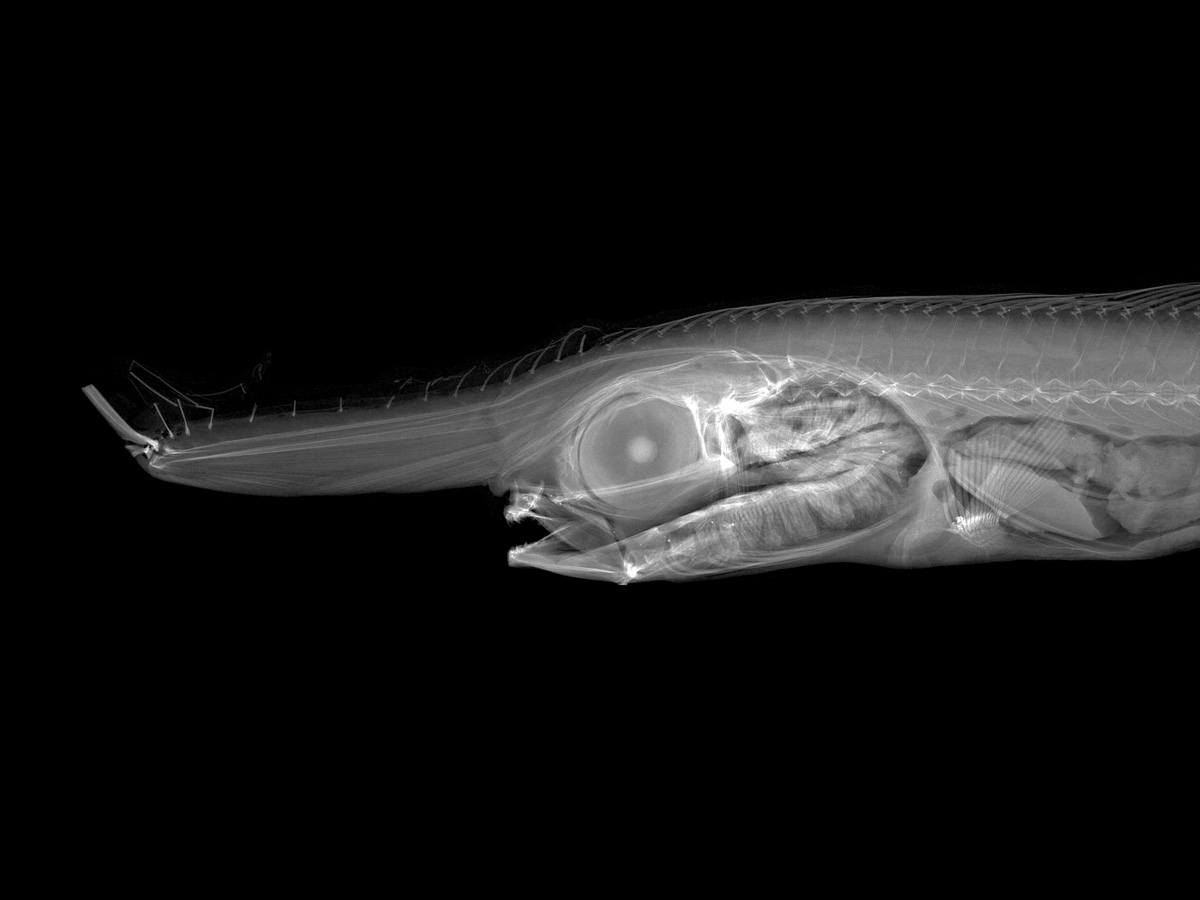 The unicorn crestfish belongs to the same family as the “sea serpents” fishermen often mistook for sea monsters from ancient times. Living in the open waters at around 1000m (3300ft) deep, not much is known about this elusive species. The pelagic lifestyle can be seen in the body plan of the fish – its long slender body allows it to move easily through a large body of water. Despite its specialized body, however, fossil records suggest that this species’ early relatives looked more like their shorter, round-bodied cousin the opah. The unicorn crestfish can reach the size of around 130cm (4ft) and it makes up for its short snout by having a extensible upper jaw which helps it to feed. 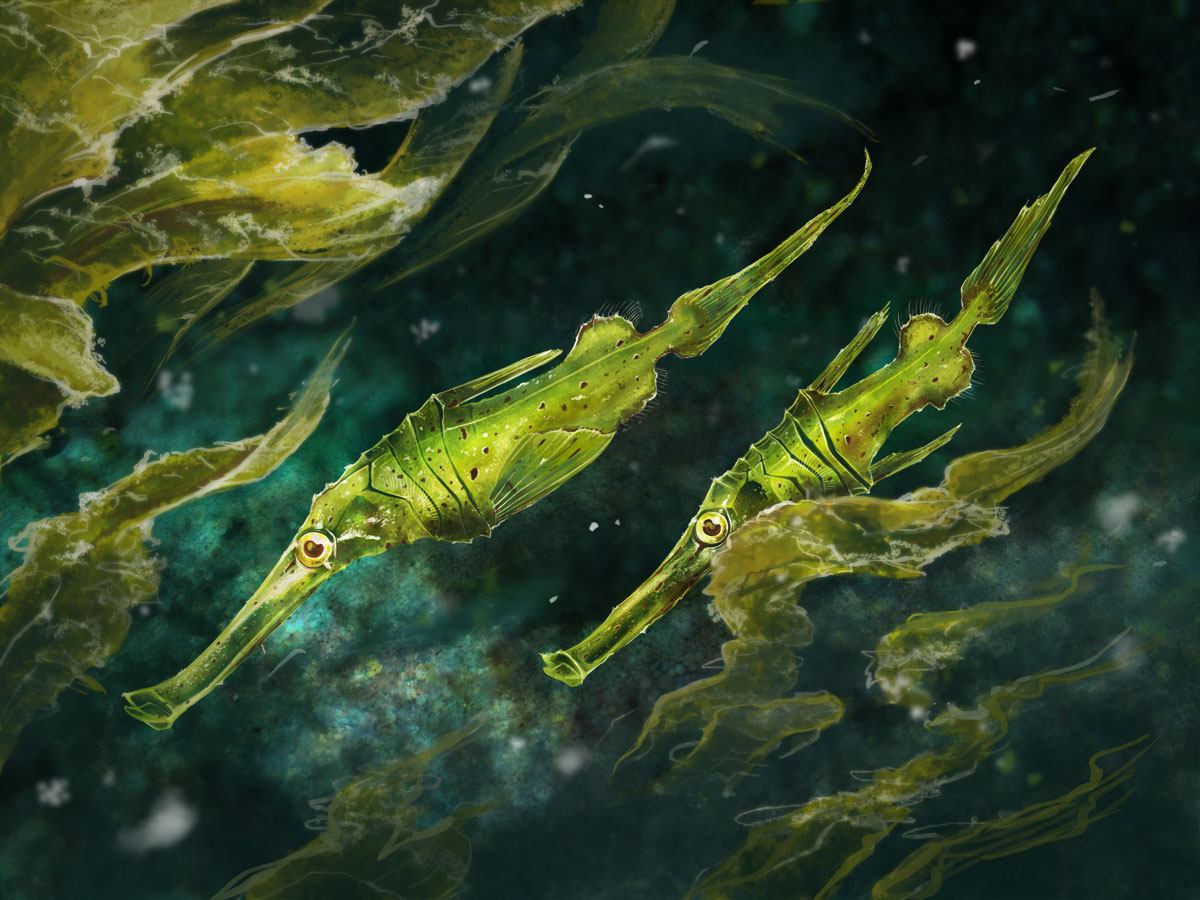 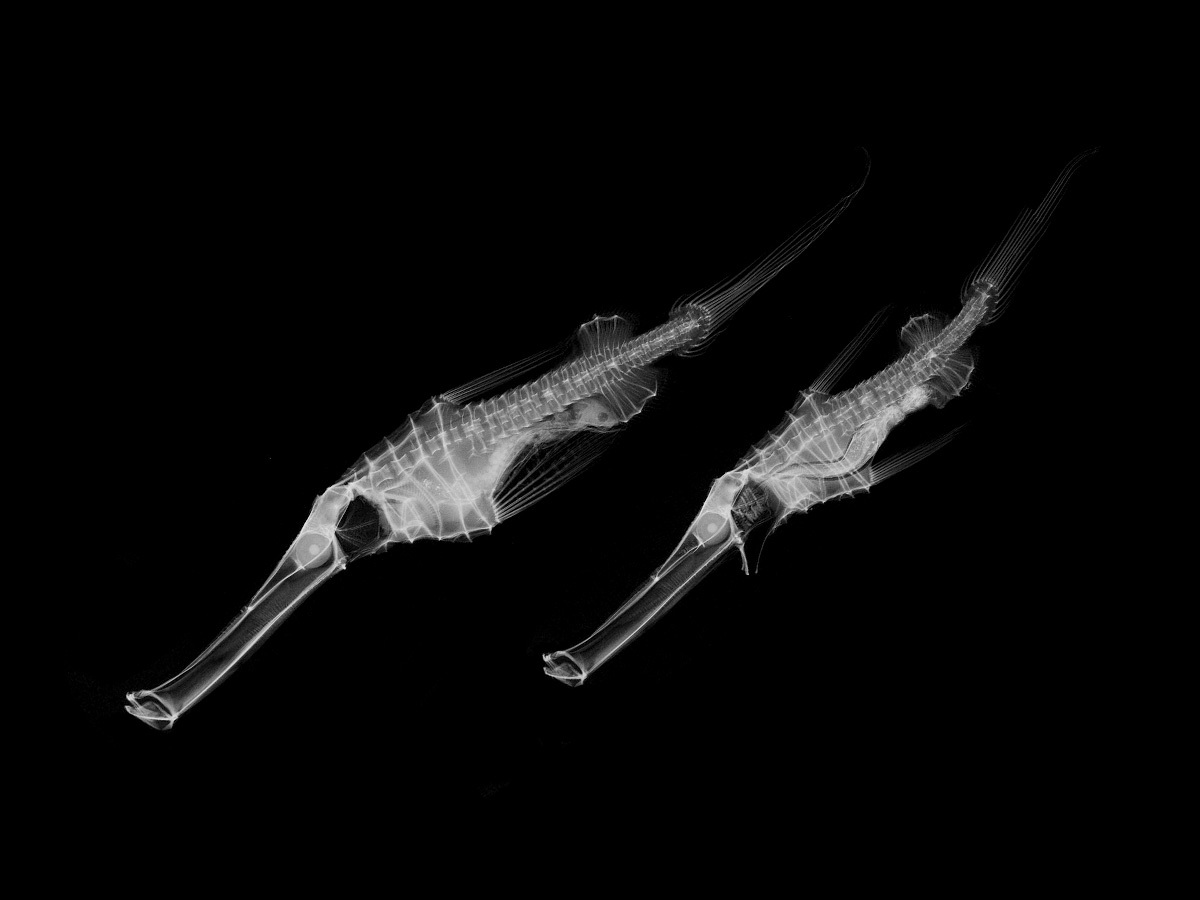 Although some fish choose an explosive escape, some fish prefer to completely blend in with the background. Just like its close relatives, the seahorses and sea dragons, the ghost pipefish is covered with bony platings that slow down its movement. To compensate for this, it developed a body-plan specialized to perfectly copy its surrounding by mimicking sea grass, giving the ghost pipefish its common name. Native to Pacific waters, it is associated with specific sea plants living in the same regions. The fins of these fish are evolved to be as small as possible and its mouth has been formed into a trunk-like snout. The mimicking of the sea grass doesn’t stop there though. The coloration of the fish is almost identical to the plant, with some ghost pipefish capable of mimicking the swaying of the leaves in the ocean currents. 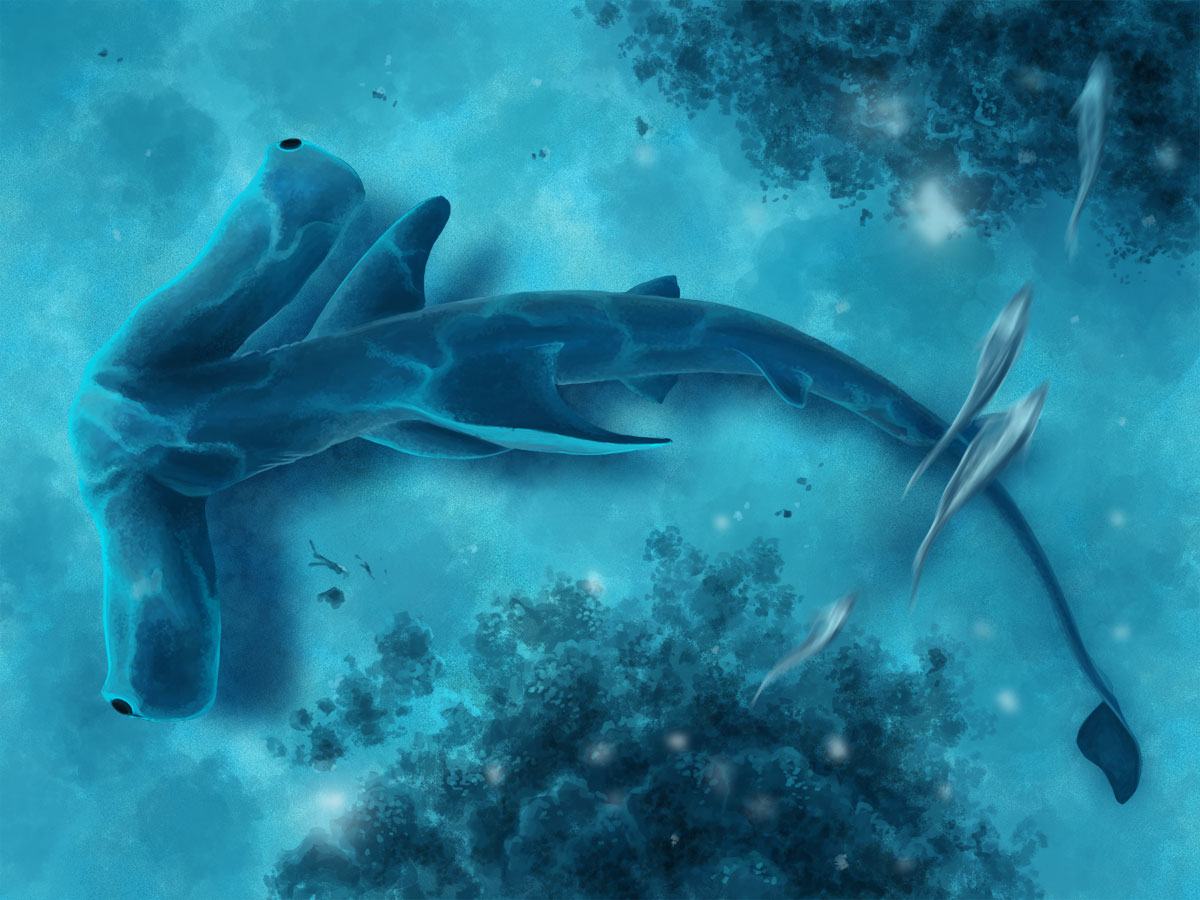 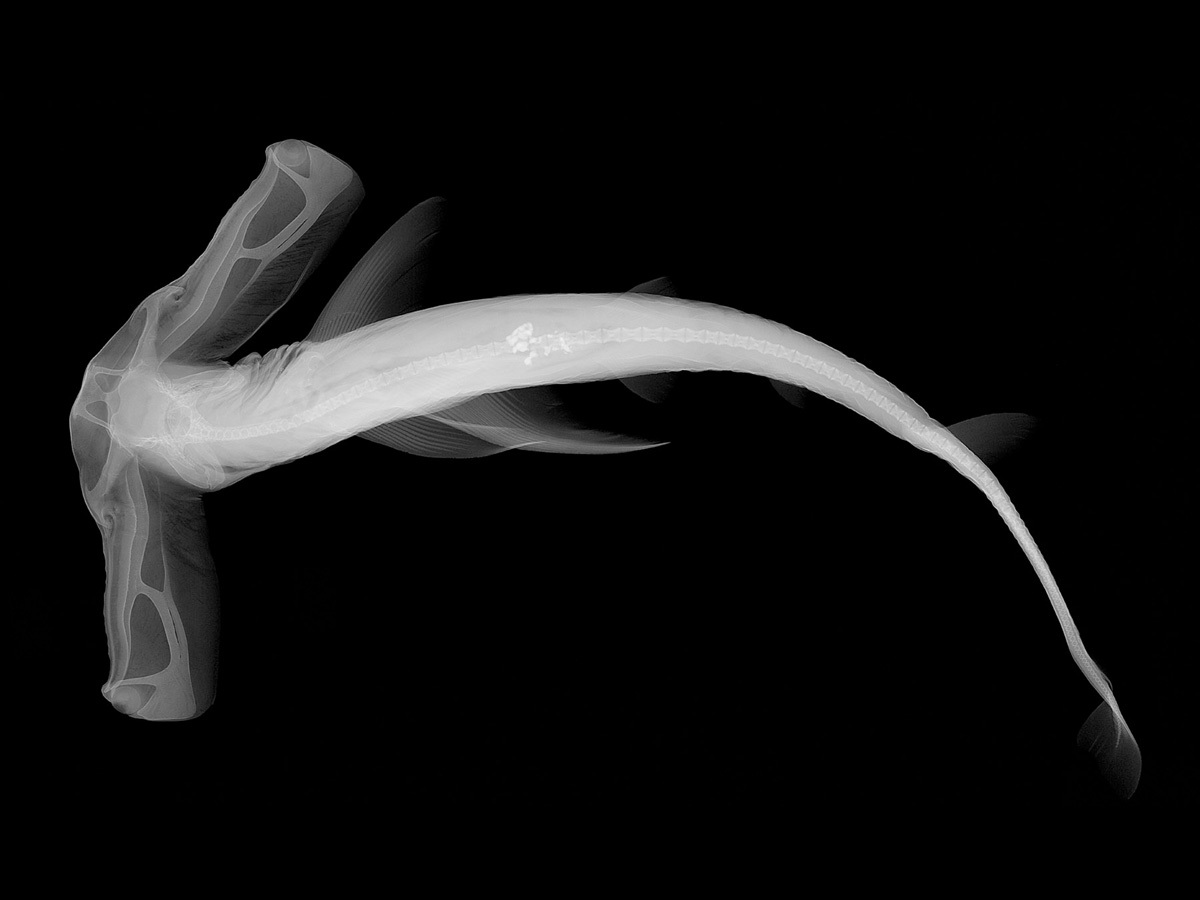 Unlike bigger hammerhead sharks that hunt in open waters, some smaller species tend to live near the coastlines. The 1.5-meter (5ft) long winghead shark, for example, hunts in shallow coastal waters of the Indo-West Pacific. Its anatomical namesake, the T-shaped head, is not made of solid bone. Instead, the “basic blueprint” of a shark’s head is simply elongated somewhere along the line of its evolutionary history. The bony flaps containing the eyes at the ends are covered with “Ampullae of Lorenzini,” organs that are found in rays and sharks for scanning electronic fields in order to find sand-covered prey. The winghead shark has taken this to a new level though. The T-shaped head can reach the size of about half the body length suggesting that this shark is a top predator, hungry for small-sized prey. 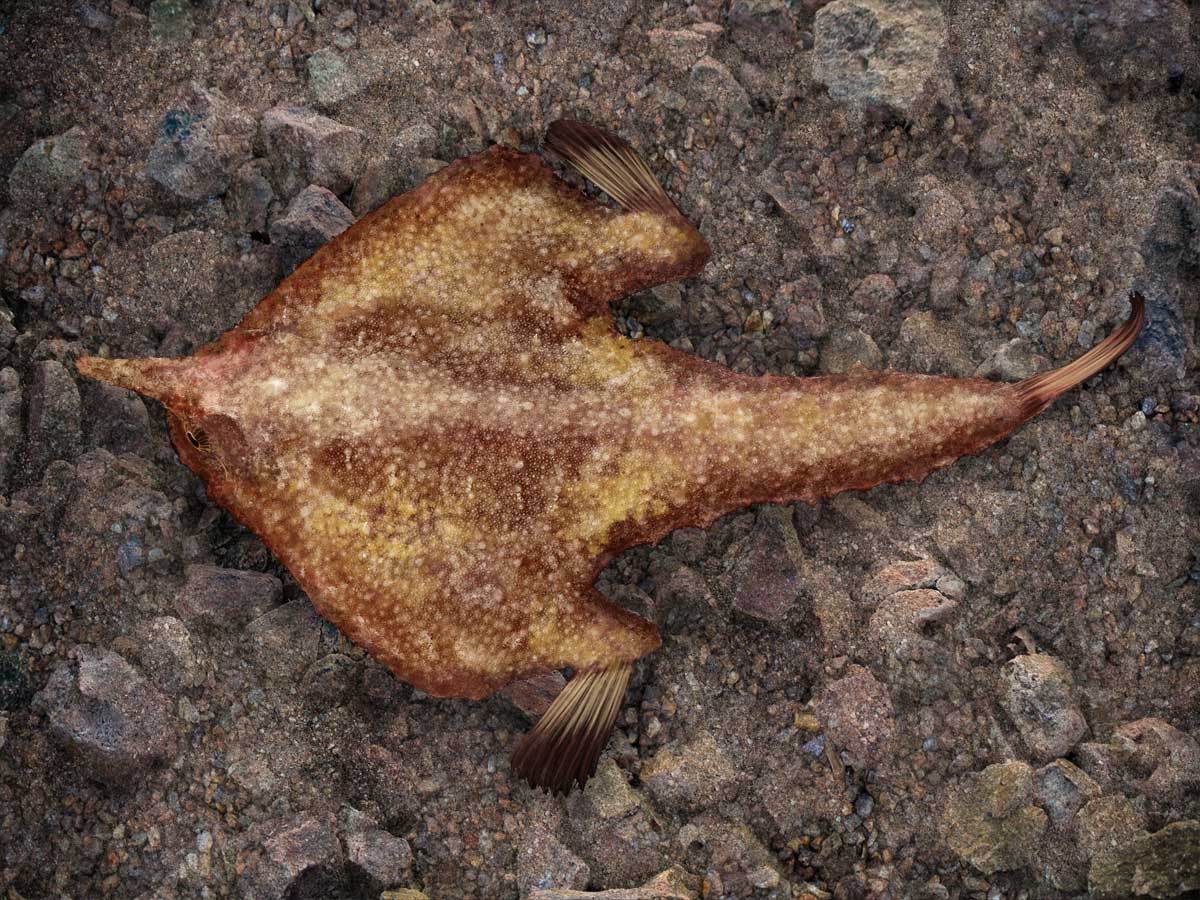 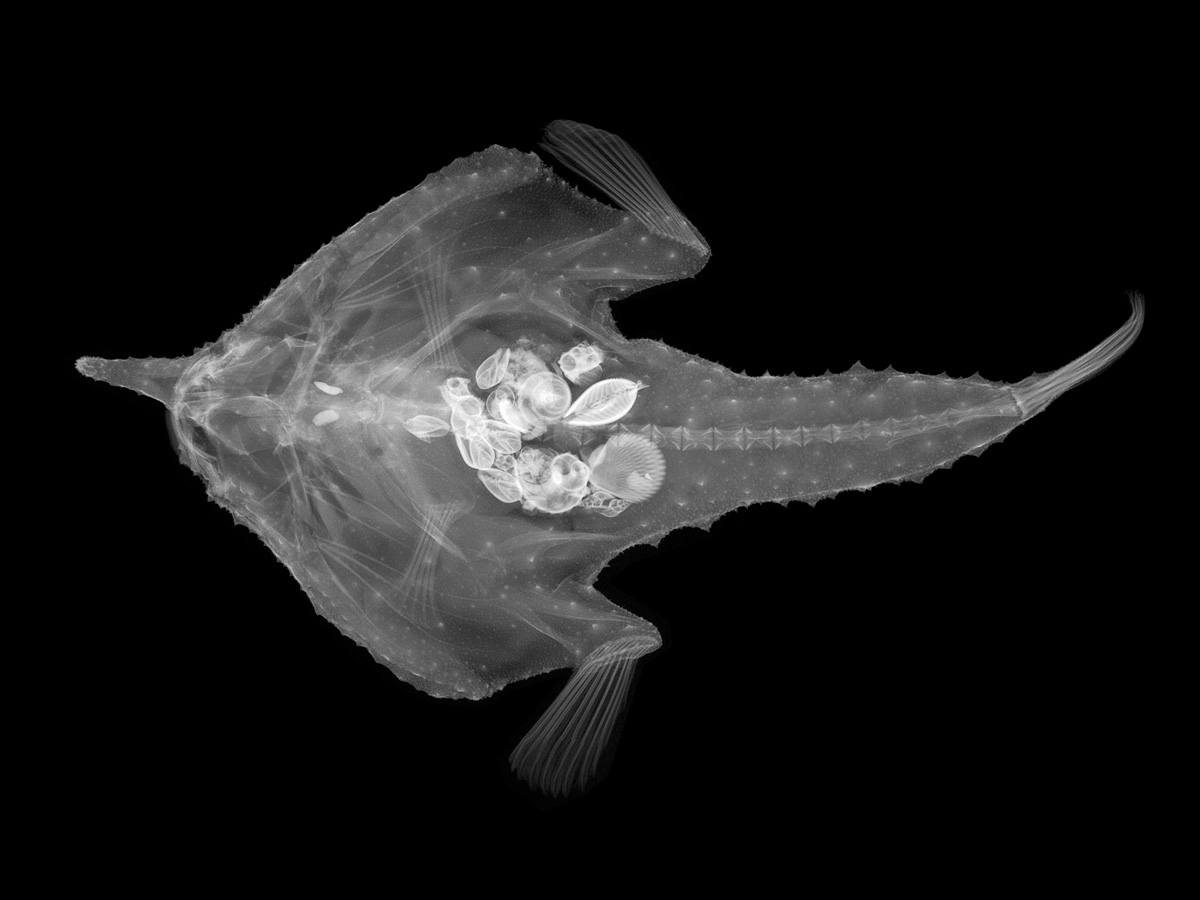 While the seamoth has spine-like fins developed to walk across the sea floor, the flattened batfish developed proper “legs.” In this bottom-dwelling species, the pectoral and pelvic fins have developed into muscular leg-like fins used to shuffle around on the ocean floors of Mexico and the United States. Despite its camouflaged appearance, the lips of these fish are bright red-orange, probably for sexual selection. As seen inside its gut, this particular specimen preferred marine snails. The batfish can also use the protrusion on its head – a modified dorsal fin – to lure small crustaceans as well.

Original X-ray images from Fish Inside Out, by Smithsonian's National Museum of Natural History


Related Stories
Cougars survived Ice Age by eating almost anything
Lungfish and Salamanders show how our hearing evolved
Incredible fossil shows how a fish and a pterosaur died in combat
Atopodentatus and its messed-up face
The two waves of reef fish evolution
//sulc.us/1g6or
/articles/a-bare-bones-look-at-bizarre-fish/