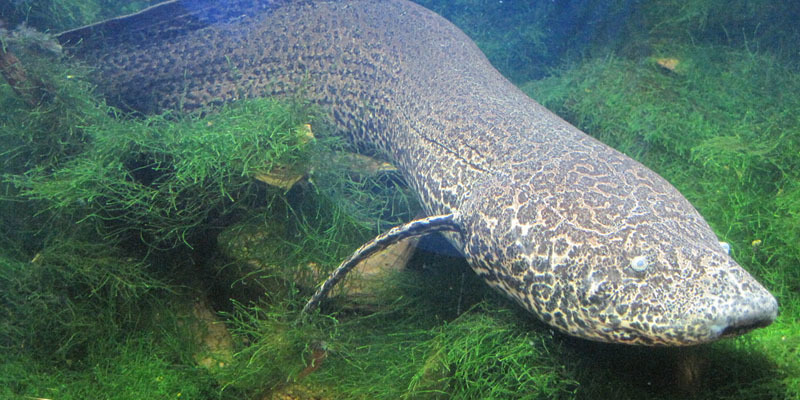 Lungfish and Salamanders show how our hearing evolved

All Posts
Hearing underwater and through air require very different ear structures. Modern lungfish and salamanders can show us how our first land-living ancestors managed the transition 300 million years ago.

In order to hear, our ears need to translate vibrations into nerve signals that are detected by the brain as sound. That depends on what medium these vibrations are been carried through, and the speed in which the sound waves are traveling. That’s why the hearing apparatus of terrestrial and aquatic animals are very different.

In land vertebrates, the translation of vibrations into what we actually perceive as sound is done by a complex hearing system divided into three parts: the outer ear, middle ear and inner ear. Although the specifics change between different animal groups, in general it works the same way for mammals, birds and reptiles.

The outer ear is responsible for funneling the sound waves from the outside world into the middle ear, where either one or three tiny bones transmit the vibrations as rhythmical movements to the inner ear. Inside it there’s a fluid-filled cavity and sensory regions that react to the movements within the fluid and send pulses to be carried by nerves and interpreted by the brain.

However, most fish don’t have the three-part ear of vertebrates. Instead, they have only an inner ear that collects vibrations transmitted directly from the water to their bodies. A simple bone called an otolith and some sensory cells around it are responsible for converting the vibrations into sounds that fish can hear.

That’s possible because the bodies of fish have roughly the same density as the water around them, so the vibrations can travel straight through their tissues into the otolith. Air has a much smaller density than water, so sound waves can’t pass smoothly through their bodies outside of water and therefore they can’t hear airborne sounds very well.

So how did our ancestors that crawled out from the swamps 300 million years ago managed to make that transition from water-based to air-based hearing?

The first definitive evidence of a middle ear in terrestrial vertebrates has been found in fossils of the Triassic period. That’s 100 million years after the first amphibians left the water. For a while, paleontologists thought that during this time most land-living vertebrates were practically deaf, incapable of properly hearing through air. This view has changed after a team of researchers from Denmark analyzed how salamanders and lungfish can hear.

Salamanders are modern amphibians which spend a large portion of their adult lives on land, while lungfish are a group of fish that can breathe air with primitive lungs, crawl out of drying ponds in search of other bodies of water and they even hibernate in underground burrows during droughts. The two serve as approximate models for the creatures that first made the transition. Both of them also only have inner ears, but they aren’t deaf outside the water.

The Danish researchers found something surprising: salamanders and lungfish hear through air with the help of their lungs. By monitoring the brain activity of the animals while sounds of different frequencies were played by speakers both inside and outside of water, they found that the air inside their lungs vibrates along with the soundwaves allowing their brains to translate the vibrations into sound - effectively working as a middle ear.

So the ability to breathe air, possessed by a few fish even today, accidentally ended up being useful for hearing on land. That laid the groundwork for terrestrial vertebrates to gradually evolve the complex system of middle ears from bones of the skull and jaw and eventually inner ears to improve hearing, all while not being totally deaf.

Together with what we know about the evolution of limbs and lungs, this shows that all changes from water to land were part of a long process enabled by the use of structures that previously served a different function, something that in science is called “co-option.” Through co-option, living things can achieve entirely new things using body parts or processes that they already had.


Related Stories
Vandals destroy Europe's largest nest of dino eggs
Bipedal crocodile ancestor discovered in North Carolina
Atopodentatus and its messed-up face
Tiktaalik was a fish out of water
Weird mammals get a home in the tree of life
//sulc.us/rrvbb
/articles/researchers-reveal-how-hearing-evolved/