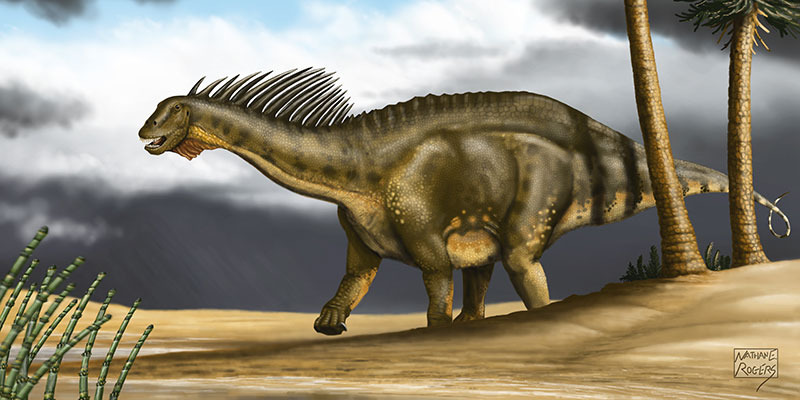 The punk rock dinosaur from Patagonia

All Posts
Amargasaurus is the weirdest of the long-necked dinosaurs, and among the strangest of all dinosaurs. It had high rows of spines that projected from the top of its neck and back, the equivalent of a dino mohawk. Its bony mane would make the band members of The Misfits melt with jealousy.

Forked parallel rows of spines ran down the entire neck and foremost back of Amargasaurus. Some spines reach almost two feet long near the center of the neck. At the rear of the dinosaur’s back the spines form odd paddles rather than forking into two rows.

No one knows definitively how Amargasaurus used its unusual spines. Scientists have proposed that the spines formed sails that either allowed the dinosaur to regulate its body temperature or were used for display. At least one eminent paleontologist has dismissed this suggestion and others have suggested the spines could have been used for defense or mating display purposes.

For a sauropod, or long-necked dinosaur, Amargasaurus was unusually short and small. It was only about eight feet tall, 30 feet long, weighed four tons and had a short neck. By comparison, Brachiosaurus stood 30 feet tall, more than three times the height of Amargasaurus. Diplodocus was 16 feet tall at the hips and 90 feet long. Like all other sauropods, it was a plant eater.

Paleontologists José Bonaparte and Leonardo Salgado found Amargasaurus in 1991 and named it after nearby La Amarga Creek in Argentina. It lived during the Cretaceous Period some 130-122 million years ago.

A fully mounted Amargasaurus skeleton is on display at the Museum Victoria in Melbourne, Australia.


Related Stories
Dwarf dinosaurs died out amid blitzkrieg of carnivores
Dinosaurs of the South Pole
Sickle-clawed dinosaur gets a fresh look
Grandfather of Brontosaurus found in South Africa
Triceratops and its toothy bite
//sulc.us/1kjr4
/articles/the-punk-rock-dinosaur-from-patagonia/