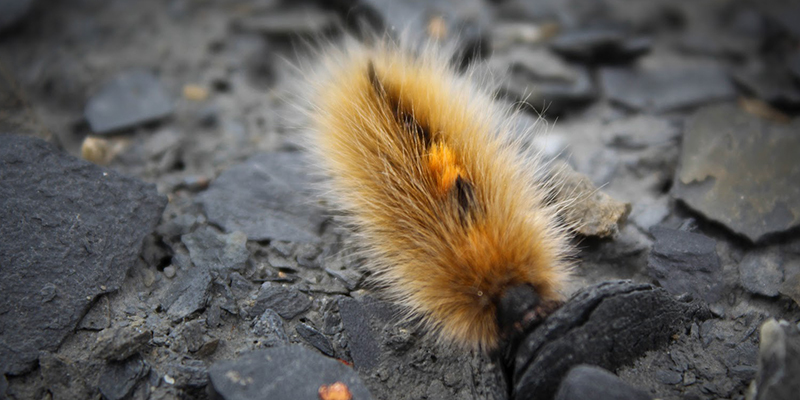 The oldest caterpillar on Earth spends its winters frozen solid

All Posts
With a name as pretty as Gynaephora groenlandica, you’d imagine this moth to be a frail creature with no defenses at all. But it is one of the hardiest insects in the world, surviving the Arctic winter frozen and still alive as a caterpillar. The Arctic woolly bear is a true survivor in every sense of the word and has even wormed its way into our culture.

Woolly bear festivals are not held in reverence to bears. In fact, they are not even celebrated for any mammals in particular. These events, the largest being held in Ohio, are to celebrate the caterpillars of a certain type of moth. The festival in Ohio is held at Vermillion on Lake Erie.

Since 1973, people have celebrated the mythical connection of this caterpillar with the winter. These festivals consist of marching bands, parades, games, costumes and even a caterpillar race in which individual woolly bears are pitted against one another in an event of speed and endurance. It is similar to Groundhog Day, just not as well known to the general public.

The real woolly bear is the caterpillar of many common and sometimes dull species of moth and as you sense by the name it is covered in thick spines which make it look soft and hairy. Many caterpillar hairs are venomous or cause irritation when touched but not this one’s. Although people with sensitive skin can get dermatitis from picking them up. The real defense of many of these animals is to roll up into a tight ball, thus protecting the larva’s delicate head from predators. 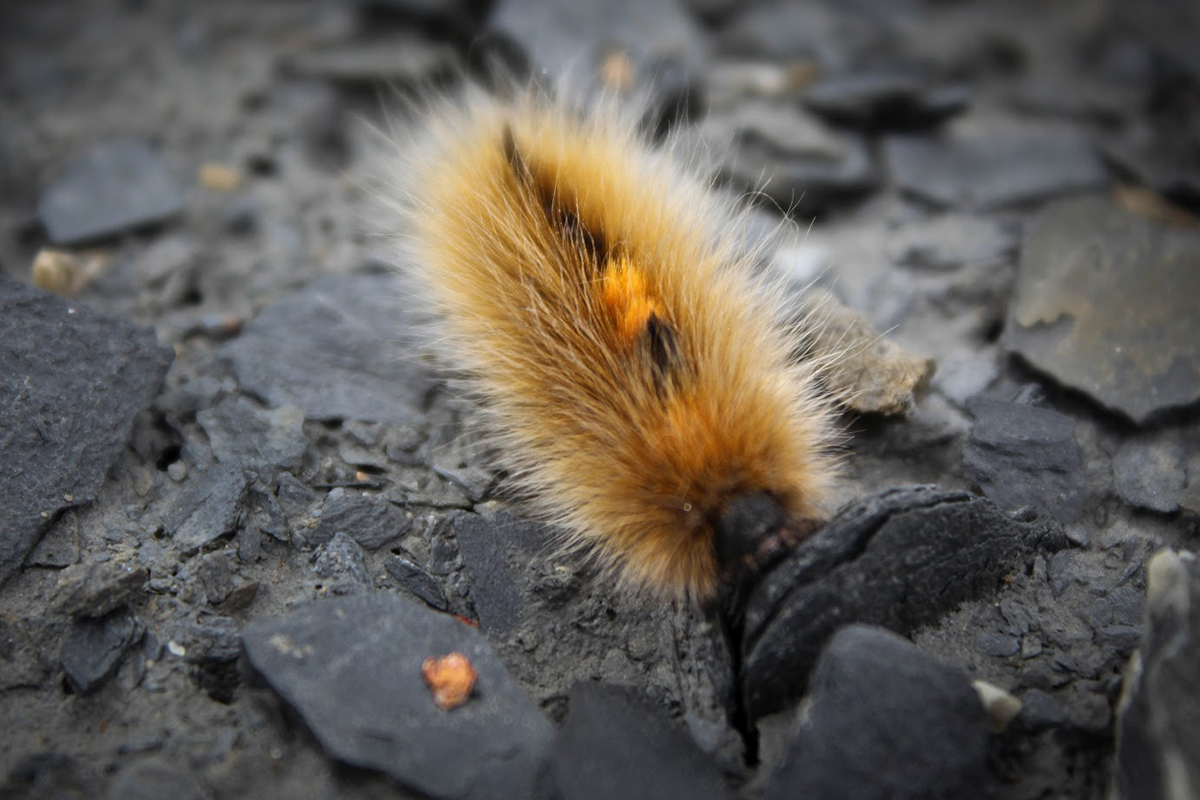 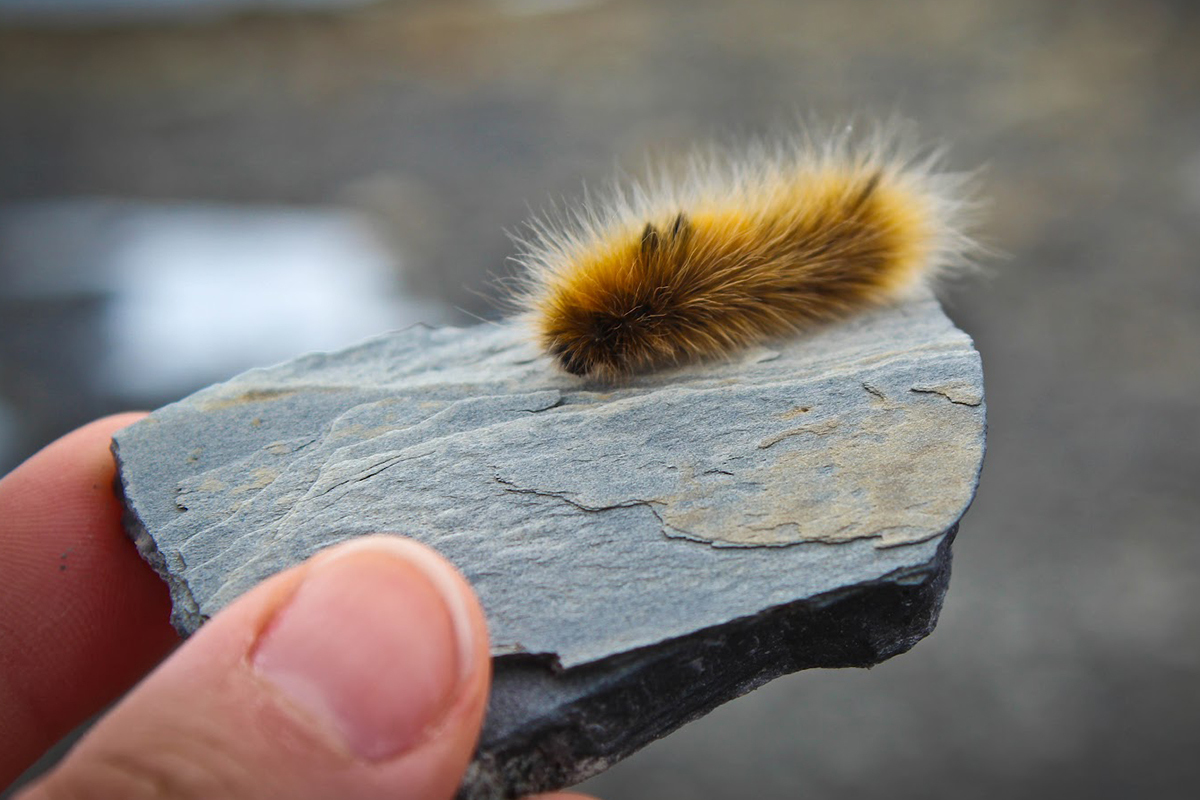 Caterpillar versus photographer
Comparison between a fingernail and an Arctic woolly bear caterpillar.
Kristy Doyle

One species in particular, the Arctic woolly bear is unique for being an incredible survivor because it has to contend with some of the harshest conditions on the planet. In many ways though, there is not much difference between what they do and what other caterpillars do. When the eggs hatch, the larvae feed constantly just like any other caterpillar. But this one needs to spend a long time feeding due to the climate in which it lives.

The Arctic woolly bear moth’s range extends to the Arctic Circle, in Canada and even Greenland. In such conditions, a caterpillar has to overwinter in its larval form. This far north, the shortages in vegetation mean that food does not come easily and so the woolly bear has to spend a long time frozen. While covered in ice and frost, the little creatures must depend on a cryoprotectant, or antifreeze in order to stay alive. These cryoprotectants are based on sugars in their bodies, which in turn protect their delicate tissues from temperatures that ordinarily plummet below zero. Some have been found surviving through temperatures 70 degrees below freezing.

Many cold-blooded animals have an antifreeze chemical or chemicals in their blood. For example many fish and frogs that live in colder climates will also allow themselves to be frozen. Once thawed out they will resume activity once more. The Arctic woolly bear moth caterpillars are no different.

They do take their adaptations a few steps further though. They may live through as much as seven winters in harsher climates. Here, the summers are so short and their food demand is so high that even a full day spent eating is not enough to sate the larva’s immense appetite. Only 5% of their lives are spent eating their favorite food, the tiny Arctic willow.

The larvae even use a special type of cocoon called a hibernacula to shield themselves. These cocoons also help to protect the caterpillars from parasitoids, although some parasitic ichneumon wasps and flies still manage get their victims. More than 90% of their life is spent in the hibernacula, while much of the feeding occurs in June. Come spring though, wherever they live, some woolly bears will become adult moths.

The Arctic woolly bear moth is not the most conspicuous or even the most well-known of all lepidopterans. It is certainly not the most attractive insect, coming in shades of grey with rather complex black patterns. The upper wings are much darker than the under wings. As adults, the moths have just a few days to find a mate and reproduce, after which they die. They lack mouthparts and are unable to feed, just like many other species of moth. So you wouldn’t find this moth pollinating any flowers or drinking nectar any day soon.

The moth’s life though is far from sorrowful. The imago, or adult form, has only one purpose and that is to mate and reproduce, leaving another generation of caterpillars to survive through the winter as little insectoid popsicles buried under frozen soil.

Photos by Kristy Doyle. Check out her blog, north of sixty.