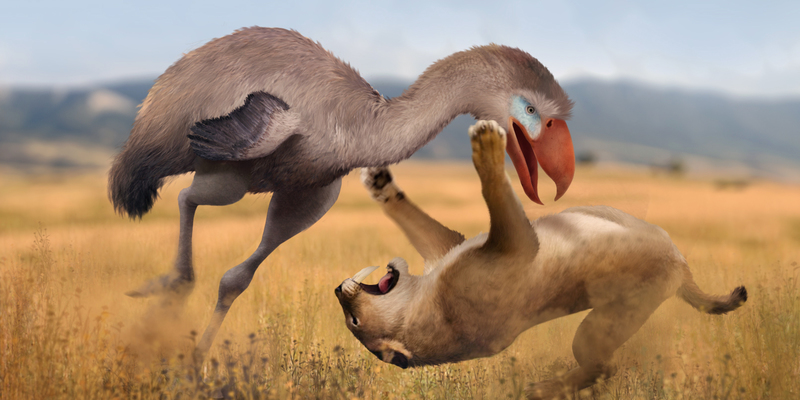 The menacing reign of the terror birds

All Posts
Racing across the plains of Argentina were strange feathery shapes, taller than a man. They pecked their prey to death with hooked beaks mounted on heads as big as that of a horse’s. These were the terror birds, the dominant predators of their day and age.

They were the only line of carnivorous flightless birds ever, and they embodied the power and ferocity of their predatory dinosaur relatives before them. Called phorusrhacids, these birds dominated South America, ruling over a fauna made up of primitive mammalian herbivores and rather small carnivorous mammals. These creatures are known in popular culture as the terror birds, a name that is well deserved.

Throughout prehistory, there have been numerous bird lineages that took over the role of flightless herbivores. The modern ratites such as the emu, ostrich and cassowary are just one line, and many families of waterfowl managed to do quite well as powerful terrestrial browsers in many parts of the world. The terror birds are related to the modern seriema, a relative of parrots, falcons and passerines. All these birds are now known to be closer to one another than others according to recent genetic evidence.

Today’s seriemas are flying birds in the group Cariamiformes. They stroll across the grasslands of South America, searching intently for small animals scurrying for cover in the undergrowth, and so spend more time on the ground than in the air. They kill their prey by picking them up and throwing them down, after which the victim is picked apart by the bird’s slightly hooked beak. The far larger terror birds might have done something similar. 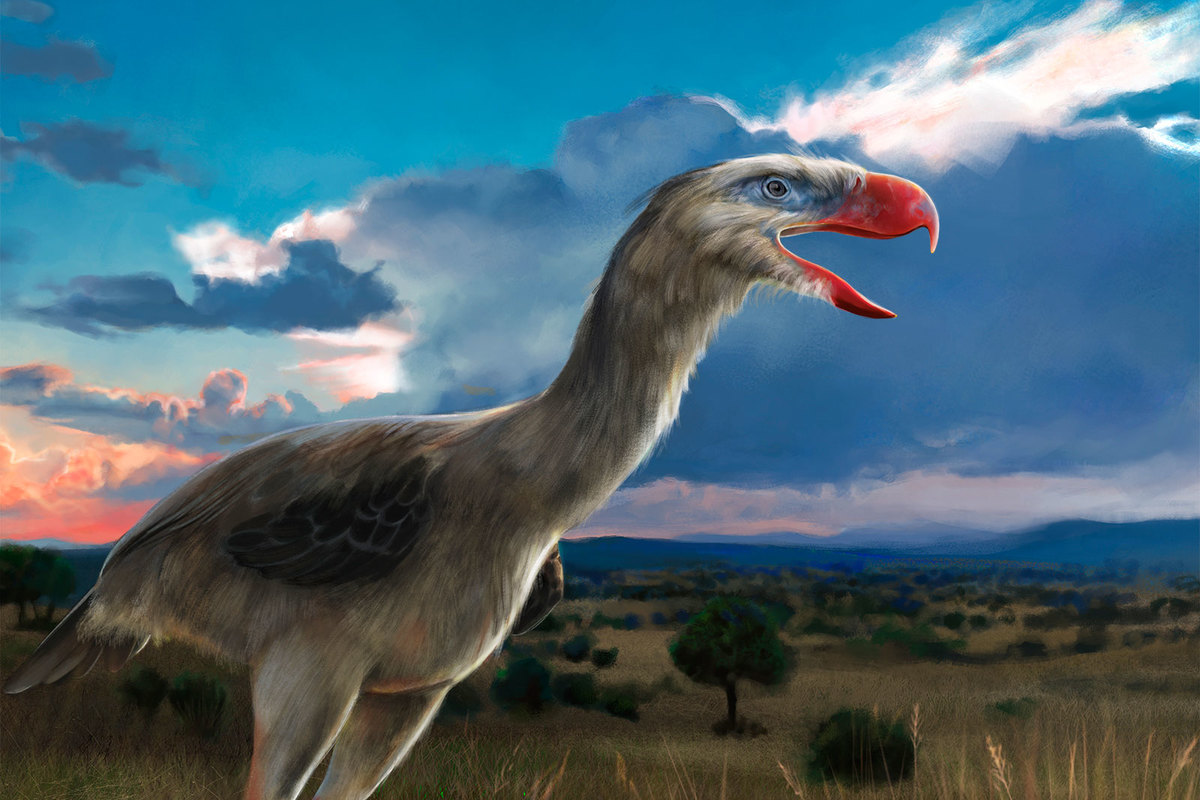 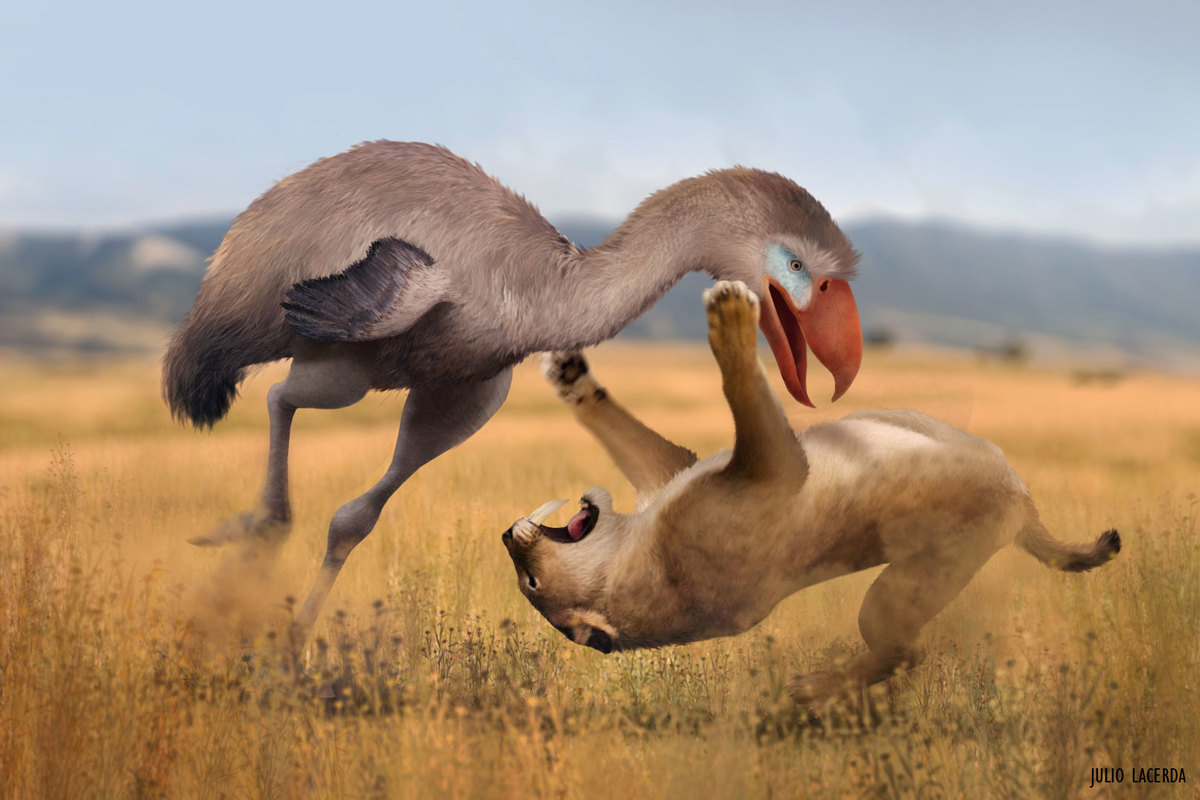 Many modes of predation have been ascribed to them, based on studies of the medium-sized Mesembriornis, one of the most well-studied members of the group. Mesembriornis dates back to the Pliocene, and is one of the last of the terror birds in South America. It is thought to have been either a cheetah-like runner or a kickboxer, using its massive talons to render its prey helpless.

We also know that these creatures, while tall and speedy, did not have powerful skulls. Their beaks and heads were narrow, but were able to withstand a great deal of force. The necks of these birds were made for repeated striking attacks, with the muscles being strong enough to drive the hooked point of the beak into a smaller victim’s body to kill it. Due to their light bodies, they may have taken prey smaller than themselves. They might also have hunted like seriemas themselves, grabbing prey in their beaks and shaking them to death.

The phorusrhacids were first discovered by famed Argentinian paleontologist Florentino Ameghino. The first-known genus was named Phorusrhacos longissimus. For a while the remains of these giant birds were assumed to be those of herbivorous mammals due to their massive size. While this genus has been widely publicized, being the archetype terror bird, not much is actually known about the animal proper. Instead we do know that it was a large running predator with a massive, hooked beak and that it lived in the Middle Miocene in the Santa Cruz Province of Argentina.

Some of the smallest of the South American terror birds date back to the Early and Middle Miocene, and superficially resemble their modern relatives. On the other end of the spectrum are the gigantic Kelenken and Devincenzia. These birds were over three meters in length and somewhere between two and three meters in height.

The native herbivores of the Argentine grasslands are unrelated to any living hoofed animals, otherwise known as ungulates. There were the notoungulates and litopterns, two distinct groups that superficially mimicked other ungulates. Among the former were massively-built heavyweights the size of hippos and rhinos. The latter especially were mostly running animals that resembled small ponies or at the other extreme, llamas. Some like even managed to lose their toes, growing a single hoof for better running capabilities.

Carnivorous mammals were restricted to a small group called sparassodonts. These were related to marsupials, and were relegated to mostly weasel-like to jackal-like roles for a long time.  A few though, began to grow to wolf-size in areas where the birds did not exist. Towards the Pliocene Epoch however, we have a few larger individuals like Thylacosmilus. This animal was as big as a jaguar and had immense saber teeth for killing large prey.

Argentina’s skies were also home to the gargantuan Argentavis magnificens about 6 million years ago. This was an eagle-like bird about two meters tall on the ground. It had a titanic seven-meter wingspan. It was the most massive flying bird ever to exist. Its family, the teratorns, actually lasted longer than the terror birds. These teratorns managed to migrate to North America, where they lived until about 10,000 years ago. Argentavis was remarkably similar to terror birds in terms of habits. It did not capture its prey in its talons but instead strode across the ground, swallowing its victims whole thanks to its immense gape.

The teratorn migration was part of the American Interchange of the Pliocene. This event occurred due to volcanic activity lifting up portions of seabed between the then-island continent of South America, and North America. This created the Isthmus of Panama, and animals could cross over this new land bridge. The Interchange happened both ways. Many of the most iconic South American mammals today, like llamas, jaguars and tapirs are not native to the continent. Instead they all had their origins in North America.

These replaced many of the more primitive South American animals within a few million years. Even mastodons, relatives of elephants, managed to cross over to the south. These soon dwarfed the former giants of the continent, the rhinoceros-sized giant ground sloths. South America’s top carnivores at this point were the big cats like pumas and jaguars, as well as 880-pound sabertooth Smilodon populator.

The South American terror birds were not exactly driven to extinction by this event. They were wiped out somewhat before this, and the predatory marsupial relatives went with them in the Pliocene. The varied reptilian predators were gone roughly four million years earlier.

Very few South American natives actually managed to be successful in the north. The largest of these migrants were the herbivorous ground sloths, as well as the gigantic glyptodonts and pampatheres, relatives of today’s armadillos. These creatures had a much lower turnover of energy than mammoths, horses or bison, and so were able to survive in drier, more deserted areas than their contemporaries or seek narrower niches.

The terror birds did not do as well though. One, named Titanis managed to make it up to Florida of about 2 million years ago, but died out due to added competition with big cats and dogs. Titanis in particular is one of the best-known of the terror birds. It was, at one point, thought to have two clawed digits on its hands but this has now been disproven. This was a heavily-built creature of around two meters tall, one of the larger members of its kind. Humans never saw this magnificent bird, instead living alongside the massive flying teratorns which would soon be part of legend and folk memory as the mythical Thunderbirds.


Related Stories
The giant sloths that lived in the sea
Weird mammals get a home in the tree of life
The biggest rodents in the world used their teeth as tusks
The crocodilian rulers of pre-Amazonian Peru
Deer-like male combat behaviors in mammal relatives 270 million years ago
//sulc.us/yknfh
/articles/the-menacing-reign-of-the-terror-birds/