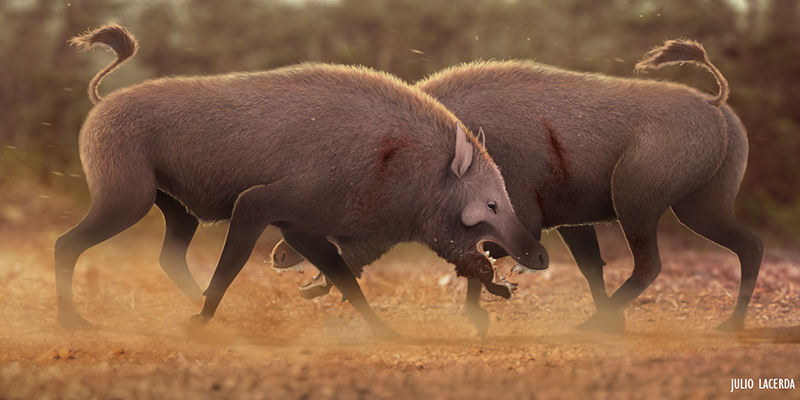 Terminator pigs: Rise of the entelodonts

All Posts
There were once hoofed animals that did not just graze and run in herds. Among their ranks were gigantic beasts with bone-crushing jaws that were the most powerful predators of their time. They ruled the earliest grasslands, taking prey up to the size of rhinos while contending with other deadly hunters. They are the entelodonts, the aptly named ‘terminator pigs’.

An entelodont is not a true pig. They get their common name from the fact that the two groups shared many similarities but were also incredibly different. While pigs and entelodonts are both ungulates they are only very distantly related. The entelodonts are related to a larger group that also contains hippos, whales and their closest relatives. This group is known as the whippomorphs, and the entelodonts lie just outside this much bigger group. Today, whales are the only ungulates that prey on other animals, be it krill, fish or other whales. Hippos will take to scavenging like pigs. And millions of years ago there were the entelodonts. Still, the common name managed to stick and it is very common to call them terminator pigs.

Entelodonts were all very large animals, and are now famous for looking somewhat like an oversized warthog or wild boar. In terms of their bodies, the entelodonts had the standard physiques of other hoofed animals. Their legs were short and slender but strong, built for endurance rather than speed. They had high and muscular shoulders to support massive heads studded with crushing molars and very large canines and incisors. Their feet were still tipped with cloven hooves like those of a pig. This creates an image of a rather tank-like animal that could easily throw its weight around to intimidate smaller predators. It could even ram small prey items to prevent them from escaping.

Their most distinguishing feature of the entelodont is its number of flanges and bony lumps on their faces. Earlier representations would play up this monstrous profile greatly, showing lipless creatures with their skull flanges protruding grossly out the sides of their faces. These days they are restored with a full set of lips and wet noses, with the flanges supporting very large and powerful jaw muscles. Thus they have now been given full cheeks and lips, much more reminiscent of regular mammals. 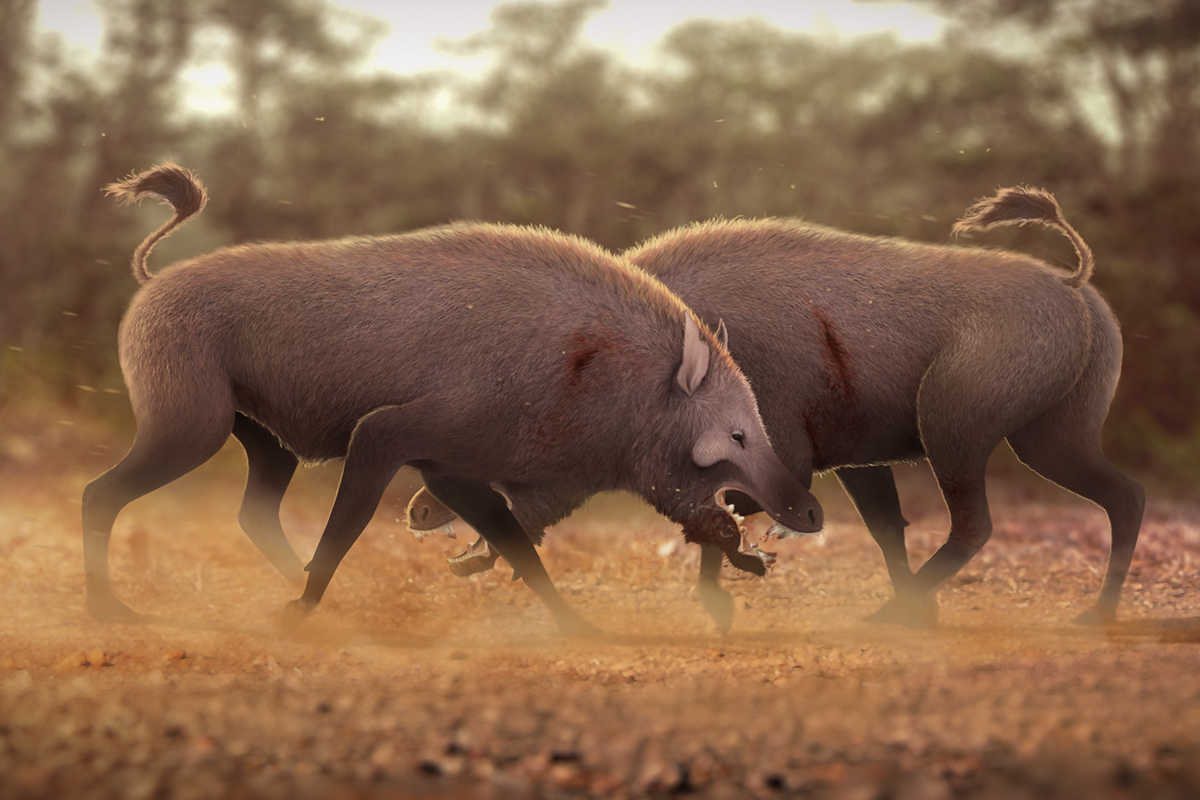 Dueling terminator pigs
A pair of Archaeotherium fight one another over territory, each drawing deep bleeding wounds in the other as they scuffle.
Julio Lacerda

The entelodont family was named in 1883 by the famous Richard Lydekker. Many types had been discovered and named even before this. Even the great legends of paleontology like Edward Drinker Cope and Joseph Leidy had discovered and named a few of these creatures. Often they were known from fossil teeth and jaws. We have other, more tantalizing clues in the fossil record too. Some fossil sites in the western United States show actual evidence of an entelodont on the hunt. The entelodont genus in question is Archaeotherium. It was an animal the size of a cow, and dominated this area roughly 33 million years ago.

Archaeotherium is one of the best-known entelodonts and the one that has been studied most often. It was the largest predator of the White River fauna. This fauna existed from the Late Eocene to the Late Oligocene, a time when the rainforests that covered the Western Hemisphere were beginning to die out. They were replaced by a mixed vegetation of plains mixed with dry woodlands and smaller forests.

The White River fauna is diverse and long-enduring, having existed for millions of years. It was thus constantly changing as the landscape became more open and mammals took up to a running lifestyle after the thick jungles began to shrink back. Many of these early runners were smaller than their current descendants. These include the first grazing horses, tiny early camels and a family of sheep-like animals called oreodonts. The latter group were the commonest Oligocene animals in North America. They were early relatives of today’s ruminants like cattle, sheep and goats.

One of the best places to find Oligocene White River fossils is Badlands National Park in South Dakota. Fossils of several grazing and browsing mammals have been found with the bite marks of Archaeotherium on them. Whether they are hunted or scavenged is questionable but we can see that this terminator pig was certainly consuming other animals on quite a regular basis. These marks have been found on almost everything here, from creatures as small as primitive horses and camels to the large hornless rhinos of the area.

Fossilized footprints in Toadstool Geologic Park record an Archaeotherium that had been actively stalking a hornless rhino called Subhyracodon. However, even the rhino had been defenseless against the bone-crushing bite of the entelodont. The footprints show that the Archaeotherium had been ambushing the rhino in a wet, swampy area. When the time came, the pursuer attacked and the rhino changed direction with the monstrous entelodont hot on its heels. Archaeotherium and other entelodonts did not rely on advanced brainpower. Despite their huge heads, their brains were no larger than an orange. None of the herbivores had very large brains either, and the predators themselves were those that hunted by ambush.

The entelodonts managed to survive the changing world of the Oligocene. The continent became much drier and cooler and the forests began to shrink even further as the Miocene set in. Grasslands began to spread with the spread of ruminants, or the mammals that chew cud. The oreodonts, early representatives of this group, were replaced by more well-adapted creatures. The Miocene is widely considered as the heyday of the mammals, lasting from 25 to 5 million years ago. Many mammal families were taking on their modern forms, with larger sizes in early horses and camels, and relatives of deer, giraffes and pronghorn being among the newer arrivals. Three-meter tall chalicotheres and running rhinos were the largest herbivores here. Still the last of the entelodonts persisted with incredible stubbornness, becoming one of the largest predatory land mammals in history.

Its name was Daeodon, and once again this beast was the ruler of western North America. This gigantic animal was close to 1.8 meters tall, as big as a bison. It was similar to other entelodonts except that it was obviously far more powerful given its huge size. There were still plenty of differences from Archaeotherium. For one, its cheek flanges were much smaller and blunter than those of its relatives. The fossils of this animal were first found in the John Day Fossil Beds in Oregon, while a spectacular complete skeleton was found in Agate Springs Quarry in Nebraska. Daeodon’s fossils are around 20 million old. These sites and the majority of Early Miocene North American formations preserve a world where the old system was dying out and a new fauna was beginning to dominate the continent. Daeodon was the last part of this older order to pull through, coming into existence at the beginning of the period and dying out before its end.

Daeodon was the ruler of this new world for quite some time but its days were still numbered. It was still the small-brained ambush predator that all entelodonts were and large size could not help it in this department. Some of the most common of these new carnivores were the bear-dogs. They were Eurasian migrants that used the Bering Land Bridge between North America and Russia to cross over to the new world. These were a large group of predators related to the ancestors of perhaps both bears and dogs.

The smaller ones like Cynelos were somewhat like wolves in their habits. The largest, like the savage Amphicyon were almost like fast-running bears. Bear-dogs dominated the Northern Hemisphere for millions of years, from the earliest Oligocene to the end of the Miocene. They had the flexible backs of cats and they hunted by ambush. Despite their size they were still not as huge as Daeodon. Where they lacked in bulk, they more than made up for it in terms of intelligence. Amphicyon was as big as any modern bear and so its smaller size would have granted it greater speed over its rival entelodonts. Under such pressure, the old order waned fast and the last of the entelodonts found itself outcompeted by these fast, fierce predators.

For a while, this was what North America’s wildlife was like. Huge doglike predators roamed far and wide while the herbivores around them kept evolving, becoming more and more like their modern counterparts. The likes of Daeodon though, would never come back. While the entelodonts lasted they were the most terrifying and powerful predators of the evolving landscapes in the Northern Hemisphere. All that remains of them today are their fossilized bones, and mathematical estimations of their raw power.