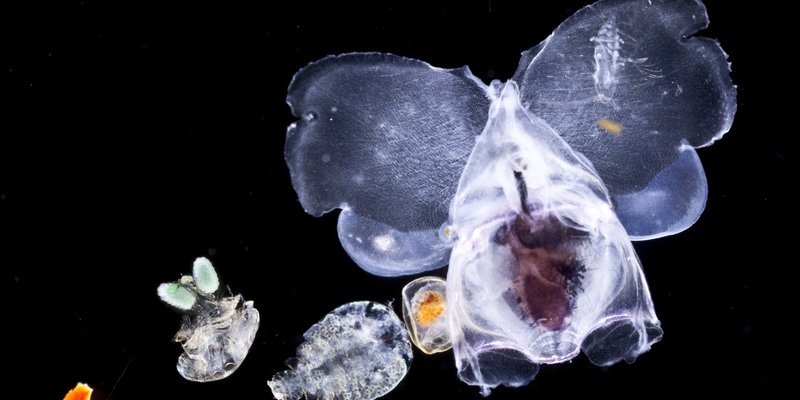 Sea butterflies, the “flying” snails of the sea

All Posts
A pelagic lifestyle is rarely found in marine gastropods, but the sea butterflies have evolved to swim in open ocean. These highly specialized snails play a big part in understanding the acidification of Earth’s oceans.

The pteropods are a group of gastropods somewhat related to nudibranchs. The name “Pteropoda” comes from “wing-footed” and already gives us a clue on the biology of these snails. The sea butterflies (Thecosomata) are just one of the two groups making up the pteropods, the other group being the sea angels (Gymnosomata). The two groups are classified based on their biology and body structures. While thecosomes have fragile shells, their naked counterparts have completely lost their shell.

Sea butterflies are highly specialized for their pelagic lifestyle, the way they move through the water and catch their prey are both directly linked to their free-living habits. While most thecosomes still have a curled shell (like you would see in most snails), there have been reports of individuals having “straightened-out” shells. The Orthoconcha is a group of sea butterflies with such straight shells, it is thought the symmetrical shells correlate directly to their planktonic lifestyle.

The “flying” snails have developed modified flaps on their foot called parapodia that they use to actively swim through the water and escape from predatory sea angels. The way these snails swim resembles the flight of small insects. They appear to make a figure-eight pattern in their swimming cycle, just like flies. This is the first time this way of “flight” is found in another group of animals, a perfect example of convergent evolution. 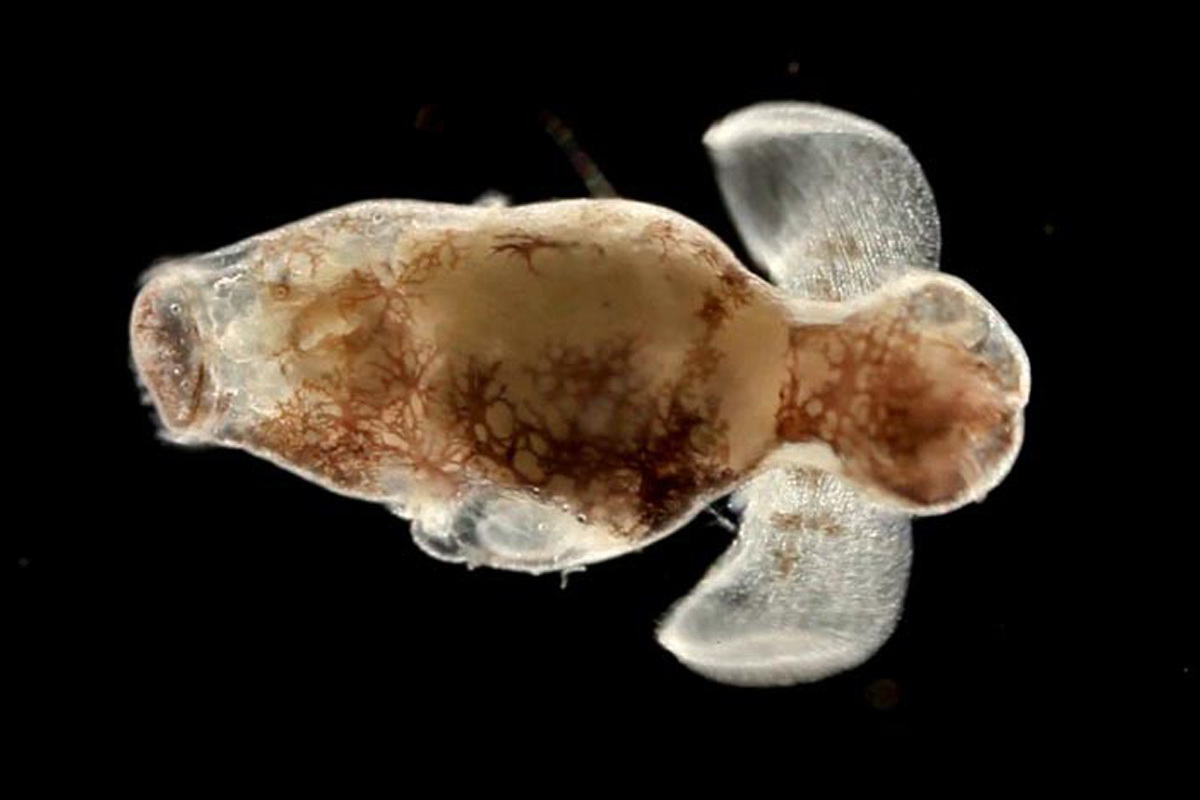 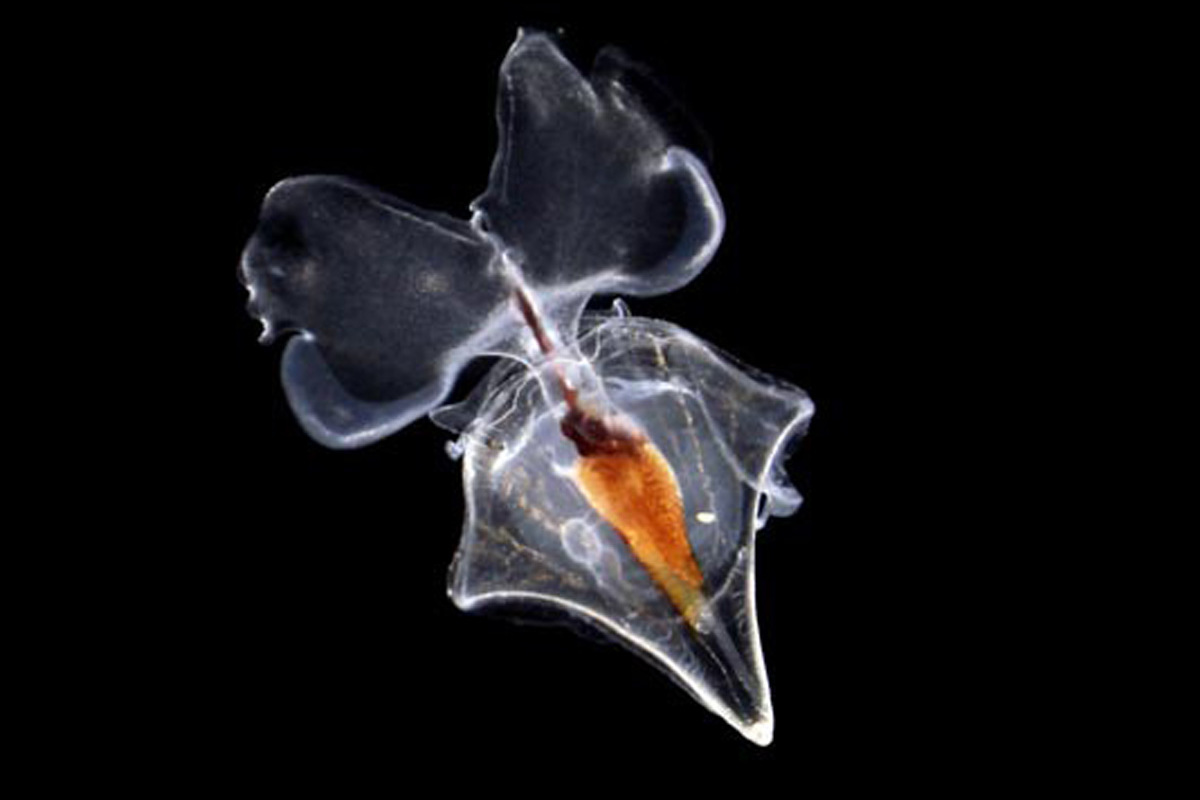 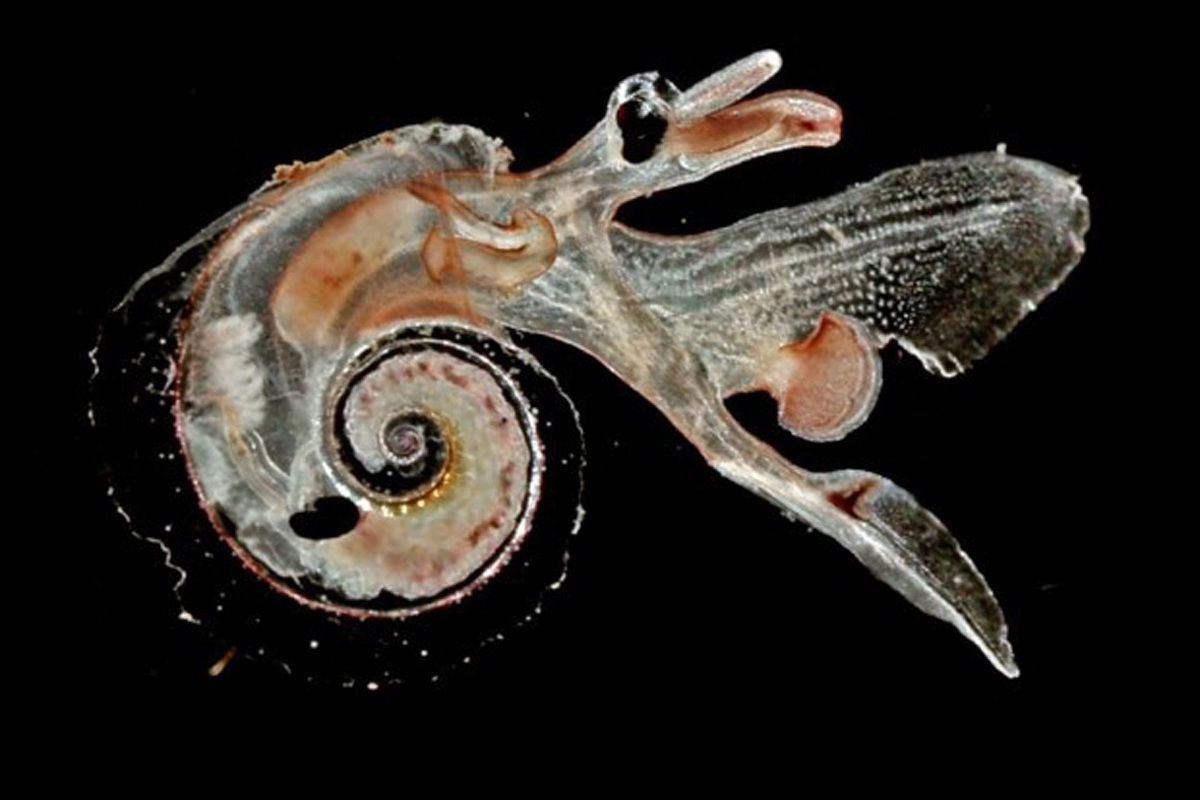 Atlanta peroni
a sea butterfly with the parapodia visible as flaps coming out of the shell
Christian Sardet / planktonchronicles.org

The way the snails catch their prey is interesting as well. Most snails scrape substrate to get their food, and predatory snails often actively hunt for prey. The sea butterflies have developed a net of mucous-webbing for inactively catching microscopic organisms like small crustaceans, but it can also be used to catch sinking particles, so-called “flux feeding.” The snails actively sort out the food they gathered and expel particles they can’t digest.

Sea butterflies have aragonitic shells, meaning they are extremely vulnerable for changes of acidity in the ocean’s water. Human-generated greenhouse gas emissions cause the ocean to absorb more carbon dioxide which consequently increases the ocean’s acidity. Calcium carbonate cannot be bound in acidified water, and for animals like the fragile-shelled sea butterflies, this can be disastrous. If the thecosome populations die out, gymnosomal populations will crash as well. The potential impact of crashing pteropod populations is not yet studied, but since pteropods make up a big part of planktonic ecosystems it is necessary to protect them.

Thecosomes are understudied, but are necessary to understand the human impact on Earth’s oceans. Nevertheless the flying snails are a unique group of molluscs, adapted to a lifestyle that might be the envy of all other snails on earth.

Werner de Gier is a Biology student, aspiring scientific illustrator and invertebrate-enthousiast from the Netherlands. His writings can be found on his blog.