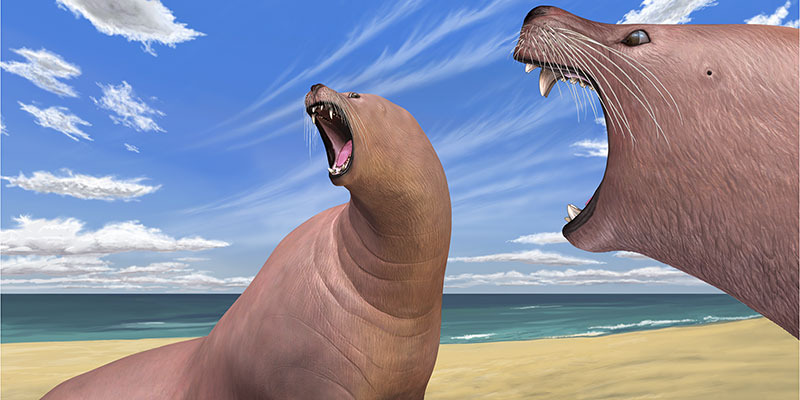 Walruses did not always have tusks: Archaic walrus ancestors were sea-lion look-alikes

All Posts
Scientists have uncovered a 10 million year old walrus fossil in Japan. Despite lacking the tusks that modern walruses are famous for, the fossil is still part of the same family as present-day walruses.

A walrus relative from 10-9.5 million years ago was unearthed in Hokkaido, a region in Northern Japan. The animal, whose species was dubbed Archaeodobenus akamatsui after Dr. Morio Akamatsu, a curator emeritus of the Hokkaido museum, is estimated to have been 2.8-3 metres (about 10 feet) long and weighed 390-473 kgs (850-1050 lbs).

The most obvious feature of Archaeodobenus is its lack of tusks, a defining characteristic of living walruses. In fact the specimen’s upper canines were described as “moderate-sized” and measured only 8.6 cm (3.4 inches) long.

The modern-day walrus tusks that we have all come to know, may actually be a relatively new adaptation. Walrus ancestors may have actually resembled other pinnipeds, aquatic mammals with front and rear flippers, such as seals and sea-lions. The fossil record of the family Odobenidae, the family containing living walruses and their closest ancestors, shows a gradual change from sea-lion looking animals to the striking, long toothed walruses still alive today.

Archaeodobenus is not the only fossil walrus to be found in Hokkaido. One of the authors of this study, Naoki Kohno, published another paper in 2006 describing Pseudotaria muramotoi, another walrus relative found at the same site. Archaeodobenus and Pseudotaria are close relatives to each other, but they are indeed different species. The two species may have split from each other at some point during the late Miocene, 12-10 million years ago. The fact that the two species are from the same family and same geographic range implies that there may have been a rapid diversification of odobenids in the late Miocene.

What could have caused this quick increase in the number of odobenid species? Scientists believe that a rapid change in sea-level in the North Pacific during the late Miocene may have been the cause. A sea-level drop may have isolated two different populations of a common ancestor of Archaeodobenus and Pseudotaria which over time, caused them to evolve into different genera. When sea-level rose again, the two different genera then came back into contact with each other, but at that point, may have already been too different to interbreed.

Today, there is only one living species of the Odobenidae family, the modern walrus, Odobenus rosmarus. In the past, this family was much more diverse with at least 16 genera made up of 20 different species.

This study sheds some light on pinniped evolution. It shows that the diversification of walruses happened quickly and possibly 3-5 million years earlier than previously thought. There were very few archaic species of walrus known before this study, but scientists now believe there could still be more to discover.

Read the original research in >PLOS One.


Related Stories
Terminator pigs: Rise of the entelodonts
Legend of the "Devil's Corkscrews"
The prehistoric beast with the ‘hairstyle’ of a Star Wars queen
Giant hyena versus tusked rhino
Extinct elephant likely sawed, not shoveled with its mouth
//sulc.us/z0f1w
/articles/no-tusks-ancient-walrus-cousin-looked-more-like-a-sea-lion/