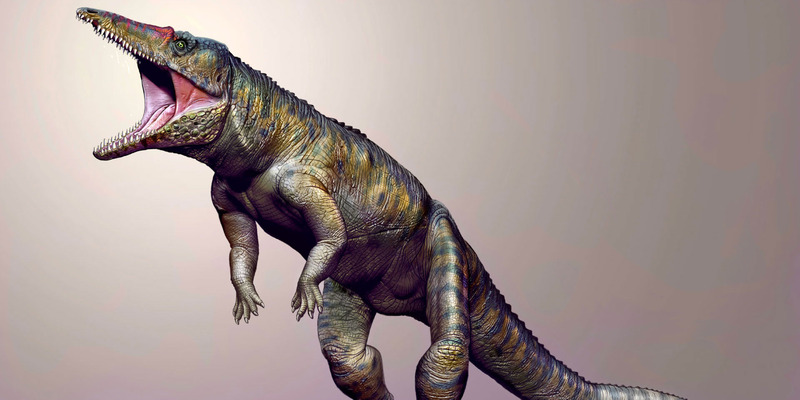 All Posts
In Triassic North Carolina, a 9-foot-tall bipedal crocodile relative ruled the land with a jaw full of knife-like teeth. Meet the "Butcher of Carolina."

Crocodiles are already scary as they waddle side-to-side, running toward their prey with a menacing set of teeth set in a powerful pair of jaws. Now imagine a similar 9-foot-tall animal running toward you, only now lunging at you on a pair of legs. This is the "Butcher of Carolina", or Carnufex carolinensis.

This crocodile relative lived in the Triassic Period some 231 million years ago on the supercontinent Pangaea in what is now North Carolina. Researchers from the North Carolina Museum of Natural Sciences unearthed the skull, spine and arm bones in Chatham County in their home state, already noteworthy for its well-preserved menagerie of fossils.

Among the lush conifers and cycads of Triassic North Carolina lived other similarly freaky predators such as the large crocodile-like phytosaurs and rauisuchids, whose fossils were often mistaken for dinosaurs. Carnufex was not surprisingly a top predator in its ecosystem, while many similar animals around the globe had to compete with early meat-eating dinosaurs called theropods.

No one knows exactly why, but Triassic Pangaea had few herbivores and an overwhelming excess of meat-eating predators. A major extinction event killed off many carnivorous species and opened the door for the proliferation of the theropod dinosaurs like the "speedy plunderer" Velociraptor and the king of them all, Tyrannosaurus rex.