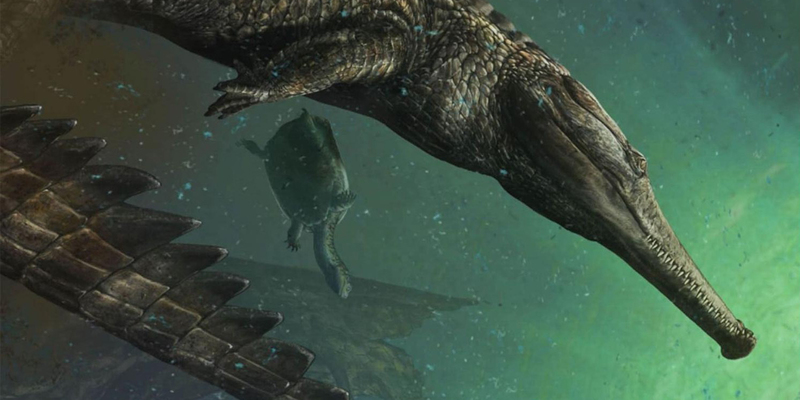 All Posts
Around 120 million years ago, there lived a monstrous marine crocodile relative named Machimosaurus rex. Its massive jaws could crush turtle shells and it terrorized the warm seas that covered what are now the deserts of Tunisia.

The massive oceanic stem-crocodile named Machimosaurus, found in England, Germany and France during the 19th Century is already a rather well-known animal. It was a member of a specialized group called the teleosaurids, mostly fish-eating croc cousins that dominated the Jurassic Period. Machimosaurus too existed in the Jurassic although it did what the others didn’t. It crossed over to the Cretaceous with relative ease, continuing to rule the seas as it had for millions of years before.

During its final days it roamed the shallow seas not of Europe, but North Africa, and it was larger and heavier than any of the earlier species. Known from a complete skull and some rib, neck and shoulder elements, the beast stretched 9.66 meters in length. This also makes it the biggest marine crocodile ever. Remains of this new species were dug up from rocks dating back to the Early Cretaceous, roughly 120 million years ago. It was described scientifically by a team comprising of Frederico Fanti of the University of Bologna in Italy, Andrea Cau, members of the National Geographic Society and other colleagues.

It was published as Machimosaurus rex in the journal Cretaceous Research. Just like its relatives, the evocatively named M. rex was a generalized predator that took on almost anything that it wanted. It was probably eating turtles, fish, squid, other marine reptiles of the time and even land animals that strayed too near the shallows. Machimosaurus’ survival also raises a few questions about the transition from the Jurassic to the Cretaceous. University of Edinburgh paleontologist Steve Brusatte explains that the extinction between the two periods might have been less serious than we thought. After all, plenty of animal groups transitioned with relative ease and positively thrived. Many of these were marine reptiles. Yet as Brusatte also explains, Machimosaurus did not thrive and go on further than the Early Cretaceous. After its extinction, a massive croc would never terrorize the seas again.