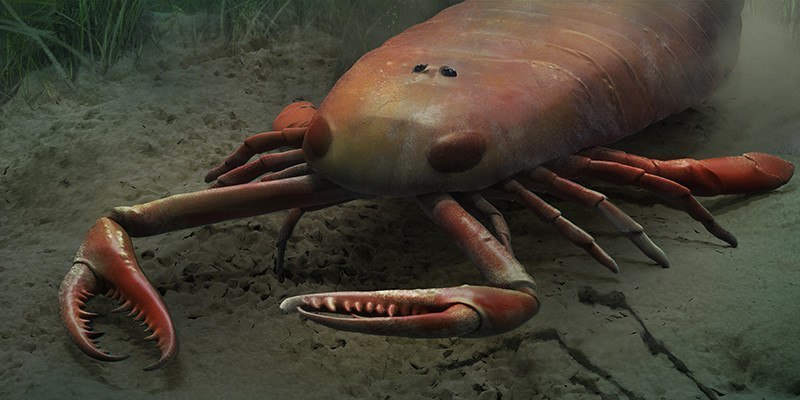 All Posts
Many varieties of armored predators ruled the oceans long before the Age of Dinosaurs. Among the most unusual were the eurypterids, the so-called “sea scorpions.” Some were the size of a human hand while others grew bigger than a man and were among the largest arthropods on Earth.

During much of the early history of life in the Paleozoic Era, animals with backbones did not exist. Therefore the oceans were filled with all manner of strange invertebrate predators and herbivores. Among the most daunting of these boneless predators were the eurypterids. They were a huge and long-lasting order of heavily armored arthropods with spiny limbs and vicious grasping claws to render prey helpless in their deadly embrace. These creatures spanned an incredibly long time, from the Ordovician (467.3 million years ago) to the Permian (248 million years ago) and came in a variety of incredible, sometimes terrifying forms.

During their reign, the resilient eurypterids saw the evolution of some of the first ancestors of corals, giant straight-shelled nautiloids and even the appearance of the earliest fish. Most of these eurypterids lived in the sea. But as time went by, a few ventured into freshwater systems, leaving their tracks in the riverine silt. The exoskeletons of these creatures make excellent fossils preserved in all three dimensions. Eurypterid fossils give us a unique look at these creatures, and we can reconstruct their bodies with relative confidence.

The first fossils of a eurypterid or “sea scorpion” were discovered in 1818 by a fossil collector named S.L. Mitchill. The holotype, the first-known specimen was collected from the New York area and was once thought to be part of an ancient catfish. It was only reclassified and scientifically described seven years later by zoologist James Ellsworth De Kay, who correctly identified the creature as an ancient arthropod. At first the animals were classified with water fleas and fairy shrimps, tiny crustaceans that live in either freshwater or near-inhospitable brine pools. It was only later that the fossil arthropod was made a member of its own unique order. 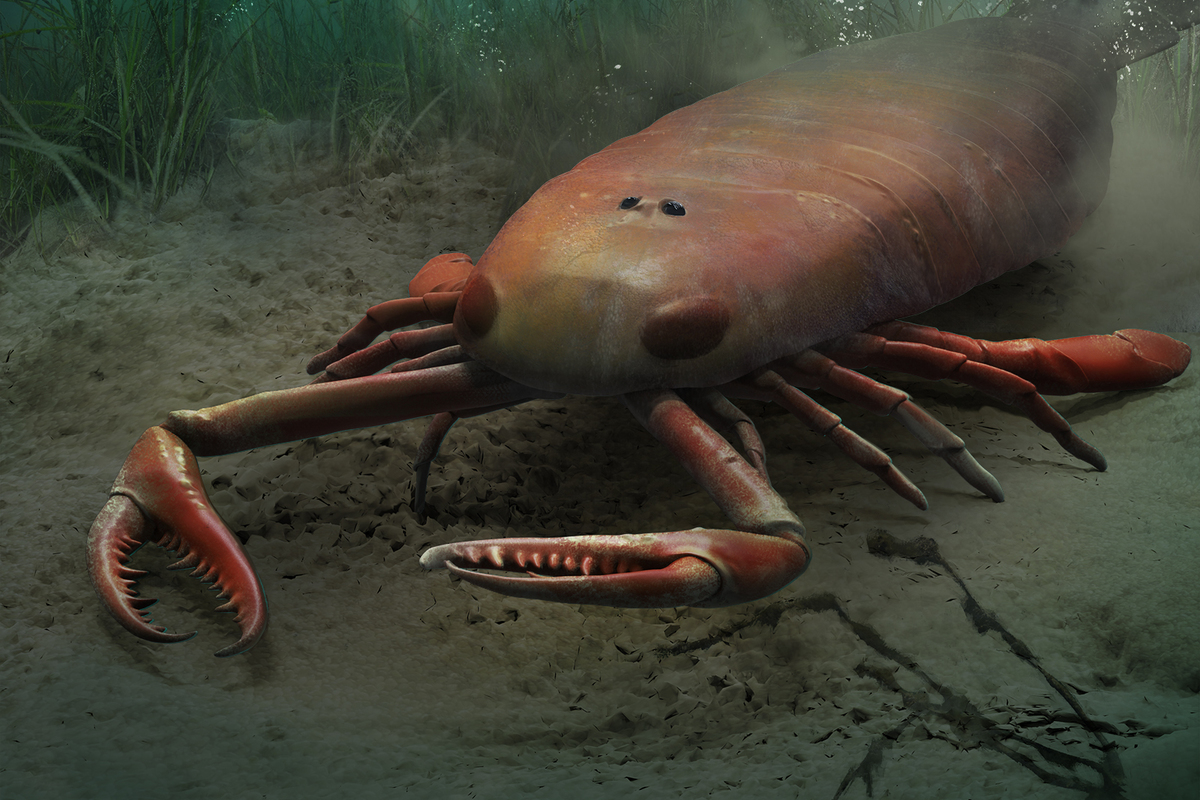 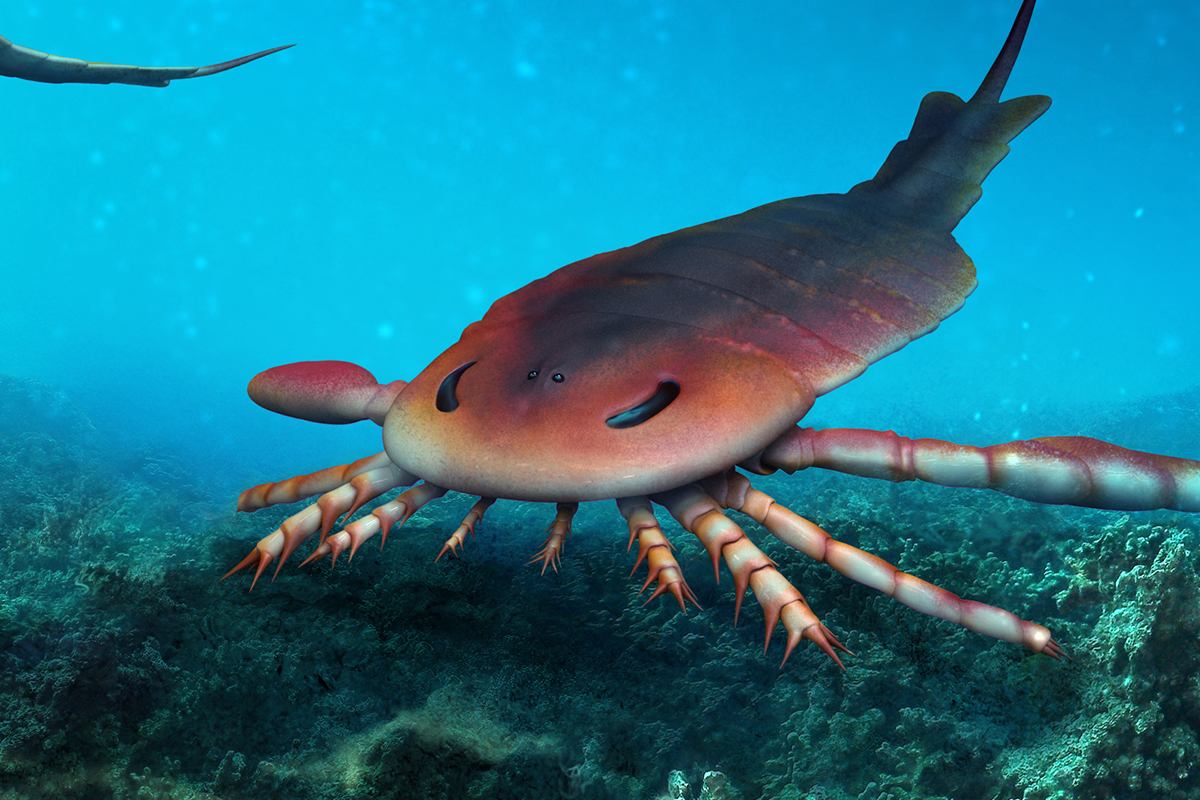 A pair of Eurypterus on a swim
Two Eurypterus take to the shallows, swimming over an Ordovician reef.
Lucas Lima and Earth Archives

Named Eurypterus remipes, the creature’s fossil dated back to a time called the Silurian. This puts it at about 432 to 418 million years old. The entire order Eurypterida was named in 1843 by Burmeister on the basis of newer species. This order was also found to be related to the arachnids of today. This is the group containing modern spiders and scorpions.

Eurypterus itself was fairly typical for its kind. It clearly seemed to have a wide distribution by today’s standards. Even back then, during the Silurian, Eurypterus localities would be spread far apart across the Northern Hemisphere. Parts of Europe and North America especially were unrecognizable at this time, with many of the northern continents existing in the midsection of the Earth, roughly around the Equator. During its reign, it was the most abundant member of its family alive.

Eurypterus set the standard for the group in general. Outwardly it has a very wide frontal region and a heavily segmented body and tail area that terminates in a body part called a telson. In scientific terms, the frontal area of Eurypterus and its relatives is known as the prosoma. This is actually six segments that have been fused to form both a head and a thorax region. Two large compound eyes are present on the prosoma, as well as a pair of ocelli or simple eyes situated on the top portion. The mouthparts are on the bottom of the animal’s “head”, and are guarded by a pair of powerful chelicerae, sometimes commonly called pincers. These would have been somewhat similar to the claws of a crab, lobster or even a scorpion. These specialized limbs are used to capture and tear apart food items before passing them into the creature’s mouth.

The second part of the eurypterid body is the opisthosoma, which includes of course the tail area, containing twelve moveable segments and a long, pointy telson. The end to the tail contained no venom like that of a modern scorpion. Just like modern scorpions, it may have breathed through gill books or book lungs. These organs would have been situated in the abdominal area and resembled the pages of a book, hence the name.

The animal’s other limbs included a pair of long and strong paddle-shaped back legs for swimming, while the other legs were chiefly used to walk on shallow sea beds as it searched for carcasses and detritus on which to feed. Alien though this look may seem to us, it was clearly a design that worked overall for the sea scorpions existed for many millions of years. Eurypterus is not only globally distributed but also varied drastically in terms of size. Most typical specimens are small animals around 20 centimeters long while the biggest are more than six times longer.

Despite this formidable size though, Eurypterus was far from being the biggest of its kind. That record goes instead to what might have been the largest arthropod ever to have lived. Its name is Jaekelopterus, and it is best known from the rocks of Rhineland in Germany.

This spiky marine monster is known from remains of a claw discovered by two scientists from the University of Bristol. Both Simon Braddy and Markus Poschmann published the find of the mighty Jaekelopterus rhenaniae in the journal Biology Letters in 2007. The animal came from the Early Devonian of 400 million years ago and probably lived and hunted in freshwater systems rather than in the sea. This phenomenon was not so unusual, for not all “sea scorpions” were even marine animals. The majority of earlier ones were indeed sea creatures but later genera had moved into rivers and estuaries. It was calculated that the massive animal was 2.5 meters in length not counting its chelicerae. Including these, it would be a meter longer, thus making it the largest and most powerful arthropod ever to have lived.

There were plenty of carnivorous eurypterids around, with even the earliest being formidable hunters. One of the most recent eurypterid discoveries is that of Pentecopterus. It was discovered in Ordovician rocks in Iowa, around 467.3 million years old. This makes it not only the oldest member of its family on record but also among the largest, at 1.83 meters long. Pentecopterus is named after a Greek warship known as a penteconter. The fossil was scientifically described last year in the journal BMC Evolutionary Biology by James C. Lamsdell and colleagues from Yale University. Not only was it one of the first sea scorpions but it was also described as the world’s first big predator.

During the Paleozoic Era, or the “Age of Ancient Life,” there were numerous spinless leviathans cruising around the seas.This kind of size was not unusual among extinct marine invertebrates. For millions of years, some of the largest animals on the planet were orthoconic nautiloids. These were huge cephalopods or squid-like animals that lived in long, pointed shells that grew as long as a truck. They thrived alongside a slew of trilobites up to a meter long, as well as sea scorpions themselves and coil-shelled swimming predators called ammonites.

The reasons for such a high number of massive invertebrates were explored in a paper by Christian Klug and colleagues in a journal called Lethaia. In the paper, published in 2010, the team found that giant marine invertebrates were the norm for millions of years before any sea scorpions could evolve.

These giants appeared due to a number of factors during both the Ordovician and the Devonian, when eurypterid diversity was at its height. One such event that gave rise to this plethora of titans is the Devonian Marine Nekton Revolution, when life in open pelagic waters was highly concentrated and it led to an explosion of life. Some of the products of this boom were the slow, ambush hunters like orthoconic nautiloids and the smaller eurypterids. Trilobites still crawled along the seafloor during these diversifications, scavenging and hunting small animals as they did millions of years before.

This event was a diversification event, and one that seems to be tied to the spread of Paleozoic marine giants. Plus there were climatic changes, with cooling events that occurred during the Devonian especially. Colder waters were more rich in nutrients, so the massive invertebrates could spread around the world, hence the high concentration of them in Devonian equatorial latitudes. Jaekelopterus and other huge eurypterids at the time were part of this massive boom of life and they proved successful enough as a group.

Body fossils are not all the eurypterids have left behind. Rather, we have other more tantalizing remains of these animals, so-called trace fossils or ichnofossils. Trace fossils may include fossilized feces and footprints, and sometimes they can give us a better look at an animal than a body fossil can.

One such series of eurypterid footprints belongs to a later member of the family. The location of the footprints is West Lothian, Scotland and they date back to the final days of the eurypterids. These footprints are from the Carboniferous, around 330 million years ago and they belonged to one of the most unconventional-looking sea scorpions ever. It did not have the typical shape of Jaekelopterus and Eurypterus. Rather, the trackmaker had a vaguely horseshoe crab-like front and a long, thin tail. It had been dragging the end of its tail behind as it walked on its six thick, jointed limbs.

The beast in question is Hibbertopterus, a two-meter long, meter-wide feeder of detritus and sunken plant and animal matter. It was among the last of its kind to exist. The footprints in the rocks here show us an animal that was aquatic but could also take a few steps on land. In fact, this eurypterid was among the first to do this.

Dr. Martin Whyte from the University of Sheffield discovered the find while on a walk in the area, and paleontologists and geologists from Scottish National Heritage rushed to protect it. The rock-face had been subject to intense weathering, and had become fragile so there was a real danger of losing the precious find. It was not only the largest invertebrate trackway ever but also the largest eurypterid track on record. While Hibbertopterus might seem atypical to some, it was normal for a sea scorpion of its day, lacking the powerful claws of the earlier more predatory species.

Despite the changes they went through, the eurypterids as a group never went beyond the Permian Period. The reason behind the sudden death of the sea scorpions and scores of other marine and terrestrial animals of the period was due to the mighty Permian Extinction. This was the worst extinction event in the history of life. It took the lives of more than 96 percent of all marine life on Earth. Eurypterids of course, were victims of this extinction too, with all of them being wiped out at the end of the Paleozoic about 252 million years ago.

The great Permian Extinction was possibly caused by a number of natural disasters, including possibly a collision with a comet, just like the end-Cretaceous extinction. Another possible cause might be an increased amount of volcanic activity around the world, with the infamous Siberian Traps being the possible epicenter of these eruptions. The eruption covered an incredible area of around 770,000 square miles in perhaps the greatest flood basalt eruption in history.


Related Stories
The colorful world of the trilobites
Late-living kin of iconic Burgess Shale worm found in England
When monsters ruled the water: The Age of Fishes
A new fossil lace bug with unusual antennae joins the “big” club
How the first forests changed the global climate
//sulc.us/s8yxc
/articles/gigantic-scorpions-hunted-in-ancient-seas/