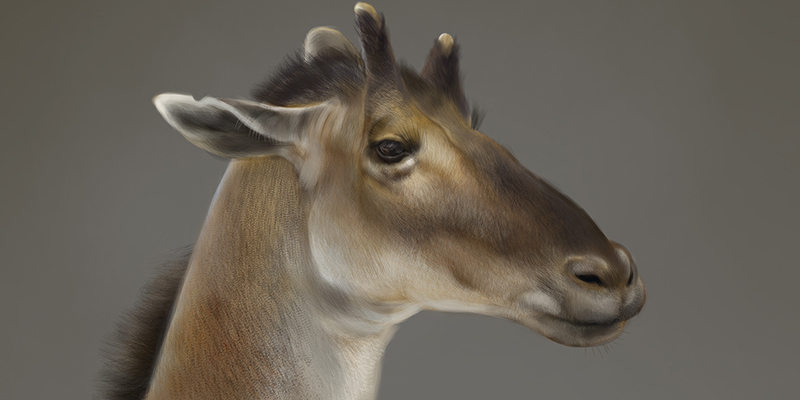 All Posts
Giraffes are one of the world’s most iconic animals, thanks to their unusually long neck. It is a trait not seen in another living member of the family Giraffidae, the okapi. One fossil animal from the island of Samos, Greece, had a neck that is somewhere in-between its living relatives.

Samotherium major, or “the beast of Samos,” lived about 7 million years ago in what is now Greece. Although it has been known to be a transitional fossil animal, fossils showing the elongation of the giraffe’s neck have been scarce.

Three researchers from the New York Institute of Technology set out to find clues on the giraffes’ evolutionary history by piecing together Samotherium remains. By inspecting vertebra fossils from multiple individuals, the team managed to get a clearer vision of what a complete set of 7 vertebrae from an animal would look like.

The 1-meter-long (3.3 ft) neck bones were then compared to those of modern-day giraffes and okapis to determine the relationship between the three giraffids. According to the team, Samotherium’s second and third vertebrae showed mixed features similar to either giraffes and okapis, while the fifth to the seventh appeared to be transitional. Most notably, the sixth vertebra showed a ridge on its surface like an okapi, but not the giraffe.

Detailed anatomical analysis suggested that Samotherium is not an ancestor of the giraffes, but a close relative nevertheless. This study gives researchers more insight on the evolution of the giraffes’ iconic long necks.


Related Stories
The giraffe's heavyweight cousin gets a facelift
The biggest rodents in the world used their teeth as tusks
New Zealand’s 25 million year old “Dawn Whales”
Prehistoric version of a marmot shared Madagascar with dinosaurs
How the giraffe got its long neck
//sulc.us/nlhqy
/articles/fossil-vertebrae-reveal-clues-to-evolution-of-long-neck-in-giraffe/