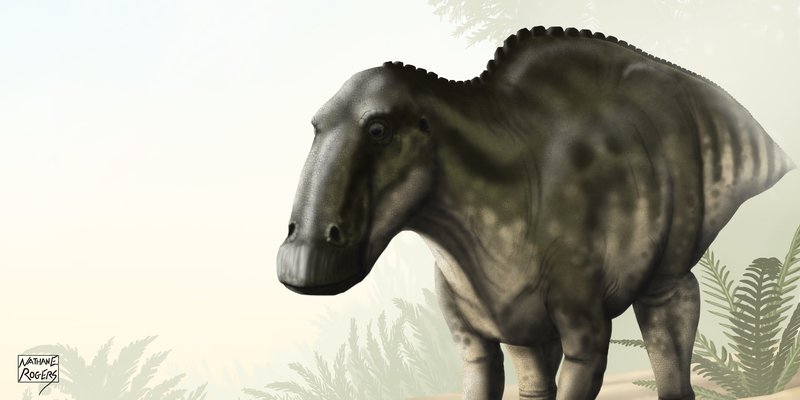 All Posts
Arguably the scientifically best-known dinosaur in the fossil record, Edmontosaurus is known from countless remains that range from single vertebrae to exquisitely preserved natural mummies. Through finds like this we have an incredible view of one of America’s biggest and most successful herbivores.

Two species of Edmontosaurus are known in the fossil record: Edmontosaurus regalis was the earlier one and Edmontosaurus annectens lived later. Together the two animals are not just among the largest duckbill dinosaurs but also the best-known thanks to the exquisitely preserved remains. Thus the two animals can be restored confidently as living animals and a great many details can be inferred about their lifestyle. Fossils of the earlier species were first discovered in 1871 by Edward Drinker Cope during the maddening years of the Bone Wars.

It was first named under the wastebasket genus name Trachodon, which was used on several duckbill dinosaurs at the time. Soon many fragmentary Edmontosaurus remains would fall under the name of Trachodon. What is considered as the type specimen, or main specimen, was discovered in 1912 by fossil hunter Levi Sternberg, father of the famous George F. Sternberg.

The find was from Canada’s Horseshoe Canyon Formation, a rock bed roughly 73 million years old. The name Edmontosaurus regalis means “regal lizard from Edmonton” – the regal nature of the animal evidently comes from its huge size and robustness. Soon after, the Sternbergs would go on to discover numerous impressive Edmontosaurus finds. These fossils revealed a powerful animal of 12 meters long, the biggest duckbill known at the time from North America. This was not the end of the story. Further to the south, something else was going on. 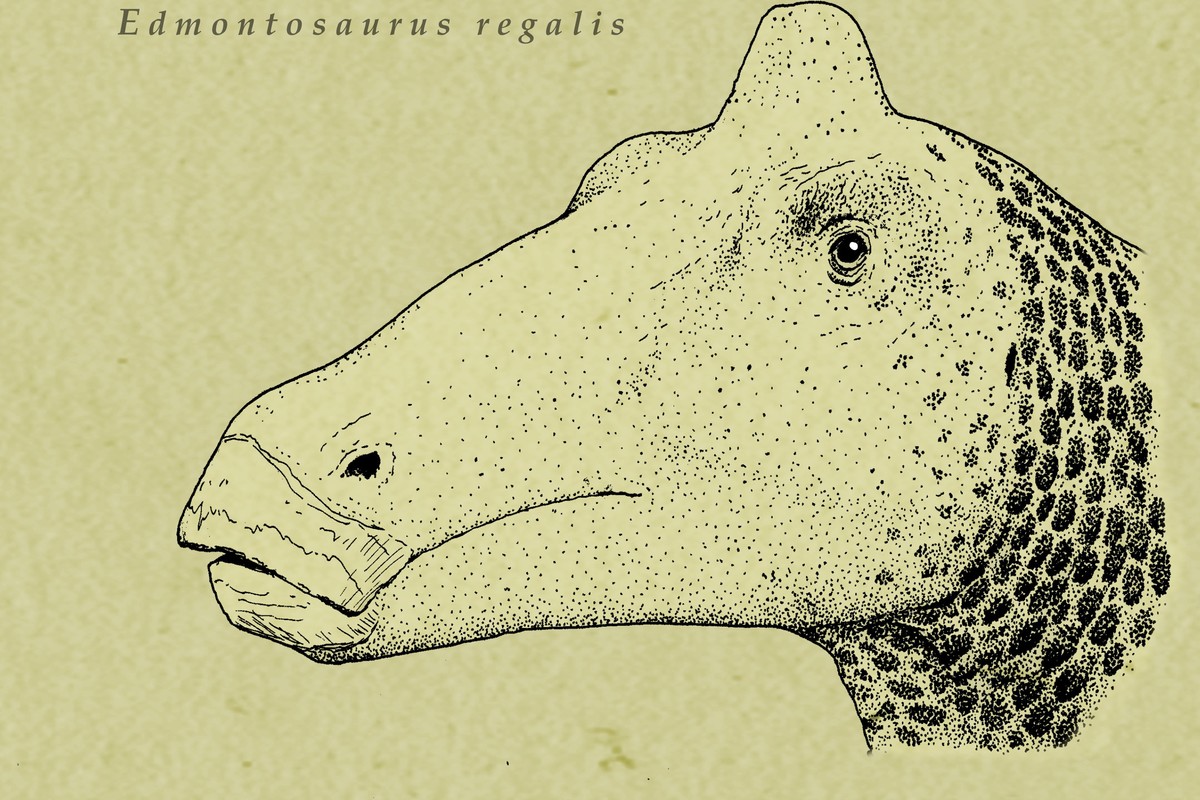 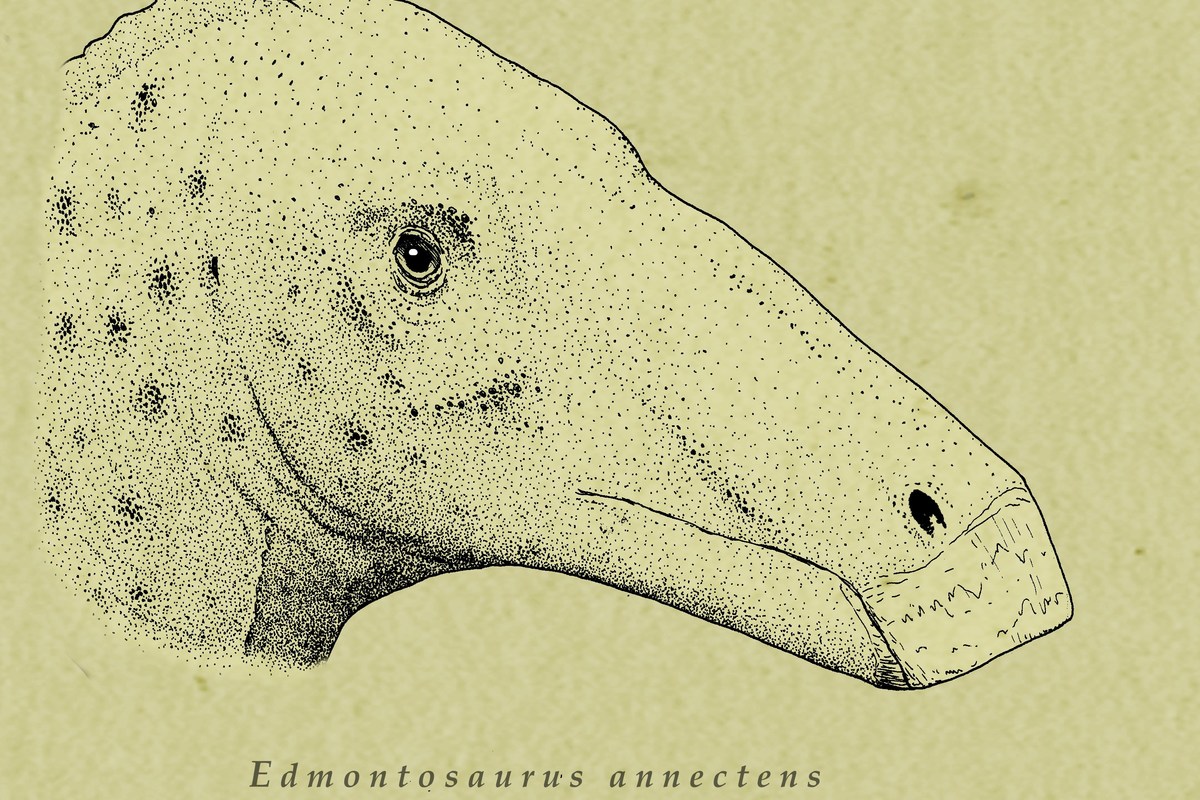 Another duckbill had been described, yet another unfortunate animal to be lumped in with Trachodon. Its skull was longer and flatter than the northern E. regalis and it too had history with Cope and Marsh, the two big names during the Bone Wars. This new animal went under several different names until finally it was put down as Edmontosaurus annectens. Othniel Charles Marsh named the animal based on a find from Wyoming’s Lance Formation, roughly 66 million years old. This makes it younger than E. regalis, living at the end of the Dinosaur Age.

More names would come however, including "Anatosaurus" and the more evocative and popular "Anatotitan". Soon it was realized that all these animals were the same thing. E. annectens simply changed its skull shape as it grew up. Those referred to "Anatotitan" had the longest and flattest skulls. They were thus the oldest in terms of age. The same type of skull changes is true of the Canadian species as well.

Both E. regalis and E. annectens were the biggest animals in their respective environments and new finds are constantly turning up. For one, we know that the younger species was probably the largest duckbill to have ever existed. A find known as MOR 1609, or "X-Rex" consists of just a 7.6-meter tail. The impressive find was included in a census of Hell Creek dinosaurs by paleontologist Jack Horner in 2011. From remains like this, it is thought that they could exceed 15 meters in length and weigh 10 to 15 tons. They outweighed and severely outclassed the contemporary Tyrannosaurus in terms of size.

However this huge size or super-adult size, was rare among duckbills. High infant mortality rates meant that very few would ever reach such gigantic proportions. Rather many youngsters would fall prey to the numerous predators of Lance and Hell Creek, two of the best sites for E. annectens remains. A healed bite mark on a duckbill’s tail shows that even moderately large animals could come under attack. The attacker was obviously a Tyrannosaurus, and the healing in the bone suggests the prey animal had shaken off its attacker and survived.

New finds are coming from north of the border as well. Not only is skin known for E. regalis but we now know that it had a coxcomb-like skin crest on top of its head. The find was published in 2013 and took the world by storm. This little skin crest was nothing however, compared to the wide variety of E. annectens skin remains. Numerous natural mummies are known, formed when the animal died and was preserved by muddy river sediments. This preserved much of the creature’s soft tissue and allows for an in-depth look at Edmontosaurus and its lifestyle.

The most famous recent mummy was nicknamed "Dakota." It was an 11-meter young Edmontosaurus, discovered by then-high school student Tyler Lyson in 1999. It was only seriously studied in 2007, even being subject to a CAT scan. "Dakota" preserves not just the scaly skin but even the animal’s muscles. From this find it was realized just how strong and fast a creature Edmontosaurus was.

It could rear up on its hind limbs and run at 45 kilometers per hour (28 mph), faster than a running T. rex. Its massive back legs were powered by an impressively muscled tail that made the creature even more of a powerhouse. "Dakota" had a very thick, fleshy neck and back too, thus rounding off an already impressive profile. For a long time, duckbill dinosaurs had been portrayed as the "cows" of the Late Cretaceous – easy and helpless prey for savage tyrannosaurs. Yet the very powerful structure of both Edmontosaurus species certainly belies this traditional interpretation.

Through finds like this, we can restore both Edmontosaurus species with a degree of confidence unlike with any other dinosaur. For example, we know that both these animals lived in forests of bald cypress and conifers similar to modern cypress swamps. They were both able to rear up on their hind legs to reach vegetation far above the ground. An especially huge animal like E. annectens would have had a huge impact on its environment simply due to its power and size. Yet the giant duckbill's glory was short-lived.

E. annectens is not only the biggest herbivore in its environment but it was also one of the last dinosaurs to exist. The Late Cretaceous world would come to a crashing halt during its existence as a species 66 million years ago. With the infamous asteroid hitting the Gulf of Mexico, a vast percentage of animals, both large and small were wiped out.

The Hell Creek Formation preserves some of the last dinosaurs ever, even preserving the boundary between the Age of Dinosaurs and the Age of Mammals, the K-Pg Boundary. Beyond this, we have no fossils of Edmontosaurus or any other huge dinosaurs.


Related Stories
How duck-billed dinosaurs evolved to have more than 1,000 teeth
Machairoceratops, the “bent sword” wielding dinosaur from Utah
Tiny bonehead skull uncovers the early life of Pachycephalosaurus
Retired nuclear physicist finds horned dinosaur
A specimen of the dryosaurid Valdosaurus has been discovered on the Isle of Wight
//sulc.us/4tvzm
/articles/edmontosaurus-the-great-american-duckbill-dinosaur/