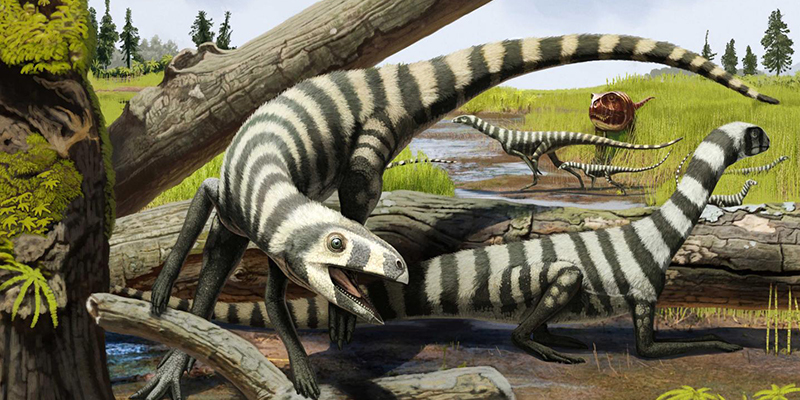 All Posts
Many of the ancestors of the earliest dinosaurs were small, active and lizard-like animals. Yet their growth patterns have been somewhat of a mystery. Recent studies of their bones suggest that size is not always a good determinant of skeletal maturity.

It is well known that the dinosaurs grew up incredibly fast and often died young, reaching sexual maturity long before skeletal maturity. Despite the wealth of information on the dinosaurs’ growth patterns, not much is really known about how their ancestors and early evolutionary cousins grew up. That is, until now, after a study by Virginia Tech College of Science researchers was published in the Journal of Vertebrate Paleontology. The new study was led by Christopher Griffin, a geosciences master’s student and the subject of the study was the ancient dinosaur cousin Asilisaurus. Analysis of the fossils by both himself and Sterling Nesbitt revealed something interesting.

It was thought that the differences in size of individual animals was due to differences between the sexes. The new study by Griffin and Nesbitt has revealed otherwise, that it was due to differences in maturity and growth rates. All the fossils that were recovered and used in the study, came from a family of animals that had grown up in the same place, and at the same time. Yet they had not developed into maturity the same way, instead going through their maturity at different rates. Muscle scars showed that some had the tendency to be more robust, while others were skinnier and still others were very large and a few were incredibly small. Naturally, the analysis revealed that the muscle scars grew larger and more prominent as the animals grew larger. The maximum size was roughly a meter to about three meters in the case of the biggest individuals.

Asilisaurus belonged to a unique family of dinosaur relatives called the silesaurids. They were distributed all around the world and could possibly alternate between two-legged and four-legged stances. These creatures were all long, lightweight omnivores that lived during the Triassic and went extinct when the period ended. Fossils of Asilisaurus kongwe come from the Middle Triassic of Tanzania, about 240 million years ago. This was around the time when the very first dinosaurs emerged, and indeed the two animal types might have looked similar to one another for the most part. Whether or not Asilisaurus was covered in feathers like most small dinosaurs, is unknown.


Related Stories
Sharovipteryx, the Triassic reptile with leg-wings
The odd little reptiles of the Triassic forests: Longisquama
The evolution of ichthyosaurs, the mighty "fish-lizards" of the Mesozoic
Clash of the Triassic titans
Our relatives may have been hyena food 500,000 years ago
//sulc.us/cth5j
/articles/dinosau-relatives-lived-life-in-the-fast-lane/