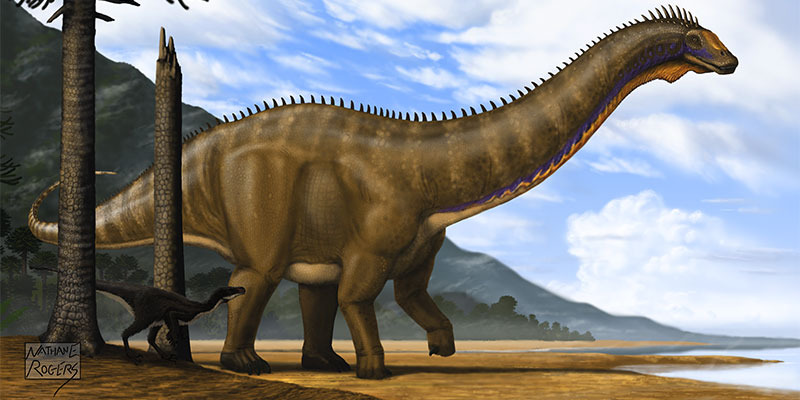 Apatosaurus’ supersonic tail might have cracked the sound barrier

All Posts
It all started in mid '90s when Nathan Myhrvold, a computer scientist, wondered if the tails of Diplodocid sauropods could have made a cracking noise similar to a bullwhip.

Diplodocids are a subgroup of sauropods, the gigantic herbivores known for their exceptionally long neck and tails. Unlike other sauropods, diplodocid tails were thick at the base but tapered off to a whip-like thin section at the end, leading to the suspicion about how the dinosaurs might have used their rear end.

Myhrvold eventually digitally simulated the tail of one species, Apatosaurus louisae, and published his paper on the subject with Canadian paleontologist Philip Currie in the journal of Paleobiology in 1997. In the paper, he argued that such tail would have been able to make a loud enough noise for defense, communication, intraspecific rivalry or even courtship. Kenneth Carpenter, the director and curator of paleontology at Utah State University Eastern Prehistoric Museum was not convinced by the idea. He challenged Myhrvold to build a scale model to back up his argument.

Nearly two decades later, Myhrvold finally managed to build a 20kg (44 lb) model and presented it at the 75th annual Society of Vertebrate Paleontology this year. Although it was impossible to build one with proper skin and flesh, the aluminium and stainless steel model simulated the dinosaur’s skeletal structure.

Myhrvold and his team then recorded the tail as it was flicked side-by-side using a Phantom high-speed camera and found out that the tip of the tail moved faster than the speed of sound, at 360m/s (1,181 ft/s). The team also added that when scaled up to the size of the real animal, such tail would have made a noise more like a cannon fire than the crack of a whip.

Carpenter still argued, however, that the model lacks the subtle structures that would have existed in a real tail, such as the connector between each vertebra. Structures like this, in addition to skin and muscle, would probably stiffen the tail considerably. Such motion would also break the delicate structures, burdening the dinosaur with accumulating damage over time.

In return, Myhrvold noted that some Diplodocid specimens have been found with damaged tail vertebrae, which could have been an evidence to this behavior. He also stated that his model is still evolving and hopes that the next one will simulate the living animal even more accurately.