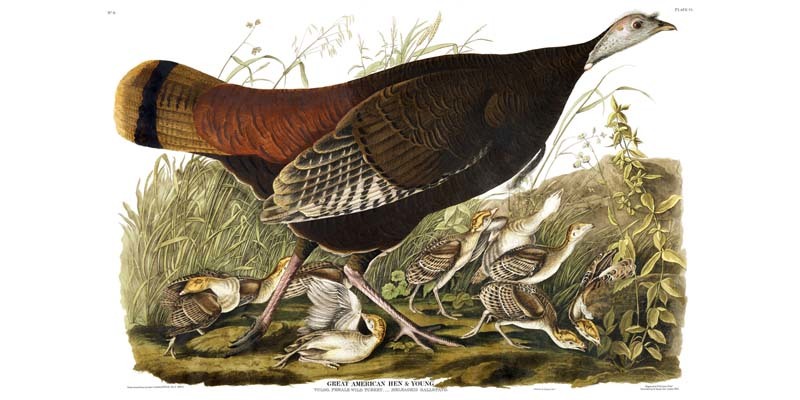 The natural history of the turkey

All Posts
Although they share their name with a Eurasian nation-state, turkeys are thoroughly American birds. Turkeys are large, flamboyent members of an American lineage of gamebirds that also includes grouse and ptarmigans.

Turkeys, Meleagris gallopavo, are one of the most distinct and recognizable birds native to North America, and for many Americans, one of the most beloved not only as the centerpiece of the Thanksgiving meal, but as an interesting and charismatic bird.

Turkeys, like most gamebirds or galliform birds, are strongly sexually dimorphic with males being larger than females. Wild turkeys weigh from 5 to 11 kilograms (11-24 pounds) in males and from 2.5 to 5.5 kilograms (5-12 pounds) in females. Both males and females have wingspans from 125 to 145 cm (49-57 inches). Domestic turkeys are generally larger, with many varieties developed to increase the amount of breast meat.

They are famous for their featherless heads and necks covered in loose colorful skin. The loose skin folds around the head and neck have specific names based on their location. Males have a long bit of skin arising from the beak known as a snood and both sexes have fleshy extensions on the underside of the neck known as a wattle. Wrinkled flaps of skin running from the top of the head down the neck are called caruncles. The skin of the head and neck is often pinkish red and blue. 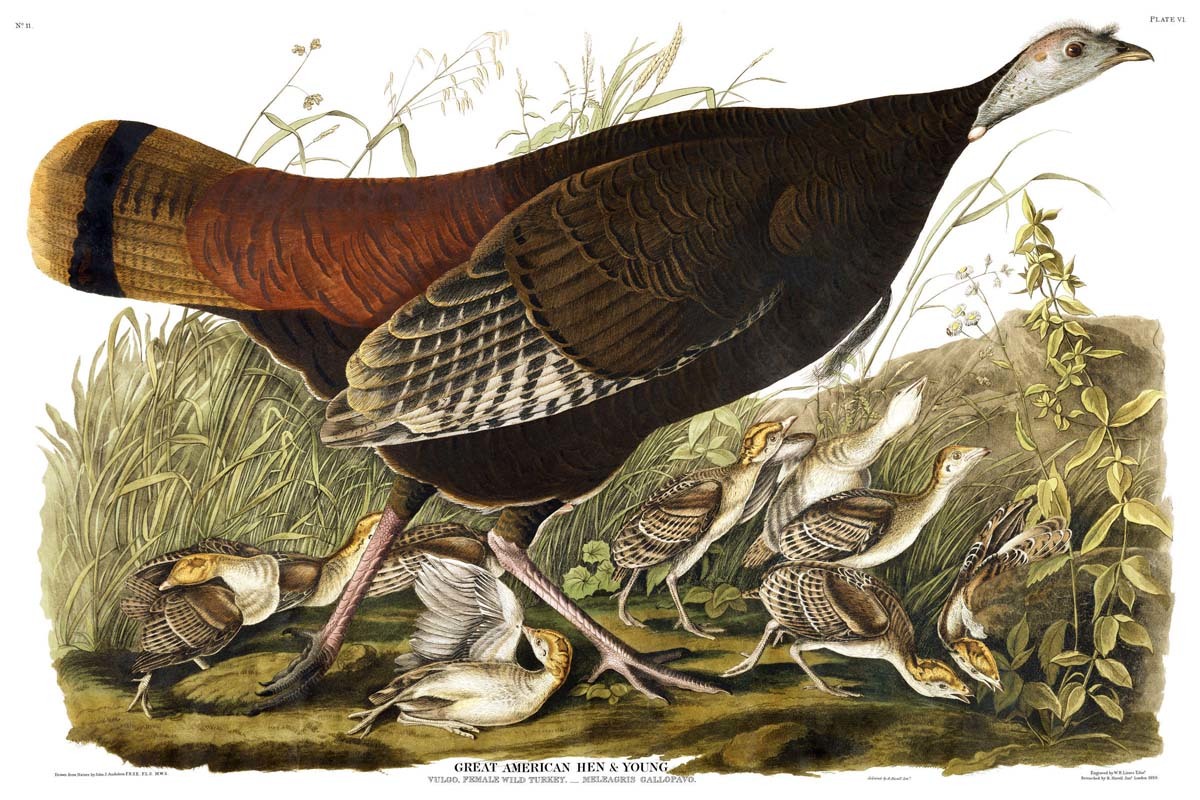 Turkeys are known for their beautiful and often flamboyant feathers. Both sexes have brown to black feathers throughout, with males having bronze colored iridescence, and females duller feathers overall. The males also have a large tail fan which is used in sexual display. Turkeys have a unique type of feather called a beard. Turkey beards are stiff hairlike feathers that arise from the breast at the base of the neck.

In the Spring, males court females by using a combination of strutting, puffing of feathers, displaying their tail fans, dragging their wings, and vocalizations including gobbling and drumming sounds. Turkeys lay 10-14 eggs in ground-level nests, and incubate them for at least four weeks. Chicks are precocial and often leave the nest within a day. Turkeys have a hierarchical social structure, and dominant males father more chicks than less dominant males. Turkeys forage on the ground or in shrubs, largely eating fallen tree nuts and other seeds, as well as berries, roots, and small animals. Despite what you may have heard from a classic episode of WKRP, wild turkeys can fly. They are quite adept at flying short distances and will often roost in trees, although they'll generally prefer running as a way to escape danger. (Although we here at Earth Archives would never recommend dropping them out of a helicopter).

Turkeys are native to the almost the entire eastern half of the United States, southeastern Canada, and central Mexico, with significant populations in the western U.S. They prefer open forests and meadows where they forage for much of the day. Turkeys were first domesticated in Mexico at least 1500 years ago, possibly even as early as 2300 years ago. The domesticated birds spread throughout the continent by the time of European colonization. Upon importation to Europe, turkeys were a hit, but were mixed up with similar-looking guineafowl from Turkey, hence the name. Wild turkeys in North America were aggressively hunted for game in the 19th century and there were fears in the early 20th century that wild turkeys would soon be extinct. Conservation efforts and introduction programs have greatly increased the numbers of wild turkeys, going from only 30,000 in the early 20th century to more than seven million birds today.

The closest living relative of the wild turkey is the ocellated turkey, Meleagris ocellata, of the Yucatan Peninsula. It is quite similar to the wild turkey in many respects, but its feathers are green with a bronze iridescence, the tail fan in males has many “eye spots” similar to peacocks, and the skin of the head and neck is bright blue with many reddish nodules. There are several fossil turkey species known from Miocene to recent rocks of North America showing that the earliest turkeys were quite a bit smaller and the march toward giant ground bird status started long before domestication.

Turkeys are part of the family Phasianidae, the pheasant family. The pheasant family is made up of two large branches, a chicken-peafowl branch, and a turkey-pheasant branch. The closest relatives of the turkeys are grouse, prairie chickens, and ptarmigans, most of which are native to North America. However, most other members of the turkey-pheasant branch are native to Eurasia. That coupled with fossil data and estimated divergence times indicates that birds ancestral to the turkeys and grouse probably migrated to the Americas about 20 million years ago, and members of the turkey clade were around ten million years ago. There are several other gamebirds that live in North America including several native species of quail, as well as pheasants, partridges, and chukars (introduced from Europe and Asia).