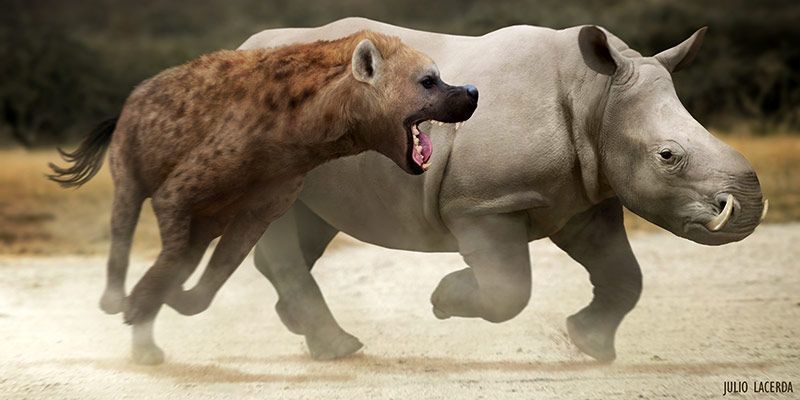 All Posts
Dinocrocuta gigantea, a hyena-like predator was one of the biggest and strongest carnivores to stalk the ancient grasslands of China. Its bite was strong enough to crush bones and it dominated its contemporary herbivores. One fossil shows us that it was clearly unafraid to take on animals much bigger than itself: Tooth marks in the skull of a massive tusked rhinoceros.

The Liushu Formation of China was filled with large and unique mammals, all dating back to the end of the Miocene. During this heyday of the mammalian era, a diverse fauna of giraffe ancestors, rhinos, three-toed Hipparion horses and elephant-like mastodons existed there. Among these animals was the large and successful rhinoceros Chilotherium, known from all over Eurasia and existing for many millions of years.

However in Liushu, a female Chilotherium had met her match. An intriguing fossil find was published in the 2010 edition of the scientific journal Chinese Science Bulletin by a team comprising Tao Deng and J. Zhijie Tseng. They described a 9-million-year-old skull and jaw bone from a female rhino with a deep injury on the animal’s forehead.

Chilotherium had no horns and instead bore a pair of curved tusks for defense and display. But the curvature of these tusks was too much to cause an injury so high on the animal’s skull. The only predator that could have caused the wound was the immense Dinocrocuta gigantea, with the puncture marks clearly matching the dimensions of the predator’s canines. According to the team the presence of only one puncture wound and subsequent bone growth over the injury indicate that the rhino had managed to fight off her attacker and escape. 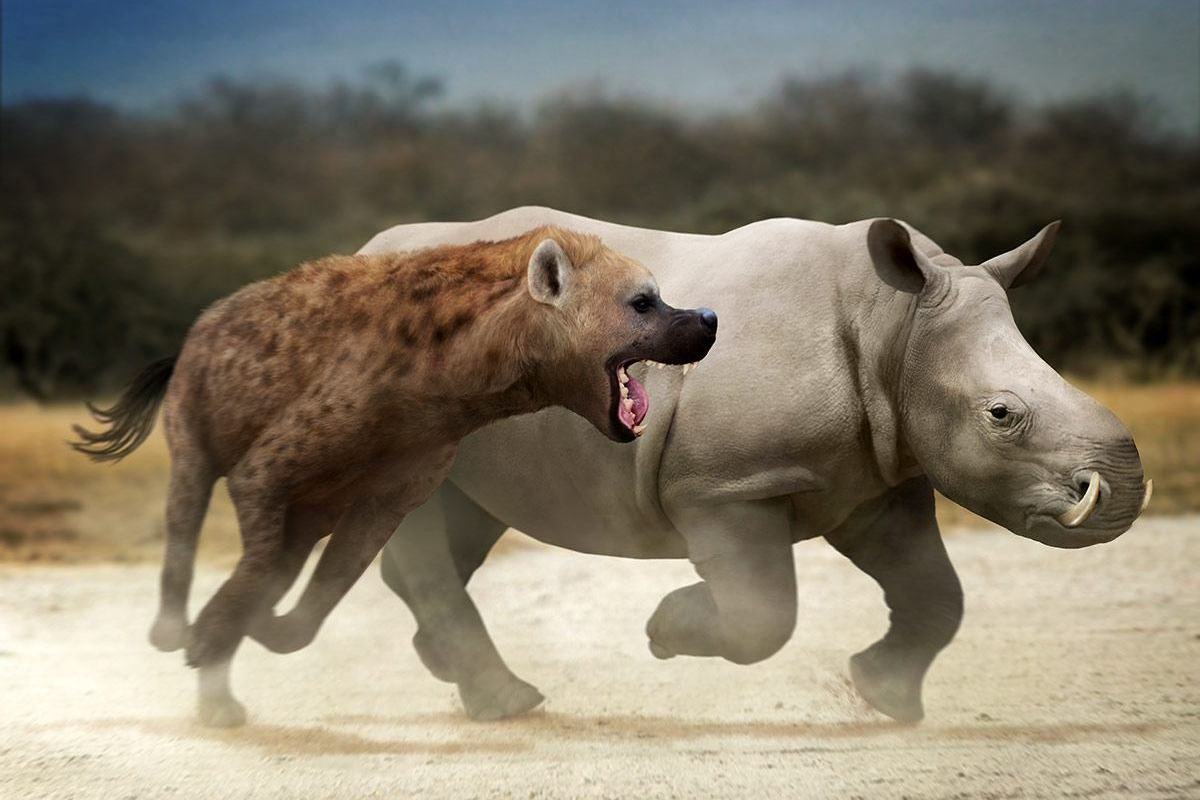 Not a true hyena, Dinocrocuta was the strongest and biggest carnivore in its region. It dwarfed both the contemporary true hyenas and the sabertooth cat Machairodus, at around 380 kilograms (838 lbs). For a long time, the best fossils of this monstrous mammal came from the Liushu in China but it was not known whether it was an active hunter or just a simple scavenger. Its teeth and skull were exceptionally strong for delivering a bone-crushing bite and it was also very well-constructed for eating bones. The same set of teeth that could dismember carcasses could also tear into the hides and bones of some of the biggest of the grassland herbivores.

Thus like modern hyenas – its closest living relatives – it was able to scavenge and take down prey equally well. Dinocrocuta was also clearly capable of preying on mammals far bigger than itself. Of course this was not without risks. The tusked Chilotherium wimani was 2 meters (6.6 ft) tall and weighed close to 3 tons (6000 lbs), and would have made a formidable target for even the strongest carnivores.

The researchers do not know if the predator was working alone or whether it hunted in clans like today’s hyenas. But the find also indicated some new details about the animals’ behaviors. Deng and Tseng revealed in their paper that even in modern grassland faunas, adult female hoofed animals may be most at risk from predators during the calving season. The scientists quoted studies of modern wildebeest herds in Africa to show the comparisons between varied faunas across time. The rhino might have been calving, or else the carnivore might have attacked a weakened individual during a drought.

With its opportunistic feeding habits, Dinocrocuta was the apex predator of Liushu. It would be a while before it went extinct and big cats would take over the role of big bone-eating killers. During the Late Miocene though, even the lion-sized sabertooths of the time had to play second fiddle to this massive predator.