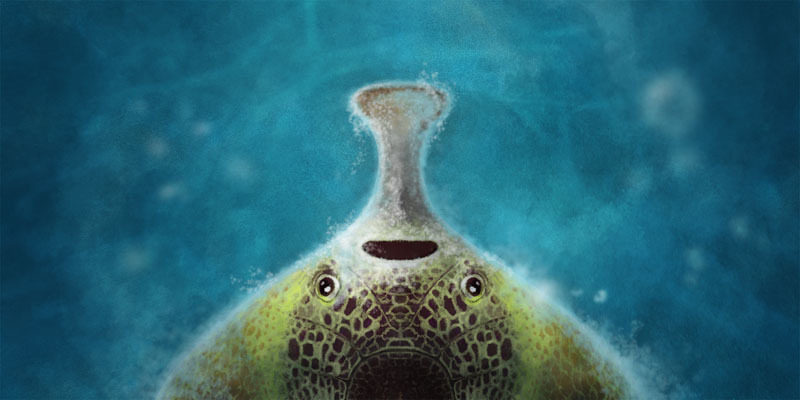 over 3 years ago by Franz Anthony

All Posts
It’s hard to imagine a life without a jaw—we need one to eat and interact with one another through speech. Yet like every other part in our body, it didn’t always exist back in life’s evolutionary history.

Strange as it may seem, these fishes thrived in the waters of this planet over 450 million years ago. They were common animals, with fossils of these peculiar creatures having been unearthed since the 1830s. Even with their limited knowledge of the deep time, the era’s scientists noticed that these fishes clearly looked like no other living animal they knew.

When they were first introduced to the public, back in the mid-nineteenth century, biologist Louis Agassiz also noted that these ancient swimmers sported distinctive heavy-duty armor on their heads.

This feature eventually became the name he gave to these “shelled-skin” fishes: ostracoderms. 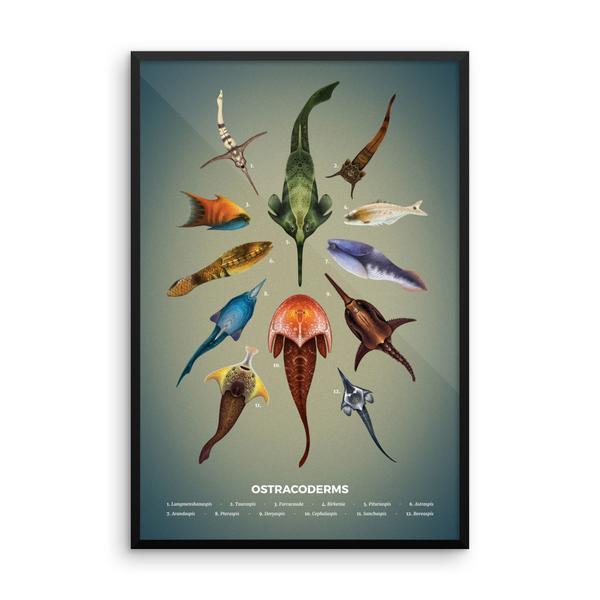 Get this image as an art print or t-shirt from 252MYA.com
Credit: Franz Anthony / Studio 252MYA 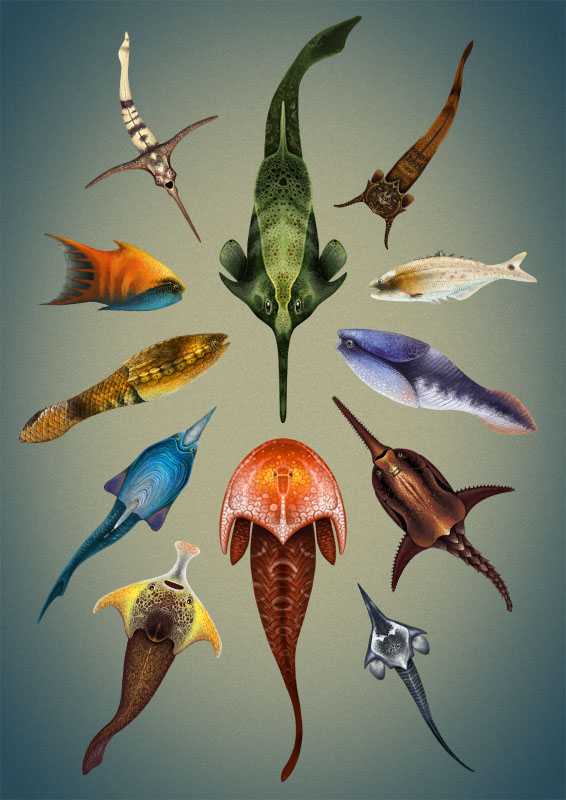 A selection of ostracoderms, the extinct armored jawless fishes. Image by Franz Anthony.


These days, fish occupy every aquatic niche imaginable: from the coldest, deepest abyss to your cousin’s backyard pond. Despite this, life was tougher for them back in the Paleozoic Era. By the time the first ostracoderms showed up in the fossil record, predatory invertebrates like anomalocaridids had reigned for millions of years and grew to gigantic size. The largest of them could have reached 2 meters (7 ft) long.

In this aqua-scape dominated by multi-legged predators, the ostracoderms were relatively small and simple. Many even lacked any kind of fins except on their tail, unlike the fishes we’re familiar with today. Some of the earliest forms looked like tadpoles with a stone helmet.

Unexpectedly, this armor was not like the thickened skin of familiar animals like crocodiles or armadillos. According to evolutionary biologists, their peculiar armor had a structure like our teeth. When viewed under a microscope, it was formed by layers of dentin and enamel, as if ostracoderms crafted a wearable headpiece out of thousands of fused tiny teeth.

Considering most of them didn’t grow larger than a human adult’s hand, It is possible that their “toothy armor” evolved to protect against predators. Unfortunately, the actual predator-prey interaction of the period has not been investigated in depth, so the exact function of their shield remains unknown. 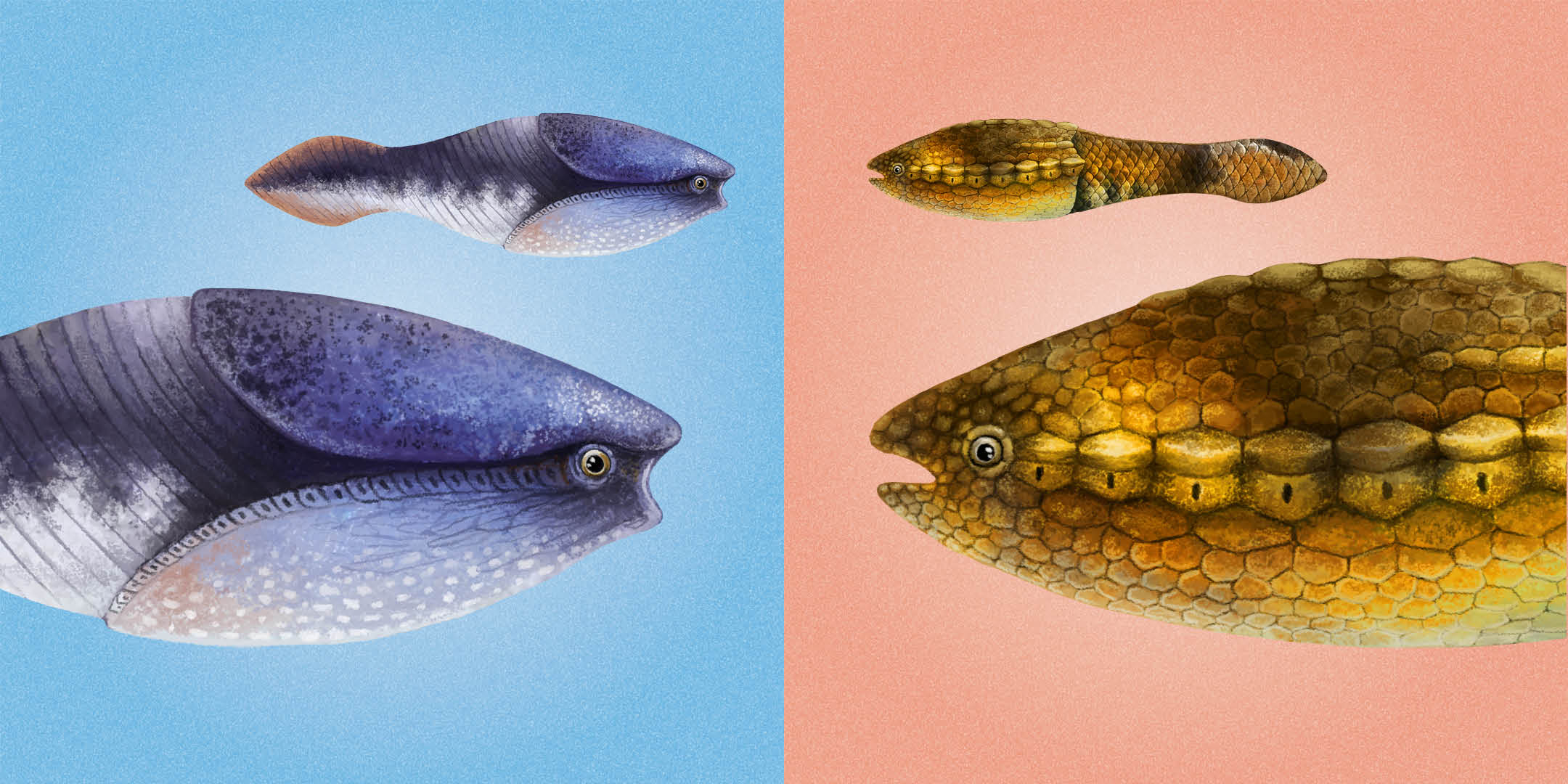 
However, a study by Héctor Botella and Richard Fariña published in 2008 suggested they may play some role in helping the finless fishes maneuver in the water. One particular fish they studied called Errivaspis had a shield that could generate water vortices like a delta wing aircraft.

In 2017, another study by Humberto G. Ferrón and Héctor Botella compared the scales of the ostracoderm Furcacauda and its relatives — collectively known as thelodonts — with sharks. According to the team, Furcacauda’s scales were shaped to resist abrasion from rocky surfaces, similar to bottom-dwelling, reef-crawling sharks. Meanwhile, some other thelodonts had drag-reduction scales that could have helped them swim in the open oceans.

These studies suggest that despite looking similar as a group to the untrained eyes, ostracoderms were very diverse creatures adapted to occupy different parts of the ancient waters. 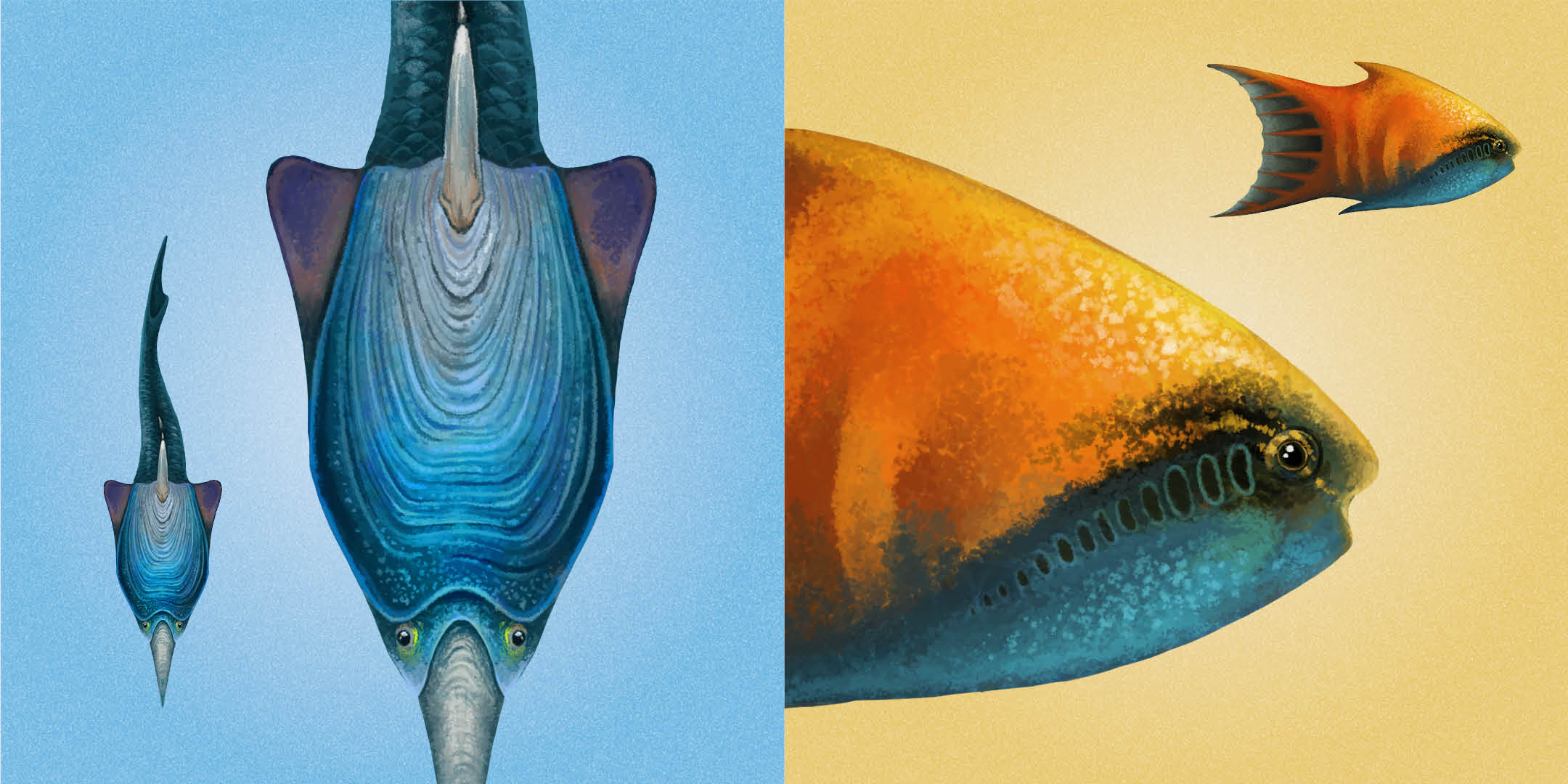 
But without jaws, how did they feed themselves?

The absence of jaws doesn’t mean they lacked a mouth. Their lips were movable to some degree, although they were unable to bite or create a strong enough suction to inhale prey like today’s fishes. The more active ostracoderms likely swam through the water with their mouth open similar to whale shark or manta ray. Meanwhile, the majority likely fed on the algae or small animals near the bottom of the water like today’s armored catfishes.

In fact, the ostracoderm Cephalaspis resembled an armored catfish at first glance. With its big, armored head, this trout-sized fish could have stirred the bottom sediment to reveal prey animals hidden in the mud. It was also armed with sensory patches along the rims of its skull, which helped it sense burrowing animals in the Devonian Period estuaries it lived in. Other ostracoderms like the Cephalaspis relative Boreaspis even had a long snout that could have helped it uncover buried food objects.

Their strangely shaped heads also gave them a hydrodynamic advantage. Ostracoderms like Cephalaspis and Boreaspis lived in an environment with turbulent waters like today’s estuaries or deltas, which supplied them a steady flow of fresh nutrients. Without a streamlined, flat head, they would have spent much of the energy fighting the currents. 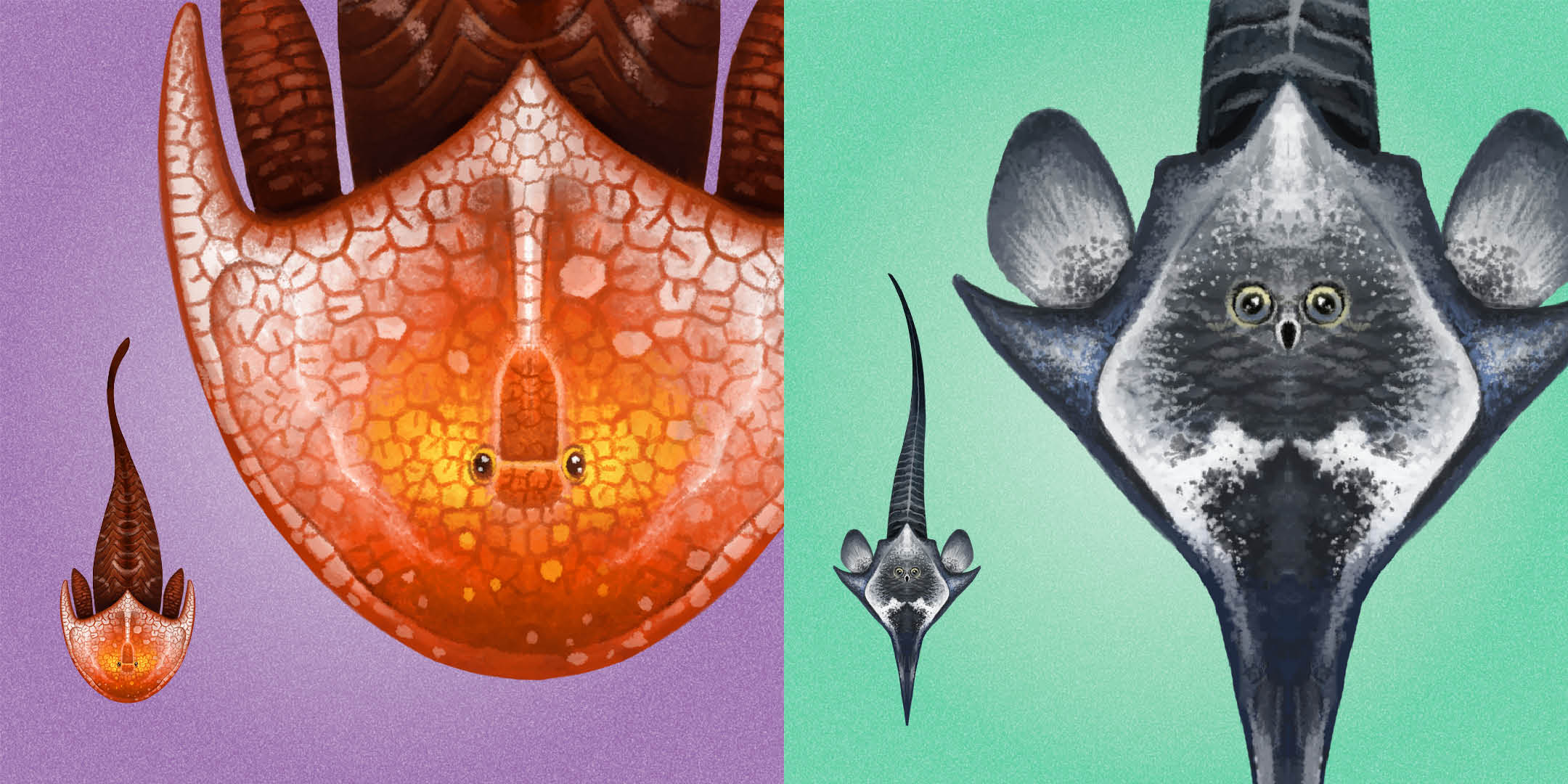 
One peculiar group of ostracoderms found in China called the galeaspids took weirdness to an extreme. They evolved a gaping hole larger than most other ostracoderms’ on top of their heads. Such a hole, which gives galeaspids a rather comical appearance, helped them smell and breathe. While today’s fishes take in oxygenated water through their mouth, the galeaspids breathed through this opening instead.

This feature, along with flattened bodies and downward facing mouths suggests that many ostracoderms were adapted for a life at the bottom of the water. 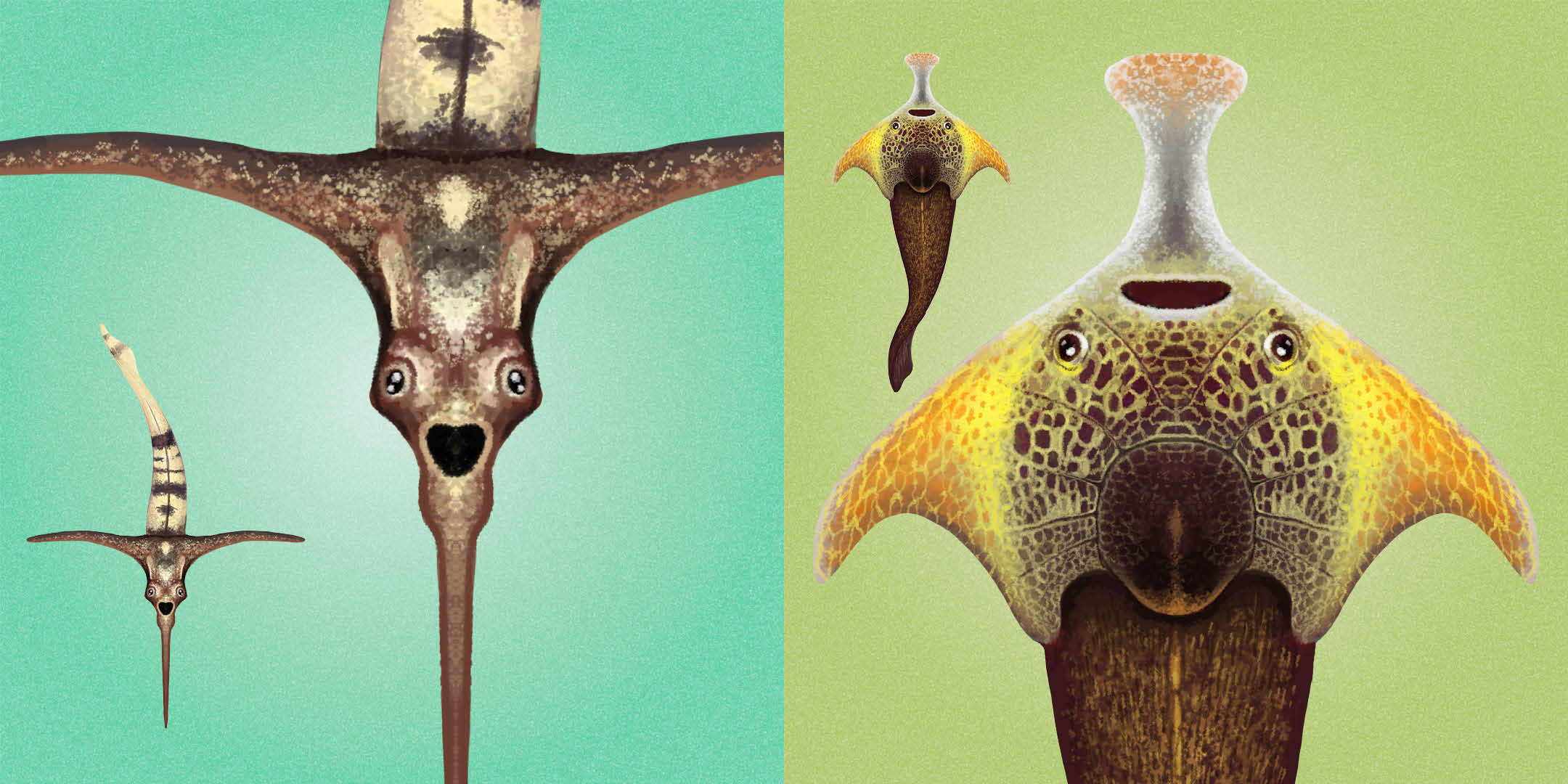 
Ostracoderm diversity peaked at the end of the Silurian Period roughly 419 million years ago, when they outnumbered any other kind of fishes. Although the following Devonian Period is also known as “The Age of Fishes,” the ostracoderms went through a steady decline while another group of fishes diversified more rapidly. Yes, you guessed it: the jawed fishes. After about 30 million of years of coexistence, the ostracoderms finally went extinct, leaving the jawed fishes to take over the waters.

Scientists don’t know what factors led to the “shelled-skin” fishes’ demise. While competition between fish groups hasn’t been studied, paleontologist Lauren Sallan noted in her 2015 study that some ostracoderms did get larger alongside other fishes during the Devonian, suggesting some kind of interaction between them. It is also possible that the changing environment of the Devonian played a role in favoring jawed fishes. Today, only two groups of jawless fishes still exist—hagfishes and lampreys—although they descended from fish unlike the ostracoderms.

With more than 30,000 known species living today, there is one species of fish for every mammal, bird, reptile, and amphibian combined. It’s impossible to ignore the impact of the fishes to life on Earth over five hundred million years of their history, yet fishes are still largely understudied compared to other groups of animals.

Only by better understanding the diversity of extinct fishes and how they lived, will we be able to paint a fuller picture of the history of life.

Special thanks are owed to paleontologist Lauren Sallan in research and preparation of this story.