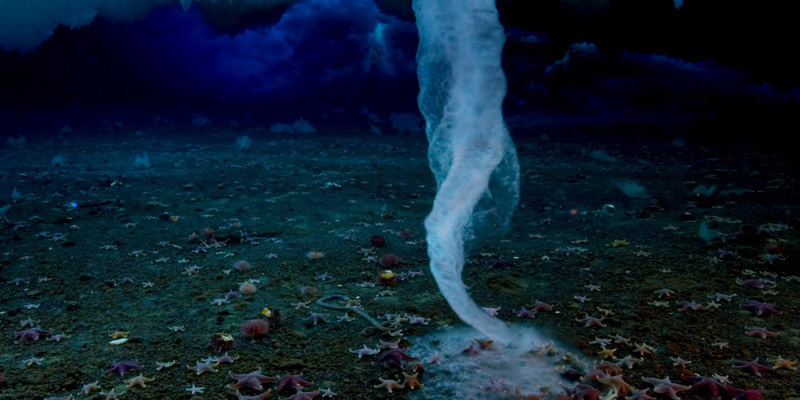 Ice finger of death beneath the Antarctic ice

All Posts
A brinicle is a finger-like formation that grows underneath sea ice. The formation process of this ‘ice finger of death’ has been captured for the first time on camera.

Although already known since the 1960s, brinicles are rarely observed in real time. This phenomenon only occurs in specific conditions in the polar regions of the Earth, under blocks of floating sea ice.

Unlike frozen fresh water, ice on ocean surface is composed of two elements. The ice crystal is relatively pure, as the water excludes most of the salt during the freezing process. The remaining salty water stays liquid due to its lowered freezing temperature, and creates highly saline brine channels within the porous ice block.

A brinicle is formed when this sea ice cracks and leaks out the saline water to the open oceans. As the brine is heavier than the water around it, it sinks to the ocean floor while freezing the relatively fresh water it comes into contact with. This process lets the brinicle grow downward.

Occasionally, a brinicle may reach the sea floor as recorded in the video. As it grows, it catches various bottom-dwelling creatures around it, such as sea urchins and starfish.