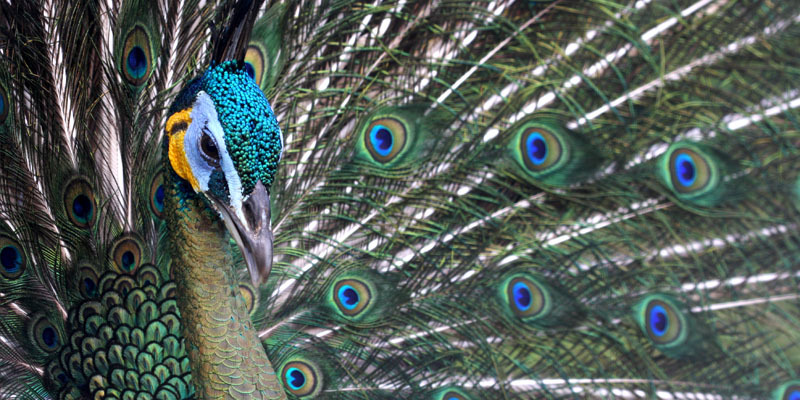 All Posts
For peacocks, a successful courtship requires more than an oversized appendage. The well-endowed males of the avian world need to know how to work the spectacle.
﻿

A peacock’s train feathers are arguably among the most well-known example of mating display in the animal kingdom. These iconic feathers are composed of the central shaft, loose barbs on its sides, and an “eyespot” pattern at the end of the shaft. To court potential mates, a peacock needs to rattle and shiver these train feathers in a certain way, producing a display of flickering feathers and distinctive noises.

It has been known that this courtship dance signals the fitness of the males, as the extravagant display requires energy and muscular power to perform. One study by Roslyn Dakin of the University of British Columbia, Canada, and her team inspects the biomechanics of this display.

By recording Indian peafowls (Pavo cristatus) using a high-speed video camera, the researchers studied two distinctive ways peacocks shake their train feathers. The videos reveal that the males rattle their feathers, producing a rattling sound and iridescence display as the loose feather barbs independently move back and forth. A second move, called “train-shivering,” is done by strumming their tail feathers against the train, causing the latter to sway left and right while the eyespots remain relatively still. The motionlessness of the eyespots is considered influential to the mating chance of a peacock.

Based on the recordings and laboratory measurements, the team of biologists and physicists discovered that the peacocks rattle their feathers 25 times a second, similar to the resonance of a guitar string. The team also inspected the microscopic structures of the eyespots, revealing that the barbs are held together tightly by microhooks. This structure allows the eyespots to maintain their solid shape while the rest of the train feathers shimmer as they move.

While there is no seen indication that size affects a male’s success, the team suggest that longer—therefore heavier—train feathers require more energy to shake. In order to perform the dance at the same frequency, a more endowed male will require extra muscle power and energy compared to the others.